Some more reviews for you. Ratings are from one to four. 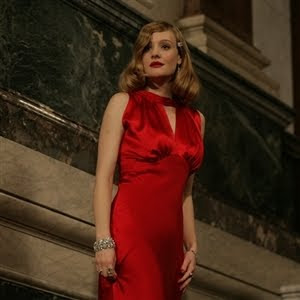 Summer 1939, and as much of Britain prepares for war, a shady cabal of aristocrats and Government officials plots to mollify Hitler and secure a quick, painless peace. When Anne Keyes (Romola Garai), the adopted daughter of a wealthy family, stumbles across the conspiracy, she finds her life under threat - as one by one her allies turn out to be traitors, or turn up dead. In his first feature for 10 years, writer-director Stephen Poliakoff deals with some weighty themes - fascism, adoption, familial loyalty - while alighting on fascinating aspects of the readying for war, such as pets being killed and heaped onto pyres. "It's like a vision of hell, isn't it?" asks Anne's father (Bill Nighy). "Animals going onto a fire in a quiet English summer." Despite its depth, though, Glorious 39 is really an old-fashioned thriller: engrossing and atmospheric, with a gnawing, ever-present sense of menace and some mightily effective set pieces.

The film does have its faults, floundering in the final 15 and closing with an atrocious scene that serves no purpose, beyond fulfilling a perceived desire for a happy ending and satiating Poliakoff's need to hammer the audience over the head with poorly-conceived pseudo-irony. In common with Close My Eyes (more of which below), it also has moments of stiltedness and artificiality that snap you out of the story. But for all that, I don't understand the hammering it's been given by most critics. Its Hitchcockian elements - the stomach-tightening tension piquing during a slew of well thought-out suspense scenes - are marvellously handled, and the film is also notable for Garai's expressive, layered turn, which catches the eye in a cast that includes Nighy, Julie Christie, Jeremy Northam, David Tennant and Jenny Agutter. And Christopher Lee, but I don't like him. (3)

I'd enjoyed Glorious 39 - my first Poliakoff film - so I decided to dig out the only other one of his movies I own. 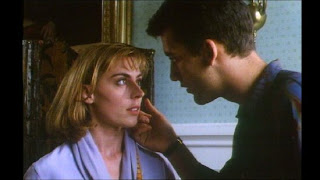 "I wish I could wake up happy." - Natalie (Saskia Reeves)

Close My Eyes (Stephen Poliakoff, 1991) is a troubling, intriguing, but sometimes superficial state-of-the-nation drama that attempts to have the last word on the 1980s. Saskia Reeves plays an aimless, unhappy young woman who marries a millionaire (Alan Rickman), then embarks on a passionate affair with her fiery, arrogant younger brother (Clive Owen). Though she can apparently turn the attraction on and off - an element that's insufficiently developed until the close - he is besotted, taking the AIDS crisis as further proof that he is doing The Right Thing. While this is primarily a portrait of sibling love, Poliakoff does have loftier ambitions as his screenplay encompasses compromised dreams (seen in the careers of its protagonists, and the broken idealism of city architecture) and the hollowness of contemporary priorities.

There's a moment in Lynne Ramsey's Morvern Callar, where Samantha Morton seems to capture just how peculiar and uncomfortable someone sounds in their own head when they're expressing a sensitive sentiment - in this case: "Shut up, he's dead." It's so unlike conventional acting that I've never been able to work out if she's doing it on purpose or has just mangled the dialogue with an atypical display of woodenness. Owen has a similar moment here, with a line that straddles the divide between glibness and profundity. "My boss is ill - he's got AIDS," he says simply. It's a particularly odd moment in a film that's littered with peculiarities and has a lot to say - not all of it entirely coherently.

With its striking, grim cinematography and bleak subject matter - punctuated with moments of wry humour - Close My Eyes plays like an embryonic version of Mike Leigh's dizzyingly brilliant Naked, which it predates by two years. In common with Glorious 39, it's a story of well-spoken people falling apart, lit by ever-present music, stately tracking shots and a curious interest in construction work as metaphor. Indeed, Poliakoff's fine visual sense is much in evidence, particularly in a breathtaking surrealistic opening. Acting-wise, it's a mixed bag, with a weak supporting cast but three strong leads. Reeves is the standout - absolutely excellent in a tricky part - with Owen as good as I've seen him and Rickman doing his considerable best in a role that tends towards caricature. A high (3), though definitely one to revisit.
Posted by Rick Burin at 13:29