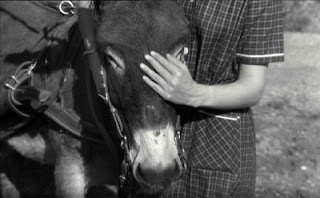 Au hasard Balthazar (Robert Bresson, 1966) is a deeply moving fable from Robert Bresson, telling the story of a donkey whose life is governed by human behaviour he cannot fathom. I've seen it three times now and it's as difficult to stomach as ever. The film is wise, incisive and often breathtakingly directed, but profoundly upsetting, possessing one of the most hateful, nigh-on unwatchable characterisations ever put on film: François Lafarge's sneering sadist. That's not a criticism of course, it's something of a commendation; but while the film is enough to enhance your life, it's also apt to spoil your weekend. Unfortunately, regardless of how you take to its methodical treatment of human cruelty, the movie is hampered in a more earthly sense by confusing plotting and narrative strands that don't go anywhere. Balthazar also introduces two problems for those of us who watch too many movies and feel compelled to comment on them: 1) How do you rate a film that elicits such a strong mixture of emotions (anguish, misery, empathy) but founders in its storytelling?; 2) How can you judge acting if the best turn of 1966 is from a performer who didn't know he was on camera - and is a donkey? Was Brando just fed hay and told where to stand by some Svengali-ish auteur with a visionary sense of mise en scène? Big-eyed Balthazar's glorious "performance" contrasts ideally with the blank, cold characterisations elsewhere, typical of Bresson, while the way he is employed as a symbol of sainthood is extraordinary. I spent a fair bit of the movie worrying that the donkey was being mistreated by the filmmakers, which would be a gruesome irony. Taken as a whole, the film has obvious faults, though the visual composition is sublime and it's full of fascinating, frequently unforgettable vignettes. (3) Yeah, there aren't many good stills knocking around from this one.

The first film version of My Sister Eileen (Alexander Hall, 1942) is admirably madcap, though it's just as effective during its (few) quieter moments. Aspiring writer Ruth (Rosalind Russell) and her wannabe actress sister Eileen (Janet Blair) flee Columbus, Ohio for New York, taking a rundown apartment in Greenwich Village and getting acquainted with some of the city's more colourful characters. Beginning, a la Nothing Sacred, with a great, self-contained comic sequence that puts paid to both girls' careers, the film then weighs in with some real heart, as the pair's stubborn, twinkly-eyed grandmother (the incomparable Elizabeth Patterson) comes to their aid. Set-up in the Big Apple, the sisters find they have to contend with an egotistical landlord (George Tobias), a seedy newspaperman (Allyn Joslyn), an American Footballer (Gordon Jones) hiding from his mother-in-law and a group of Portuguese sea cadets. All of them are at least slightly taken with Eileen. Not that Ruth is left out - she finds romance in the shape of magazine editor Brian Aherne, who's taken an interest in her slice-of-life stories. Despite the larger-than-life characters, the movie never grates, with enjoyable, imaginative plotting and a succession of great jokes. Considering it's based on a play, it's also fairly cinematic, at least as much as these Hall-directed Columbia comedies ever were. If you like this one, check out A Night to Remember, which has a similar setting (and possibly the same set, following a bit of tinkering), and also features Jeff Donnell (billed here as '(Miss) Jeff Donnell', to avoid any confusion) in a small role. (3.5)

Film of the weekend, though, was Smart Blonde (Frank McDonald, 1937), the first movie in Warner's mystery-comedy series, Torchy Blane. Glenda Farrell, familiar as a supporting player in countless Warner flicks, is Torchy, a fast-talking reporter who spars with cop boyfriend Barton MacLane as the pair investigate a murder. Though the mystery isn't that mysterious (genre buffs should be able to solve it by the halfway point), Farrell is nothing short of terrific, and her interplay with MacLane is spot-on. Factor in some sparky dialogue, cool, low-budget production and strong supporting characterisations by Addison Richards and Jane Wyman (as a scatty hat-check girl) and what you get is 58 minutes of sheer pleasure. I'm a sucker for B mystery-comedies (Charlie Chan, Boston Blackie, The Falcon, The Whistler, The Lone Wolf, Mr Moto, the list goes on and on) - and this is another series I can't wait to see more of. (3.5)
Posted by Rick Burin at 14:42