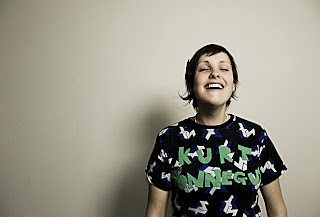 IT’S good to live in a world with Josie Long.

The daft, cheery and now politically-energised Kent-born stand-up is great company, and has the jokes to match her delightful stage presence.

High-fiving herself, shooting out her familiar catchphrase of “Am I right?” - and a new one, “Buckle me in” - she’s a bundle of energy, and her fresh, funny material has acquired an added bite.

As her touring show reaches its 16th date in the lovely surroundings of a Studio Theatre decked out like a ‘70s living-room, the audience is treated to no fewer than three cracking sets, courtesy of Long, potential star James Acaster and musician The Pictish Trail, a former pupil at St John Fisher in Harrogate.

Having walked on with a mug of tea, she duly distorts the cosiness of the image.

“I’ve brought my tea on. I put crack in it. But you’re supposed to smoke crack, so it has no effect. If anything, it’s just gritty tea.”

She promises extreme language, but assures the audience: “I have a big chubby face like a baby - so how can it count?”

And anyway, the show is going better than her date in Trowbridge. “I thought they were going to set us alight, ” she recalls.

Her first support act bounds onto the stage: gangly, curly-haired James Acaster, whose schtick is essentially ‘the funniest guy you knew at uni’.

Whizzing through material about skydiving - with memorable audience participation - safari parks and homies called Simon, he improvises wildly, and the effect is nothing short of sensational.

The lightning-witted comedian further engages the crowd with a chat about bands they’ve been in, before an inspired routine about a terrible gig in Stockport during his musical days.

Finding his audience consisted of two girls in pink puffa jackets, he attempted to back out, only for an ageing rocker on the bill to decide the show must go on, uttering the immortal words: “What if Paul Weller walks in?”

“Does he live in Stockport?” Acaster enquired.

“He lives wherever the hell he wants to live, ” the man replied.

The Pictish Trail appears scowling, with his hood up, before firing up a techno track with aggressively puerile lyrics. Suddenly it cuts out. “None of my songs are like that, ” he says jovially, breaking into some folk music with more than a whiff of ‘90s duo Arab Strap.

Talented, versatile and charmingly nervous, the Scottish-accented singer makes a mockery of his difficult position on the bill with an engaging set that’s stuffed with his trademark 30-second songs.

Then it’s over to headliner Josie Long, who starts the second half in character.

“Thank you for clubbing together to organise this chance for me to talk about my career as an astronaut, ” she says, explaining that she’ll be answering seven questions put on the NASA website “as part of their comedy festival”.

Handily recapping for stragglers, she reveals that she “first decided to go up space after having looked at the stars”.

It turns out the routine is based on a belligerent acquaintance.

“It’s essentially a protracted impression of my sister’s friend. And she’s not even an astronaut.”

The show proper is a hotchpotch of disparate routines - covering Conservatism, dream parents and the paparazzi - loosely tied together by the idea that until lately Long hadn’t been doing good in any meaningful way.

“Going to Glastonbury Festival is not in itself a political act, ” she wryly observes.

There’s also quite a lot of stuff about breakfast.

Long used to be a sceptic (“Oh OK, I’ll eat breakfast and later I’ll learn to drive... SQUARE, ” she exclaims), but has recently become a believer.

She devotes a sizeable portion of the show (pun very much intended) to Walter Ezell, a gay American who posted a photo of his intimidating morning meal on the internet every day for a year - “everything that’s good and everything that’s unacceptable about America... before nine in the morning”.

After fantasising about having Ezell, Billy Bragg or Nye Bevan as a father, Long begins to reminisce about life under Labour, which was “like hanging out with a dear old friend who you suspected had betrayed you”.

As the set develops, it becomes clear that she has become newly engaged with politics, finally having something to rail against.

Her response is a mixture of surrealistic fancy (suggesting George Osborne has taken the shape of a bird to attack her), four-letter words and genuine rhetoric, as she attacks the people who look like her, dress like her, but voted in the Tories.

It’s an arresting direction for a comedian whose ready wit and DIY sensibility - stretching to a photocopied programme and a pad of hand-drawn illustrative aids - have largely been targeted at more trivial subjects.

The slice-of-life gags are still intact (“Not everyone who talks to you wants to have sex with you. Women: be less paranoid. Men: stop it.”) and so are the ridiculous one-liners: she prefaces a joke about the Tube, a bugbear of non-London audiences, by describing it as “like an underground spaceworm”.