The Station Agent, floppy hands and Ewan McGregor as a cockney - Reviews #69

In the latest batch of reviews, I bring you a deceptively deep deep-space adventure, a couple of comedies, a London-set stinker and a total triumph. 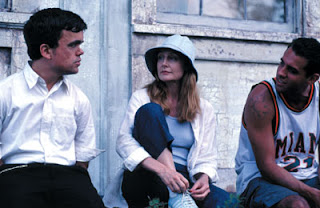 The Station Agent (Thomas McCarthy, 2003) - "When his only friend dies, a man born with dwarfism moves to rural New Jersey to live a life of solitude, only to meet a chatty hot dog". So begins the plot summary over at IMDb. I didn't realise the sentence had cut off and thought that was possibly the best basis for a film EVER. But even without a verbose sausage roll (it's actually a hot dog vendor), this is comfortably one of the best movies of the decade just gone, boasting as it does a revelatory performance from Peter Dinklage. He's the deceptively boring dwarf who ups sticks upon inheriting a dilapidated train station and finds friendship with the relentlessly upbeat temporary manager of a mobile eaterie (Bobby Cannavale) and a damaged middle-aged woman (Patricia Clarkson), mourning the death of her son. Working with a minimum of dialogue, Dinklage is simply remarkable: poignant and yet completely unsentimental, while unleashing a series of breathtakingly funny reaction faces that put him in the exalted company of Buster Keaton, Joan Leslie and Walter Connolly. The scene in which he talks about his anger at being born a dwarf is especially resonant when you discover that those were Dinklage's own experiences too - his ire and sense of injustice subsiding with age.

The film's undulating narrative is perhaps a touch too formulaic in its happy-sad-happy-sad structure, but one wonders how else you build dramatic tension, and it's difficult to fault the level-headed script, with its abundant humour, confident handling of potentially mawkish subject matter, and periodic hammer blows. Writer-director McCarthy also provides some distinctive visuals - often shot at Dinklage's level and making the most of his fascinating features - giving the film a backwards-looking sensibility as he casually evokes a lost age of steam, society and station agents, aided by Stephen Trask's spare, Cooder-ish score. It's a terrific piece of work and a must for anyone in thrall to first-rate acting and emotionally-resonant human drama. Even without a talking hot dog. (4) 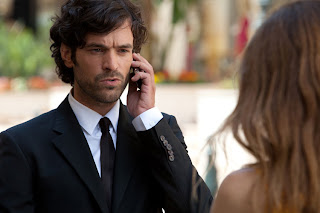 Heartbreaker (Pascal Chaumeil, 2010) is a breezy, intoxicating romantic comedy that's so fun - and so funny - you can forgive it for skimping a bit on the characterisation. Romain Duris is a professional charmer called in to split up unsuitable couples in a variety of guises - and using a multitude of tricks - though always ending with the same tried-and-tested spiel. Deep in debt, he takes on a humdinger of a case, pitching up in Monaco to coax Vanessa Paradis away from British philanthropist Andrew Lincoln just days before their wedding. The film does sometimes struggle to explain why Paradis should choose the deceitful (albeit smitten) Duris over the blameless Lincoln, but if you're willing to go with it, it's hugely enjoyable, with an inventive script, some super sight gags and an excellent turn from Duris, who's equally good at playing dashing, vulnerable and plain old silly. In support, Francois Damiens and Julie Ferrier - as Duris's partners in deception - make a really sweet couple. I liked it a great deal more than I expected to. (3.5) 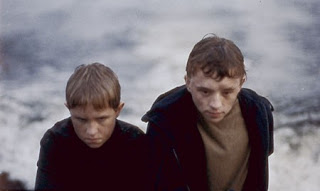 The Return (Andrei Zvyagintsev, 2003) is a bleak, slow and engrossing drama about two teenage brothers and the trip they share with their returning father, a taciturn, mysterious, often cruel man with an almost pathological desire to toughen them up. Beginning with a desperately moving vignette about the younger boy's inability to fulfil a dare set by some older neighbourhood kids, then changing tack entirely, the film is virtually impossible to second guess, as Zvyagintsev bucks convention and side-steps easy answers, before fashioning an ending that's gloriously unresolved but fitting - even perfect - in the Les quatre cents coups vein. It's a tough watch, because of its harshness and emotional brutality, and occasionally a little too ponderous, but the richly expressive photography is a major boon and the performances from the kids are just wonderful. Tragically, 16-year-old Vladimir Garin lost his life two days before the film's release, attempting to replicate the stunt he performs in the film's opening moments. (3.5) 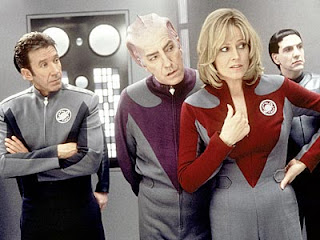 Galaxy Quest (Dean Parisot, 1998) - This isn't the disposable, one-joke affair its marketing campaign would have had you believe. Rather, it's a heartwarming comedy-drama about a group of lost, unhappy souls who shed their insecurity and self-loathing during an intergalactic road trip. Tim Allen, Alan Rickman and Sigourney Weaver are the stars of a cult sci-fi show, cancelled in 1982, whose plodding existence as convention attractions is invaded by fans from another planet. The problem: the silver-suited octopus-people with their wild speech patterns and floppy hands believe the show to be a historical document, and need the characters' help to defeat some big green badasses. The film starts off unpromisingly, with barely a joke or strong scene in the first half hour, but gets better and better, leading to a richly satisfying final 40 that mixes serial-like thrills (the metal punchers, the re-appearance of the rock monster) with emotionally weighty subplots. Weaver tends to get "being funny" confused with "just shouting", but Sam Rockwell is a standout as a self-reflexive genre buff convinced of his impending demise, and there's a nice performance from Justin Long as an enthusiastic nerd. He played a similar part in Die Hard 4.0, to contrastingly disastrous ends. (3) 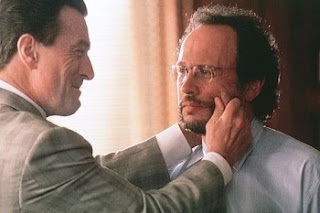 Analyse This (Harold Ramis, 1999) – The premise is good and the leads are quite fun, but the screenplay’s all over the shop, with a dearth of decent jokes and a plot that makes no sense. (2) 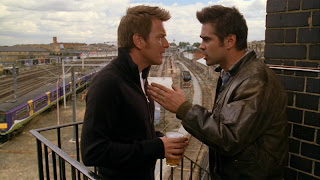 *SOME SPOILERS, ONE RUDE WORD*
Cassandra’s Dream (Woody Allen, 2007) – Oh Woody, you poor bastard. What have you done? And why? Ewan McGregor and Colin Farrell are Ian and Terry, cockney bruvvas with not entirely convincing accents who get in over their heads when their loveable, wealthy uncle Tom Wilkinson (like an older version of Joseph Cotten from Shadow of a Doubt) turns up and asks them to bump off troublesome whistleblower Phil Davis. Wilkinson’s actually OK and there are a couple of tense moments (I’m a sucker for that someone’s-somewhere-they-shouldn’t-be gimmick), but the acting from McGregor and Farrell is utterly laughable and Woody’s script is ear-shreddingly horrendous, a potent fusion of banality, risible plotting and toe-curling one-liners. The characters call each other “Terry”, “Ian” or “Uncle Howard” at the end of almost every exchange; that’s how we speak in England. We also say “I’ll give you a phone”, if we’re going to ring someone. On top of all that, Woody inexplicably makes Sally Hawkins talk in that going-up-at-the-end-of-a-sentence-scally-Lahndahner voice that Lucy Punch does in his latest. I interviewed Jim Carter last year and asked him about working with Woody on this. He said he’d like to draw a veil over it and that the movie was "a turkey”. He’s not wrong. (1)

Note to people with finite amounts of free time: It's really not worth it. I've seen all of Woody's movies as director as this is by far the worst thing he's ever done.

See also: To peruse other recent Woody efforts, follow these handy links: Whatever Works (2009), You Will Meet a Tall Dark Stranger (2010). To read about his masterpiece, Hannah and Her Sisters, clicky here and scoot down to the bottom of the guide.
Posted by Rick Burin at 17:03