Buster Keaton, bouncing and why 'nice' is good - Reviews #61

It was my birthday this week and I was lucky enough to get Eureka's superlative Buster Keaton 1918-23 short films box-set from my girlfriend (is this the greatest thing ever released by anyone?), along with several '40s and '50s films. We started with: 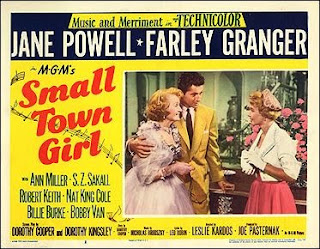 Small Town Girl (László Kardos, 1953) is virtually unknown today, but two of its musical numbers have gone on to enjoy a life of their own. One is Ann Miller's 'I've Gotta Hear That Beat', included in the '70s smash-hit MGM compilation That's Entertainment!, which sees her prancing around a Broadway stage in that genuinely inimitable manner (and believe me, I've tried), accompanied by a string and brass section consisting only of arms thrust through the floor. The other, referenced in adverts and music videos and selected for That's Entertainment, Part II, is Bobby Van's spectacular four-minute jumping routine, in which he bounces around the whole town, shaking hands, banging dustbin lids and leaping over hedges. Beyond the simple joy of the spectacle (though it's worth noting that, rather subversively for the studio, Van is celebrating not having to get married), it's an impressive feat of endurance. Some of the takes within it are more than a minute long, which must have absolutely caned his knees and shins. With Tommy Rall and legendary choreographer Bob Fosse, Van was one of the trio of hoofers who lifted Kiss Me Kate from something very special to arguably the greatest MGM musical of them all, and he played a key part in another of my favourites, the blissfully entertaining college-set songfest The Affairs of Dobie Gillis, opposite Fosse and Debbie Reynolds.

Small Town Girl itself is fairly typical of producer Joe Pasternak's less thematically and creatively ambitious movies, which regarded small-town values as sacrosanct (as epitomised by Jane Powell), while somewhat contradictorily backing those who wanted to decamp to the big city to make something of themselves (like starry-eyed Broadway hopeful Van). The narrative is ye olde chestnut of a selfish urbanite - in this case boy racer Farley Granger, who passed away last month - getting trapped in an altogether more insular, innocent, slower-paced world, and being completely won over, thanks in part to a certain special lady. You think it might have been an influence on Doc Hollywood and Cars? I think you might be right.

Andre Previn famously said Pasternak had the "gift of mediocrity": never hitting the heights of a genius like Gene Kelly, but knowing what punters wanted and unfailingly giving it to them. I'm not sure that's quite true. Even aside from unassailable non-musical endeavours like Destry Rides Again and The Flame of New Orleans, several of the producer's films look simply wondrous today. Particularly Three Smart Girls - the intoxicatingly vibrant vehicle that launched teen singing sensation Deanna Durbin. And even after joining MGM in 1942 and slipping into a groove of fairly formulaic fare, Pasternak broke off to make trend-setting and artistically important smash-hits like The Great Caruso and Love Me or Leave Me, finding new protégés in Kathryn Grayson, Jane Powell and Mario Lanza, while giving Doris Day the opportunity - and the encouragement - to obliterate her screen image as vampy chanteuse Ruth Etting, opposite James Cagney's despicable crime lord, Moe Snyder.

Small Town Girl is one of Pasternak's safer endeavours; there are no morally repugnant gangsters on show here. It's a charming and straightforward musical full of pleasant characters, in which nothing too bad happens and the guy in need of reforming is just a bit of a flash git. To some, the existence of a film in which one of the characters has dimples, people go to church and no-one gets shot in the face is the gravest insult imaginable, and one they can only compute through a torrent of caustic cynicism. Let's ignore them, shall we? There's nothing wrong with 'nice' - on the screen or off it. 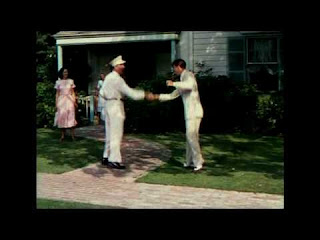 He's about to start bouncing again.

First up, the diminutive Powell is a very attractive lead on which to hang such a virtuous film. Sweet and engaging without being overly naive, she was a gifted soprano, a fine hoofer (though she only dances once in the film, presumably because she was pregnant during filming) and could spark off anyone. Even Granger, who's not really putting in the effort here. Considering his character is a smug, devilishly appealing six-footer with hazel eyes called Rick, I didn't warm to him at all. Not that it matters, though, thanks to Powell and a supporting cast that includes such welcome faces as S. Z. "Cuddles" Sakall (Carl, the waiter, in Casablanca), Robert Keith, Billie Burke, Chill Wills, King Kong screamer Fay Wray, two scintillating specialty dancers - Miller and Van - and Nat "King" Cole. Some of the comedy is disarmingly funny, especially the interplay between Sakall and screen son Van.

The numbers were staged by the incomparable Busby Berkeley, the chap who created those eye-popping kaleidoscopic dance numbers in 42nd Street and the Gold Diggers series, later adapting these into 'water ballet' set pieces for Esther Williams' aquatic escapades. In addition to Powell's enjoyable vocal performances, several with a backing choir, we get her routine with Van ('Fine, Fine, Fine'), his two solo spots - the bouncing and 'Take Me to Broadway', which is simply phenomenal, as he skips and taps around a grocery store - and Miller's shaky-shaky one-two of 'I've Gotta Hear That Beat' and the lyrically-nondescript 'My Gaucho'. Still not enough? Then here's Nat "King" Cole, somewhat incongruously slapped into the narrative with a syrupy-voiced nightclub rendering of 'My Flaming Heart'. Ooh yeah.

You can quibble with Small Town Girl's flimsy narrative - which has been utilised more effectively elsewhere - and look at Granger with a beseeching expression that says: "Come on, you were amazing in They Live by Night; could you try a bit harder?", but this is still top entertainment: an immersive diversion with a winning atmosphere and a stack of knockout musical numbers. So shut your face, Previn, you're mediocre*. (3.5)

*That's obviously not true, you're clearly very talented, but just give Pasternak a break.

The observant ones among you will notice that I just wrote 900 words about an old musical. I would apologise, but who's to say it won't happen again very soon?

I'm planning to watch the Buster box-set from start to finish, as that sounds like my idea of fun, but I couldn't help putting on Cops first, as I hadn't seen it in ages. 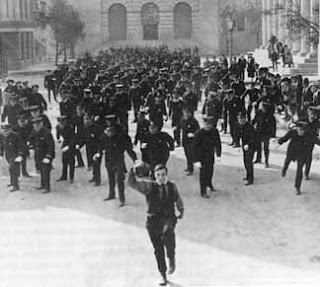 SHORT: Cops (Edward F. Cline and Buster Keaton, 1922) is just brilliant. Once more, Buster is on the run, though unlike The Goat, the chase sequence is limited to the final five minutes. In that sense, this is more like one of his later features, with the acrobatics and extraordinary physical feats (grabbing a passing car and exiting horizontally, flipping along a perilous plank) offset by simple-but-sublime observational gags. Like stamping on a vase to make it fit into a suitcase. When we get to the frenetic finale, which has five or six of the best sight gags you'll ever see, there's an obvious parallel with Seven Chances, though in that masterpiece the identikit hordes pursuing our hero would be changed from thick cops to greedy would-be brides (see below). My favourite joke (and I'm sure this will definitely work just as well in text form) is the one that sees Buster trying to negotiate his way past a single cop, as we see dozens amassing behind him. As he turns around to face them, his only acknowledgement of their presence is to instantly change direction again, legging it off the right hand side of the screen. There's also an inspired twist ending, with the accent on weary resignation. If you want to be immediately converted to Buster's genius, check out The Goat, but if you're already a fan, this is yet more validation of your wise lifestyle choice. (4) 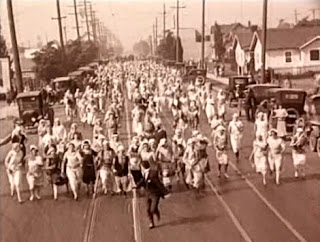