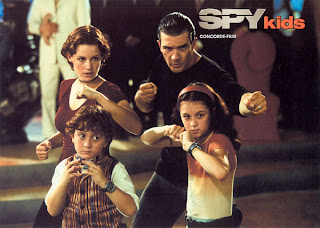 Spy Kids (Robert Rodriguez, 2001) – This is a wonderful children's movie: intelligent, wildly imaginative and with plenty of heart. Daryl Sabara and Alexa Vega are appealing as the troubled kids whose tedious suburban life is turned upside down by the revelation that those bedtime stories were real, and their parents (Carla Gugino and the excellent Antonio Banderas) really are super-agents. Now all they have to do is travel to the remote island castle of an eccentric kids TV presenter (Alan Cumming) who's imprisoned their mum and dad, fight some henchman made of giant thumbs and defeat an army of robot children. Rodriguez, who also scripted, edited and co-scored, perfectly juggles the diverse elements, creating a movie that's as funny, entertaining and original as any live-action kids' film of the last 20 years. From the super-stylised pre-credits sequence - showing Gugino and Banderas gettin' it on - to the heartfelt post-action pay-off, this is something very special indeed. (4) 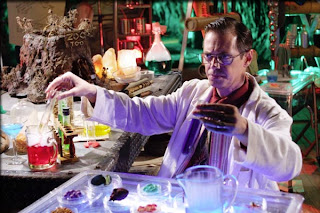 Spy Kids 2: The Island of Lost Dreams (Robert Rodriguez, 2002) is an absolutely exceptional sequel that takes all the best elements of the first film - humour, warmth and pencil-moustaches - and throws in some giant hybrid animals and Steve Buscemi as a mad scientist, with predictably awesome results. Sabara and Vega return, this time battling a shadowy power-crazed villain, while trying to out-do a pair of rival, showboating spy kids. As you might expect, their quest involves camping out on an island populated by oversized beasts, like a 20ft half-spider/half-gorilla. Not to mention several Harryhausen-homaging sword-fighting skellingtons. Rodriguez expands his scope, adding romance and another generation of super agents (Ricardo Montalban and Holland Taylor as Gugino's parents), without diluting the sense of wonder, excitement or emotional clarity. My favourite gag is the little toddler weighing into the fight at the awards dinner. In the spirit of full disclosure, I should add that the musical end-credits sequence is rubbish. (4) 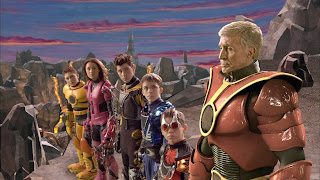 Yes, it really is this rubbish.

*SPOILERS*
Spy Kids 3: Game Over (Robert Rodriguez, 2003) is an inexplicably dire third outing that takes place largely in a virtual-reality universe, flinging things audience-wards in a way that apparently realises the full benefits of 3D, while ignoring all of cinema's other possibilities. Juni (Daryl Sabara), now an ex-super-agent, is forced to return to the fold after his sister is frozen in a video game by slurring megalomaniac Sylvester Stallone, cueing a series of terrible CGI set-pieces. There are a couple of laughs, including the appearance - and then swift demise - of The Guy (a surprise cameo), but the film is full of superficial sentimentality and entirely devoid of magic or invention, trading idly on the goodwill from the first two movies. Disappointingly, Sabara plays Juni as if he were a different character: self-consciously cool, and lacking in the nerdy appeal essential for the part, while the sequences with Stallone and his unfunny alter-egos are beyond parody. This is like watching someone else play a video game for 80 minutes. (1.5) 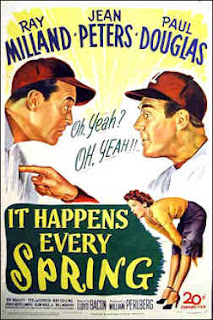 At no point does this, or anything like this, happen.

It Happens Every Spring (Lloyd Bacon, 1949) is a sporting comedy that takes a fun premise and knocks it out of the park. Ray Milland plays a professor who inadvertently discovers that his new solution can keep baseballs away from bats, launching him on a wildly successful pitching career. It's clever, atmospheric, amusing and sometimes very tense, with some thoughtful things to say about hero-worship and America’s obsession with its national game, an excellent supporting performance from Paul Douglas and a particularly satisfying ending. (4) 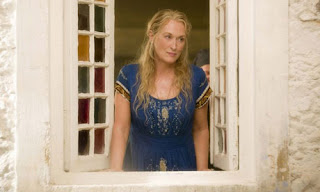 Oh shut up. Your character makes no sense.

Mamma Mia! (Phyllida Lloyd, 2008) - This has put me off Abba. And Julie Walters. And possibly cinema itself. I couldn't stand anything about it, from Meryl Steep's grating singing and "look at me, I can be fun" characterisation to the teeth-achingly dreadful script - which crowbars the numbers in with staggering artlessness - witless staging and uniformly annoying performances. Except Colin Firth, he was kind of OK. Without hyperbole, the worst film I've seen for two years. (1)
Posted by Rick Burin at 08:08