Just the one review in this update, as I can't wait any longer to tell you about the spectacular... 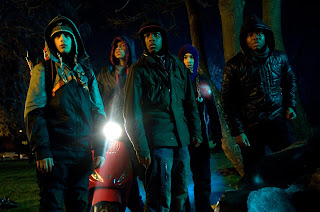 CINEMA: Attack the Block (Joe Cornish, 2011) - The first film from Joe Cornish, one half of cult broadcasting duo Adam and Joe, is a vital horror-comedy that pitches a teen gang against a breed of hairy aliens with glow-in-the-dark teeth. It begins with a mugging, as nurse Jodie Whittaker has her phone, wallet and ring taken at knifepoint by five hoodies. No sooner has she fled the scene than an alien falls from the sky into a parked car. The kids kick it to death. Then its mates turn up.

This is an incredibly assured debut, with unpredictable plotting, stylised dialogue and characters you really care about, once their frailties are laid bare. Cornish has acknowledged his debt to '80s "creature features", but the film this most recalls is John Carpenter's action classic Assault on Precinct 13 - albeit set in London, and with added aliens - as a gaggle of disparate, untrusting souls band together to combat a greater threat, and an unlikely, initially dislikeable hero emerges.

While Whittaker is excellent and the supporting players are uniformly fine, the standout performance unquestionably comes from John Boyega as gang leader Moses, with his sullen expression, Adidas-three-stripe-style facial scar and burgeoning understanding of his growing responsibilities. He's a fantastic character and Boyega nails his myriad complexities: his insecurity and feeling of persecution alongside his bravery, resourcefulness and sense of honour.

Cornish also has a natural gift for choreographing action, leading to a series of frenetic, energetic, perfectly-paced set pieces. Indeed, that vitality and invention runs through the whole film, from its "big alien gorilla wolf monster" baddies to the Union Jack reveal: an iconic shot, informed by Roger Moore-era Bond, at the heart of a stunning finale.

Perhaps the subplot about middle class drug dealer Luke Treadaway was a bit of a misstep - although funny in itself, it slows proceedings - but everything else about this punchy, idiosyncratic slice of genre fun is absolutely dead-on. It's also a thrilling counterpoint to establishment fare like The King's Speech, without a royal carriage or quietly-emoting monarch in sight. And it has the best final five minutes of any film in recent memory. (4)
Posted by Rick Burin at 20:20