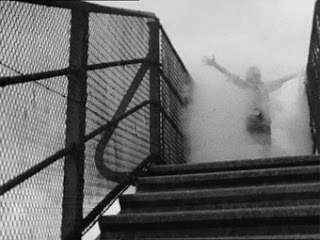 My Childhood (Bill Douglas, 1972) just blew me away. Douglas made only three short features and the socio-political epic Comrades before his untimely death at the age of 57. This, his debut, is a grainy, uncompromising slice of neorealism – the closest British cinema has come to a Bicycle Thieves or Pather Panchali – shot through with sincerity, compassion and a unique eye for poetic detail. The performances from the two kids (who both died tragically young) are breathtaking and the scene in which the elder, Hughie Restorick, spins and dances atop a bridge in swirling, billowing train smoke is a shot of pure joy in a film dominated by monochrome sadness. (4) 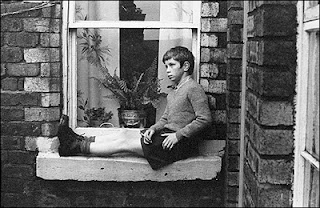 My Ain Folk (Bill Douglas, 1973) isn’t quite as good – it’s a bit too plotty and relies excessively on interiors – but then what is? Douglas’s second film remains a wrenchingly powerful portrait of financial and emotional poverty, amidst the coal mines and crumbling families of rural Scotland. As the director’s on-screen alter-ego, Stephen Archibald gives another superb performance: the troubled youngster had a naturalism and subtlety you rarely come across in juvenile acting. And the film's opening – juxtaposing the cosy, Hollywood sentimentality of MGM’s Lassie Come Home (set in Yorkshire) with the grim reality of post-war Britain – is an absolute knockout. It presumably informed near-contemporary Terence Davies’ subsequent forays into film. (3.5) 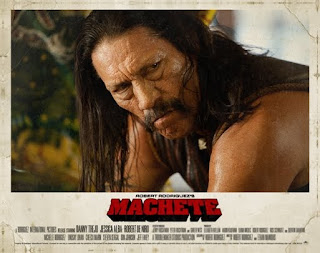 Machete (Robert Rodriguez, 2010) grew out of a fake trailer made as part of Rodriguez and Quentin Tarantino's Grindhouse project. There was a huge clamour to see this stylised, uber-violent, non-existent high-concept flick; so now here it is. Unfortunately, in fleshing out the concept, Rodriguez has somewhat overstretched. In 2003, the director seemed to tire of making pure entertainment in the vein of El Mariachi and From Dusk Till Dawn and began to use his privileged position to bang the drum for democracy, decency and Mexico. An admirable goal; he's just not very good at it. And it means his revenge thrillers - whether glossy (Once Upon a Time in Mexico) or trashy (this one) - are painted on far too broad a canvas, replete with uninspiring speechifying and saddled with countless extraneous subplots, which frequently veer towards melodrama.

So while the central story of machete-wielding Danny Trejo going on the rampage is very fun, the parallel thread about immigrant-killing senator Robert De Niro and his devious aide is embarrassingly silly. And Jessica Alba's narrative is like Traffic remade by CBBC. On the plus side, there are a heap of explosive action sequences with grisly pay-offs (the opener is a stunner, while another sees Trejo using a man's intestines as a rope) and the ensemble is impressive, with Rodriguez drawing on his stock company of Trejo, Cheech Marin, Daryl Sabana, Tom Savini and Jessica Alba, and attracting De Niro, Don Johnson (complete with a jokey "and introducing..." tag), Jeff Fahey, Lindsay Lohan, the ever-excellent Michelle Rodriguez and the never-excellent Steven Seagal. All in all, it's an enjoyable film - with a few truly triumphant moments - though the coupling of exploitation-style mayhem and heavyhanded liberalism remains an incongruous one. And the huge action climax is as deadening as the one in Desperado. (2.5)

Trivia notes: Trejo also played a character called Machete Cortez in the Spy Kids series. No-one's quite sure if this is a spin-off. My guess is that it isn't. The end credits here promise two sequels, entitled Machete Kills and Machete Kills Again. Apparently this is serious. Awesome. Let's just have a small-scale thriller next time, shall we? Please? 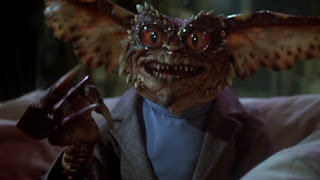 Spoofy sequel Gremlins 2: The New Batch (Joe Dante, 1990) has little story to speak of, instead offering a string of comic scenes as those little green bullies run amok in a futuristic office block, raiding Christopher Lee's genetics lab and emerging with bat wings, eight legs or a plummy voice and a doctorate. It's not a patch on the first film and Gizmo's story thread is a bit hard to take, but there are some funny and imaginative moments, and a couple of great lines. "We could have had three shrinks and a plastic surgeon in that space," says building owner John Glover of the genetics centre. "But no..." (2.5)

Trivia notes: When Gizmo is asked about his grandfather's death, he responds by bleating: "Keye Luke", the name of the screen legend playing the old man. I thought that was nice. 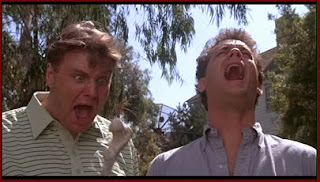 The ‘burbs (Joe Dante, 1989) – Are those guys down the street really murderous Satanists? They certainly seem a bit, well, German. There are a few pointed observations about small-town American life here, but this horror-comedy is a bit light on both jokes and thrills. I laughed three times; at a pratfall, Corey Feldman stalling the police and Tom Hanks’ bemused one-liner: “I've never seen that. I've never seen anybody drive their garbage down to the street and bang the hell out of it with a stick. I... I've never seen that.” Carrie Fisher provides an engaging characterisation as Hanks’ matter-of-fact suburban wife. But while The ‘burbs is pleasant enough, it never really gets going. Also, Bruce Dern is rubbish in it. (2.5) 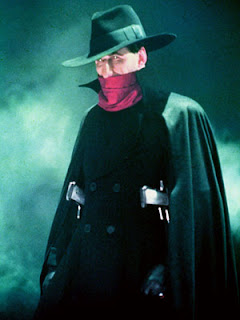 The Shadow (Russell Mulcahy, 1994) – This big-screen version of the old radio show, previously done as a serial in 1940, has a lot going for it: the spectacular ‘30s art deco production design, a fascinating presentation of a complex hero (Alec Baldwin) and a smart romance, which sets up our reformed warlord with a fragile, telepathic girl who could prove his undoing. Sadly it’s hamstrung by a ridiculous adversary – a psychotic descendant of Genghis Khan who kills a taxi driver for knowing his whereabouts, then guffaws about it at deafening volume, in full body armour, in the middle of the street – along with a bafflingly inconsistent script that breaks into wisecrackery at the worst possible moments. That's massively disappointing, as this could have been something genuinely special. Still, Peter Boyle is fun in support as Baldwin’s trusted chauffeur and the runaway bomb was a nice touch. (2.5) 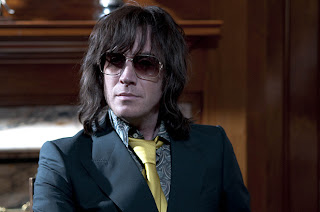 Mr. Nice (Bernard Rose, 2010) is a straightforward biopic of Welsh drug smuggler Howard Marks (Rhys Ifans), with a good cast and the odd memorable scene, including a potential kneecapping at a farmhouse and a couple of nice courtroom fib-athons. Ifans is quite effective carrying the piece – he’s in virtually every scene – though the best work comes from David Thewlis as a Provisional IRA member with a bit of a temper and Christian McKay (one of my favourites), in a small role as a MI6 operative. The film generally avoids the dreaded weed-is-cool posturing (to which the only possible response is a great big yawn), limiting it to just the opening and closing reels. Marks' cameo as a Dutch coffee shop owner ended up on the cutting room floor, before someone picked it up and put it on the DVD. (2.5) 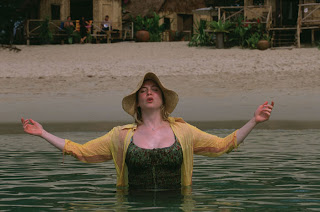 What's happened here is that she's accidentally taken magic mushrooms. No, that isn't very funny and, yes, it is fairly typical of the script, but enemy-of-the-tabloids Hugh Grant makes me laugh.

Bridget Jones: The Edge of Reason (Beeban Kidron, 2004) is a step up from the original (stay with me here), as at least it’s fairly funny. Well, sometimes. Caddish Hugh Grant and uptight Colin Firth provide all the laughs, though Zellweger acquits herself well, considering she hasn’t an amusing bone in her perpetually perky persona. (2) 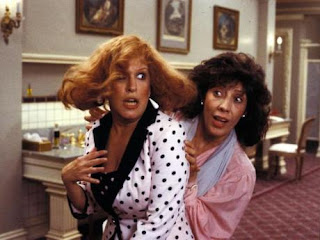 It's approximately as fun as it looks.

Big Business (Jim Abrahams, 1988) is an amiable but laughless would-be comedy about two sets of twins, separated and mixed up at birth, who are on opposing sides of a business deal that threatens a rural community. Bette Midler and Lily Tomlin do their best in dual roles – the latter sharing an affecting romantic scene with rough-hewn Fred Ward – but the material is very thin, as the look-alikes take to simply wandering around the Plaza hotel, getting mistaken for one another. (2) 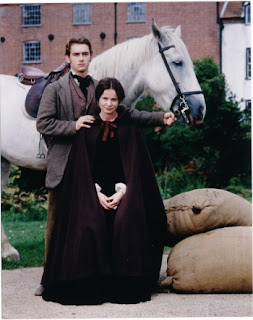 TVM: The Mill on the Floss (Graham Theakston, 1997) is a disappointing BBC period drama, worth seeing only for Emily Watson's brilliant performance. This was the teleplay she made shortly after von Trier's Breaking the Waves, the devastating drama of faith and sexual degradation that catapulted her to fame. She plays Maggie Tulliver, a young woman whose existence is dominated by love for her changeable brother and a booming conscience that won't let her find happiness at the expense of others. Watson's depth and clarity of expression is like nothing else I've ever seen and whenever she's on screen the piece sparks into life. But the story is essentially uninteresting - concerning the rivalry between a mill owner and his neighbour - most of the other performances are weak and the script is particularly poor, with little dramatic coherence and chunks of sloppy exposition. (2)
Posted by Rick Burin at 12:05