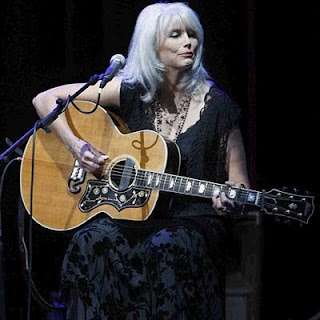 For one number she has us worried, her remarkable Southern wail faltering, stuttering, even failing as she struggles to weave a tale of hard work, boozy nights and guardian angels. Her voice sounds broken, some words barely emerging at all.

Perhaps time has overhauled the great harmoniser, the constant reinventer, the Queen of Country. Perhaps it's robbed her of her powers.

Then Emmylou Harris breaks into a spellbinding version of Orphan Girl and we breathe a sigh of relief. She probably just doesn't warm up that much anymore, and it takes an iffy reading of the disposable Six White Cadillacs to shake the cobwebs out of her voice.

From then on in we're cooking, as Harris - her snow white hair against an all-black outfit of hair band, dress complete with a puffy, uneven skirt and ripped stockings - provides a proper, ole-time show. Her latest might be called Hard Bargain, but there's no short-changing here: a two-hour show that takes a tour of her sizeable back catalogue, with two-thirds of the new record thrown in alongside. And she's supported by an exemplary five-piece band, the Red Dirt Boys, including a superb lead guitarist.

Hard Bargain isn't up there with cast-iron classics like Pieces of the Sky, Elite Hotel and Wrecking Ball - all of which are represented tonight - but it does have one truly great song, the opener The Road, which pays tribute to the much-missed alt-country genius who gave Harris her break, Gram Parsons.

Her version tonight is arresting and emotive, and follows a heart-stopping take on The Death of Emmett Till - a backwards-looking Civil Rights ballad. On record these songs sound cloistered: shrouded in atmosphere and mystery. Here they're played straight, stripped of such sonic complexity, and the results are fascinating. Other new songs like The Ship on His Arm, Home Sweet Home and Goodnight Old World are lyrically unambitious but extremely tuneful, and frankly Harris could sing a Black Lace medley and make it sound mournfully beguiling.

The only duff number is Big Black Dog, a song that resolutely works on only one level. It is just about a dog. "Bella, Bella," Harris intones. "She's not brown and she's not yeller." Indeed. That would be a wasp.

Harris tells us, with a grin, that the idea of the show is to push the new record - but also to revisit some songs she hasn't played in years. Early highlights include the tender, tragic Beneath Still Waters, a sweet duet with mandolin-player Rickie Simpkins on If I Needed You and a buoyant Hello Stranger.

She visits Pieces of the Sky for a slow, sensational rendering of Boulder to Birmingham ("You have ESPN," she tells an audience member who screams a request immediately before it appears in the set), then plays the old Parsons song Luxury Liner, which is given a boisterous treatment. Harris is enjoying her vowels, though sometimes so much that she can't quite get the next word out quickly enough. Ah well, no matter, it's all great fun.

In addition to the astonishing Orphan Girl, her 1995 masterpiece Wrecking Ball, produced by Daniel Lanois, is represented by Every Grain of Sand, arguably the most wonderful song Bob Dylan has ever written. While the new songs are tailored to Harris' changing voice, which lacks the range, power and crystalline clarity of old but compensates a la Billie Holiday through its crackling charge, many earlier numbers are given a thorough revamp: a new arrangement, an altered style, a different emotion. Every Grain of Sand is shorn of its fragility, becoming sturdy and confident, with a pulsing bass drum that mounts in intensity as the chorus blasts into view. Pretty amazing.

Harris climaxes with a succession of unsung, knock-out numbers: an acapella Bright Morning Stars, sung in a trio, the tranquil Shores of White Sand, relative rarity The Pearl, '70s ballad Together Again and hit single Born to Run, which is comfortably the second best song ever called Born to Run.

The crowd whoops for more and gets it, the 20-song plus set finishing with Old Five and Dimers Like Me and a yearning but catchy take on the Parsons/Chris Hillman number Wheels. The crowd rises as one, to give this rare talent a standing ovation. She looks really chuffed. That unique voice is still doing just fine.

I can count the number of really good support acts I've seen (excepting those I already knew: Mansun, the Super Furries and so on) on one hand and still have a finger left over: VV Brown (who blew co-headliners Florence and the Machine off the stage and up the street), '90s rock band Daytona, Little Lost David and Josephine Oniyama - when she was a Tracy Chapman-ish acoustic balladeer and not a dancehall diva. And I suppose Audioweb and Del Amitri were OK. That's in 17 years, and I'm quite a positive person.

Now add to that exalted list: Simon Lynge, an Inuit, Greenland-born singer-songwriter with a fantastic voice and a handful of really strong songs. His killer number is Love Comes Back to You - which attracts a massive response - but there isn't a weak song in his set, which includes the title track of his first album, The Future, Love Is an Umbrella and a superb version of (Sittin' On) The Dock of the Bay. That's not actually a very hard song to sing (try it the next time you're doing karaoke), since the range of notes is small, meaning you can focus on the old soulful expression.

But it is hard to sing if you insist on changing the tune, whacking out the rhythm on your guitar and singing half the song in an outrageous, powerful falsetto. Which is what Lynge does. He's clearly a major talent and I hope he gets the breaks. Well, he's touring with Emmylou Harris, so he is clearly getting the breaks. He reminded me a bit of Jeff Buckley and no-one reminds me of Jeff Buckley. Except Tim Buckley.

Lynge talks about Greenland a lot. Go see him.
Posted by Rick Burin at 19:47