Another reviews round-up. Three films I'd seen before, then a few I hadn't... 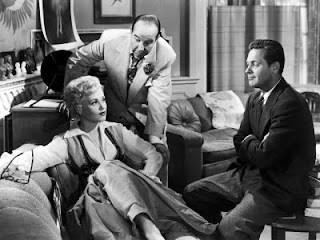 Born Yesterday (George Cukor, 1950) - Even without Judy Holliday's astonishing characterisation, this might have been something special, with Garson Kanin's brilliant script - intelligent, forceful and so witty the rest of us may as well just give up now - and note-perfect turns from William Holden, Broderick Crawford and Howard St. John. That it also contains one of the three or four best female performances in American cinema in the shape of Holliday's endearing, eye-wateringly hilarious Billie Dawn is something of a bonus. She's a former chorus girl ("I also spoke lines. Ask me how many. Five") who's become the moll of a hulking scruple-vacuum (Broderick Crawford) in Washington to promote his latest shady deal. Embarrassed by her general ignorance, he hires crusading freelance journo Holden to smarten her up, but isn't ready for what happens next. Adapted by Kanin from his celebrated play, which Holliday starred in on Broadway, it's a dazzling film: a flawless metaphor about the working classes and the emancipating power of knowledge posing as an utterly delightful romantic comedy. (4) 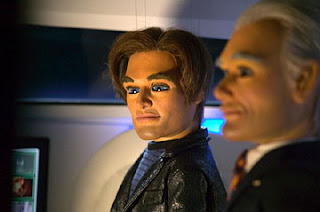 Team America: World Police (Trey Parker, 2004) - Well, it's clearly not perfect. There are a couple of jokes that push too far for me (shall I explain why rape isn't funny?), at least two duff songs and a surfeit of tedious material about Hollywood liberals, but despite all that, this is a fantastic film: brilliantly funny (as much so as any film I've ever seen) and often devastatingly satirical. The quotable lines and inspired sight gags are legendary - and legion. The hammer, the walk-out, the bit where Chris says: 'That's Carson's replacement? A fucking actor?', the undercover distress signal, the corporation-y corporations, "I promise I will never die", the vomit geyser (the hardest I have ever laughed in a cinema) and Gary's climactic monologue. I've watched the film five or six times now. This time I had a bad back and every time I laughed it hurt a little more. By the end I was in absolute finger-biting agony. It's that good. (4) 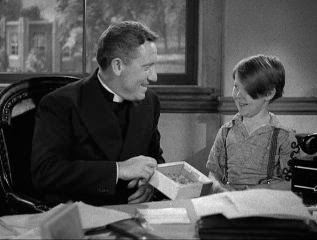 Boys Town (Norman Taurog, 1938) - So Who Framed Roger Rabbit? was "groundbreaking", was it? Released a whole half-century before, Boys Town also features a mugging, gurning cartoon interacting with real-life humans. Mickey Rooney. His hysterical, one-man assault on the realism of the piece leads it somewhat astray. I'm a big fan of Rooney (particularly his work in The Human Comedy and National Velvet) and he excels in the straightforward emotional stuff here, but surrounded by naturalistic performers like Spencer Tracy and Bobs Watson he opts to play the rest of the film with a scenery-devouring style of acting that does away with much of the titular village. Tracy won a deserved Oscar as Father Flanagan, the real-life priest who established a home for lost boys, with Rooney playing Whitey Marsh, his toughest case, Watson as the diminutive, charming Pee Wee, who "likes everyone", Gene Reynolds (Ted Nickerson in the Bonnie Granville Nancy Drew series) as the current mayor, and Henry Hull as Tracy's friend and sponsor. There are dozens of wonderful scenes and deeply moving moments - the opening scene is an absolute knockout, and Pee Wee's toothbrush tale is another - it's just a shame that someone didn't rein in Rooney's excessive posturing. I still think it's a lovely film. Some deride it as corny or sentimental, but I think that's rather the point. (3.5) 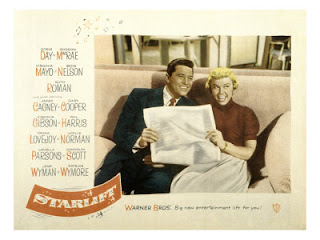 Starlift (Roy Del Ruth, 1951) - A handful of superb musical numbers lift this propagandist musical, which is like a live action recruiting poster for the air force; and one which finds time to repeatedly plug Louella Parsons' Hollywood gossip column. The best see bear-like Baloo-voicer Phil Harris narrating a saloon story with Gary Cooper as a Texas Ranger, Day duetting with familiar foil Gordon McRae on 'You're Gonna Lose Your Gal', and Gene Nelson and Janice Rule doing 'It's Magic', complete with a succession of neat conjuring tricks and optical illusions. Del Ruth, who began his career at Warner helming Pre-Code comedies like Blessed Event - starring Lee Tracy - and Blonde Crazy shows little of his trademark razzle-dazzle and pacy panache, but the songs and some fun cameos (including Cagney being teased by a Cagney impersonator) make it. (2.5)

And another thing: Starlift is available as part of the TCM Spotlight: Doris Day Collection, which I got from my girlfriend for Christmas. It's a Great Feeling is also on there and is a must for Hollywood-on-film buffs, or indeed anyone else. It's a truly joyous mix of music, comedy and insider references, with a roll call of gag appearances that includes Coop, Patricia Neal, Edward G. Robinson, Eleanor Parker, Joan Crawford, Sydney Greenstreet, Danny Kaye, Ronald Reagan and Jane Wyman, along with directors David Butler, King Vidor and Raoul Walsh! There's also an AMAZING surprise cameo that I won't give away. That was among the best movies I saw last year (#38 on the list here). 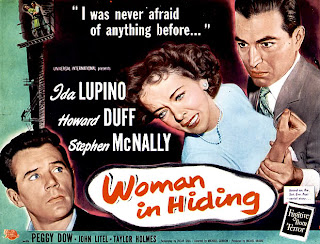 This poster is beyond great.

*LOADS OF SPOILERS. HUNDREDS OF THEM, THOUGH I DON'T GIVE AWAY ANYTHING ABOUT THE LAST 15 MINUTES*
Woman in Hiding (Michael Gordon, 1950) is an entertaining but heavily flawed crime melodrama. It mistakes repetition for relentlessness and has a plot that really doesn't stand up to scrutiny, but there are eye-catching performances from the iconic Ida Lupino and Peggy Dow, some nice stylistic touches and chase sequences and a pleasing mid-section that's lighter and brighter than the rest. London-born Lupino was a remarkable actress whose name became a by-word for eye-rolling intensity, thanks largely to her explosive supporting performance in They Drive by Night, the only film truly deserving of the title "trucker classic". She appeared in many of the best films of the '30s, '40s and '50s - being an assuredly classy presence in A movies like The Adventures of Sherlock Holmes (the pick of the Rathbone-Bruce pictures) and High Sierra and superb B films both comedic (The Lone Wolf Spy Hunt) and otherwise (Private Hell 36) - while embarking on a successful career as one of the business's few female directors.

Here she appears to depart this shadowy world in the opening sequence, as her car goes through a fence and over a cliff. As she tells us via voiceover, those folks blasting the river with an antique cannon are looking for her body. We get 20 minutes of flashback detailing her travails at the hands of stone cold psycho Stephen McNally - who totals her dad (Nancy Drew's father, John Litel), then cuts her brakes - before we catch up to the opening and find that she (wooh yeah!) totally escaped. Fleeing, her terrified bride ends up being pursued by a good-hearted, wrong-headed, love-struck drifter (Howard Duff), who thinks McNally's nice and Lupino's imagining things and should really go home. Their courtship, which has a slight whiff of It Happened One Night, is really nicely handled (and the chemistry is no illusion - Lupino and Duff were married soon afterwards), though the bizarre lurches in tone reach a head with the introduction of some drunk conventioneers, including Don Beddoe, who's billed as "Fat Salesman", which is just rude. There are two strong set-pieces. The best is the Hitchcock-esque stair chase, which is really cleverly directed, with great use of sound and shapes. The other is the more conventionally noirish train sequence, utilising such genre staples as the scary-face-in-the-mirror, the conk-on-the-head and the standing-with-your-back-to-the-wall-near-an-open-train-door-looking-frightened pose.

The film has in-built problems: a complete humourlessness in its first and final reels, lapses in logic that almost make you give up on it, and elements of dialogue and performance that seem terribly contrived. But it's still an interesting, watchable piece and it's a real treat to see Peggy Dow in one of her few film roles. Dow, who remains best-known as the entirely lovely Miss Kelly in Harvey, gave up her hugely promising film career when she got married the following year. Her turn here, flitting between drunken desperation, vulnerability and sensual villainy in the blink of an eye, is just yet more evidence of what a talent Hollywood lost when she resolved to devote herself to oil-drilling and charity work in Tulsa, Oklahoma. (2.5)

I also watched these two shorts on the Starlift disc: 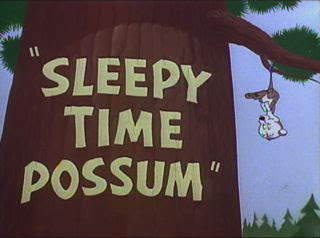 SHORT: Sleepy Time Possum (Robert McKimson, 1951) – Strange Merrie Melodies cartoon in which a mild-mannered possum dresses up as a dog and tries to beat up his child, to stop him napping all day. A few cute bits with the sleepy kid, who's surprisingly quick, but that’s all. Voices by Mel Blanc. (1.5) 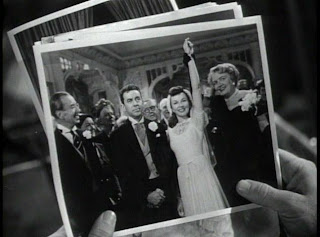 SHORT: So You Want to Be a Bachelor (Richard L. Bare, 1951) – An uncredited, trivial retelling of the old One Sunday Afternoon/The Strawberry Blonde story, this time done in one reel as part of the Joe McDoakes series. Seeing as we already have a classic version of this story, and another that's pretty good, the only way I can see anyone opting for this one is if they’re going to die in 10 minutes. (1.5)
Posted by Rick Burin at 19:42