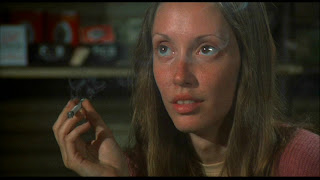 "Actually, Shelley, I'm afraid this blog is non-smoking. Please could you put that out?"

*SPOILERS*
Thieves Like Us (Robert Altman, 1974) - Robert Altman was a busy boy in the early '70s, gleefully destroying the mythology of cherished genres with the enthusiasm of a little kid with a toy hammer. When he made a Western (McCabe & Mrs. Miller), his hero was a bearded pimp wandering a snow-covered land of Leonard Cohen songs and near-inaudible dialogue. When he turned his hand to film noir (The Long Goodbye), it was to introduce a scruffy, shambling Philip Marlowe whose messy hair matched his messy mind - and who couldn't even con his cat into eating an inferior brand of food. Thieves Like Us, released the next year, was something of a departure: less doggedly contrarian, with its aspects of realism allied to a certain heightenedness in style and atmosphere that smelled like folklore-fashioning.

The film is an adaptation of a 1937 Edward Anderson novel, filmed previously in 1949 as They Live by Night, director Nicholas Ray's brilliant debut and one of the most vivid evocations of young love - and Depression-era desperation - ever put on film. While the first movie made excuses for its desperate protagonist (Farley Granger), here murderer Keith Carradine has no regrets (except that he's never pitched pro-ball) and no intention of leaving behind his life of crime with two older desperadoes, despite having found love. This is a tougher film to fall for, then, but an easy one to admire.

Beginning with a shot of chain-gang convicts rumbling past on the rails, Altman effortlessly conjures a world of poverty, dirt and hopeless aspiration, shoving bottles of Coke into every scene and soundtracking his film with almost ever-present radios, playing light entertainment shows, crime serials, news broadcasts and political speeches. Occasionally it's too heavy-handed (the Romeo and Juliet sex scene, with its repetitive refrain), but more often it's perfectly-judged. The film follows the trio from the aftermath of their prison escape to their bullet-riddled fate, contrasting their presentation in the press with the less exciting, but more intriguing reality. In the midst of all that, there's time for numerous superb vignettes (the '36th robbery' being the highlight) and a touching romance between Carradine and gas-station attendant's daughter Shelley Duvall.

For those who only know Duvall as the perpetually-screaming would-be-victim of a large portion of ham (Jack Nicholson) in Kubrick's The Shining - which I seem to be alone in thinking is actually quite a poor film - this should be something of an eye-opener. For the first seven years of her career, Duvall appeared only in the films of Altman, evincing a rare kind of magic in her rich and sensitive characterisations. She's wonderful again here: needy, adoring and appealing. Her defining moment is a scene where a lesser performer could have blown it all, as she shifts from scorned fury ("You lied. Liar!") to longing and a desire for affirmation, cradling Carradine's head as he sits motionless on the bed. Carradine himself has been lacklustre more often than he's been impressive, but he did some of his best work for Altman (most notably in the following year's Nashville) and is extremely effective in a role that suits him well. John Schuck and Bert Remsen also do strong work as his partners in crime, though the pick of the supporting cast is Louise Fletcher (One Flew Over's Nurse Ratched), excellent as a put-upon relation sheltering the titular thieves.

In many ways, Altman was the key American director of the period, the one who both created and seized upon the unique opportunities of the period, realising the zeitgeist and pioneering its most important innovations, like overlapping dialogue and labyrinthine, novelistic narratives. Co-scripting here, he nails the period and the significance of this story, while throwing in some left-field touches that you'd swear were Coen brothers originals, leaving much of the main action sequences off the screen, and showing the crooks drawing straws to see who drives the getaway car... then deciding that's not going to work. It's a completely different take on Anderson's novel to They Live by Night, but just as incisive, rewarding and memorable. (4) 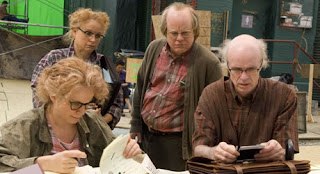 Synecdoche, New York (Charlie Kaufman, 2008) - So what's the purpose of existence? That's the jumping off point for Kaufman's vivid portrait of a theatre director's obsessive quest for love and truth-in-art; a film that's sprawling and meticulous, brilliant, maddening and desolate. Philip Seymour Hoffman is Caden Cotard, a gifted, complex, unhappy man who may be dying. Winning a "genius" grant from an arts board, he proceeds to mount a vast, unstaged, 17-year play about his own life, focusing on his relationships with an idolising actress (Michelle Williams), a cleaner as whom he himself poses (portrayed by an actress played by Dianne Wiest) and the love of his life (Samantha Morton), realised in the play by Emily Watson. Still with me? Oh well. Like the play-within-the-film, Synecdoche, New York is insightful, nightmarish, ambitious, often intelligent, sometimes very funny - though its jokes are largely confined to the opening half - and stuffed with ideas, acute observations and surreal touches. Like having Cotard's cute little daughter Olive become a sexually-aggressive tattooed lesbian nudie-booth dancer who speaks only in German. And having Hoffman claim - as an aside - that there are only 13 million people in the world. There are missteps, largely borne of a slight restlessness that wrenches the movie away from some of its more intriguing scenarios almost as soon as they've begun and moments of self-conscious oddity, but it's difficult to remember a film as bursting with imagination, frustration and human misery. And the acting is phenomenal. It's a shame that Watson is given relatively little to do - as I've said before, she's simply the best actress around - but Hoffman is faultless and Morton just irressistible, continuing to deliver on the remarkable promise she displayed in Sweet and Lowdown and Morvern Callar. At last directing one of his own scripts, Kaufman - the writer of Being John Malkovich, Adaptation, Human Nature and Eternal Sunshine of the Spotless Mind - has created something utterly unique. And really bloody miserable. (4), for its sheer boldness. 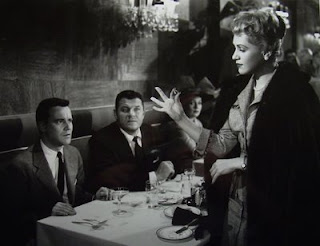 Phffft! (Mark Robson, 1954) - There was no-one quite like Judy Holliday and here she is again, the greatest screen comedienne of the 20th century, weaving pure gold out of whatever it is they put in front of her. In this case, it's a script from George Axelrod - the future writer of The Manchurian Candidate - offered to Columbia in place of what they really wanted, his stage hit The Seven Year Itch, then tied up due to its ongoing Broadway run. Holliday and Jack Lemmon, re-teamed after the glorious It Should Happen to You, play a divorced couple who engage in various ill-fated liaisons with amorous third parties (Jack Carson, Kim Novak), while recalling happier times and insisting they shouldn't get back together. It's nicely shot, fairly inventive and extremely well-played. Lemmon is very good value, showing just traces of the annoyingness that was to come (a wince here, a nervous giggle there), with the ever-underrated Carson in fine form and Novak showing top comic smarts in her bouncy, pouty, Monroe-esque supporting bit. It's Holliday's show, though. Her timing and delivery is just exquisite, especially in the mambo sequence, the sort of scene that's been done countless times elsewhere, but never with such spectacular results. (3.5)

Trivia note: The eponymous noise was gossip columnist Walter Winchell's shorthand for a couple splitting up. Winchell was one of the key cultural figures of '30s America - remaining in the public eye well into the '60s - and was fictionalised as the hero of numerous movies, including Blessed Event (for me, the greatest comedy of all time, where the character was played by Lee Tracy), Okay America! (starring Lew Ayres) and Is My Face Red? (Ricardo Cortez), before playing himself in Love and Hisses. 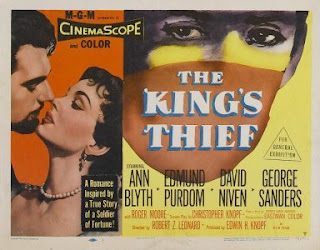 The King's Thief (Robert Z. Leonard, 1955) - This is sheer escapism, set during the reign of Charles II, as highwayman Edmund Purdom and noblewoman Ann Blyth join forces to bring down the King's trusted advisor, heinous, grasping David Niven. It's handsome - with expansive sets and rich Technicolor cinematography - fast-paced and full of ingenious little twists and turns, even if some key plot elements are introduced at too short notice and the MacGuffin of Niven's little black book is pretty juvenile. The big treat here is the performances: Niven charismatic and despicable playing the villain, Blyth sweet and deceptively powerful as the film's emotional centre and George Sanders fey but statesmanlike in an extended cameo as the monarch. (3.5) 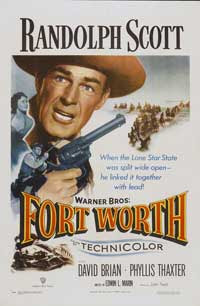 Fort Worth (Edwin L. Marin, 1951) - Constrained to the city, Randolph Scott seemed a severely limited actor, but send him out West and a strange thing happened: his delivery changed from stilted to craggily imposing; his manner from uncomfortable to unbeatable. The pick of his Westerns were the Ranown cycle, the unforgettable pictures he created with director Budd Boetticher, but most of his '50s genre entries are worth a look, as are the contemporaneous efforts of Joel McCrea and Audie Murphy. Fort Worth has above-average production values and an interesting story, centring on the coming-of-age of the titular town, while David Brian keeps you guessing as "Mr Fort Worth", who's either a public-spirited rogue or a total crook. The film's philosophical concerns are poorly handled, precisely because no classic Western ever faced down the idea that physical violence is the solution to all the world's ills, and the opening scenes are quite poor in terms of both dialogue and some unnecessarily nasty plotting, but it's still highly watchable, with some lively face-offs and a nice performance from Phyllis Thaxter (who went on to play Superman's adoptive mother in the Christopher Reeve series) as the love interest. (2.5)
Posted by Rick Burin at 20:41