I've been taking up a lot of your time lately, with my daily behemoths, so here's a lighter, briefer, more easily digestible sprint through my recent viewing. No, what's a mixed metaphor? 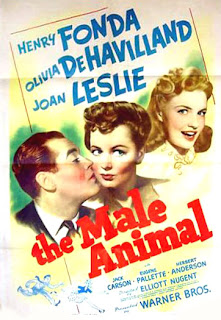 The Male Animal (Elliot Nugent, 1942) – Henry Fonda is a professor accused of radicalism, whose wife (Olivia de Havilland) may be about to desert him for all-American hunk of meat Jack Carson. This intelligent comedy, based on the play by Nugent and James Thurber, mixes farce, character comedy and social commentary, aided by a brilliant cast, with Fonda unquestionably the standout. It's also great fun to see the vanity-free Joan Leslie, fresh from Sergeant York, playing a knockabout supporting role as an ingénue with two boyfriends. She's as attractive as ever. (3.5) 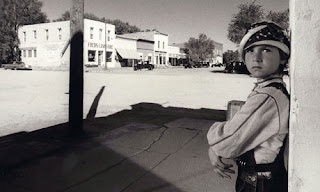 Paper Moon (Peter Bogdanovich, 1973) – Superb, exquisitely-shot comedy, set during the Depression, about a conman (Ryan O'Neal) who takes care of a precocious, uber-wily nine-year-old (his real-life daughter Tatum, who's absolutely wonderful) and finds she quickly becomes part of the business. Still about as much fun as you can have with Ryan O'Neal. (4) 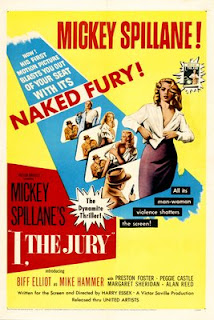 I, the Jury (Harry Essex, 1953) – I like everything about this movie: the title, the Christmas setting, the unrivalled atmosphere – as punchy, violent and relentless as film noir ever got – the performances (especially Biff Elliot as the thuggish Mike Hammer) and genre pioneer John Alton's sometimes spellbinding photography. Originally in 3D! (3.5) 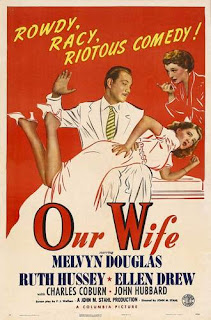 *SOME SPOILERS*
Our Wife (John M. Stahl, 1941) – Peculiar movie that begins as an affecting romantic comedy – a touch weightier than most of Melvyn Douglas's of this period and welcome for it – then turns into a drama about his new girlfriend Ruth Hussey trying to prove his ex-wife (naughty Ellen Drew) is faking paralysis to win him back. I know what you're thinking: yes, she does set the house on fire, though it's by accident. The acting's good, but the plotting goes a bit awry, as you might have guessed. Charles Coburn gets at least three of his lines wrong, the unprofessional old cove. (2.5) 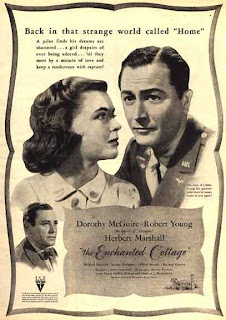 *MINOR SPOILERS*
The Enchanted Cottage (John Cromwell, 1945) – I recently made a list of the 100 greatest female performances of all-time. Dorothy McGuire appeared twice in the top 10, for A Tree Grows in Brooklyn and The Spiral Staircase, released the same year. This is the other film she made in 1945 and dang it to flippety heck (please excuse the profanity), if she isn't just as good here. The film is a magical romantic drama about her dowdy spinster (though you wouldn't really know it to look at her), finding love with flyer Robert Young in the magical cottage of the title, after he's disfigured in an accident. It's incredibly powerful and affecting and the performances are just amazing, particularly from McGuire (was there ever a more sensitive actress?) and Herbert Marshall, playing the lovers' confidant, a blind composer. The early scene where McGuire is turned down by a succession of soldiers at a canteen dance is just heartbreaking. (4) 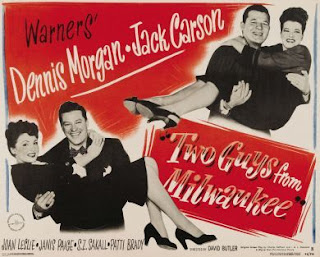 Two Guys from Milwaukee (David Butler, 1946) – I really like these old Jack Carson-Dennis Morgan comedies, full of (dis)agreeable banter, movie in-jokes and cameos, and directed with a fine comic touch by Butler, who had helmed the pick of the Road films (Morocco) for Hope and Crosby. Here, Carson's a taxi driver who introduces Balkan prince Morgan to the delights of American society, including Joan Leslie. I could watch her all day. And often do. The script was co-written by I. A. L. Diamond, who co-wrote many of Wilder's finest. (3.5) 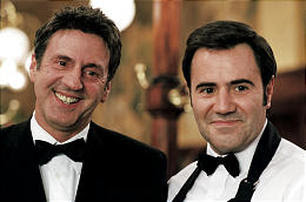 Après Vous (Pierre Salvadori, 2003) – This is a tremendously entertaining, frequently very funny comedy that builds on a pretty unpromising premise - a man saves a stranger from committing suicide and tries to help him get his life back on track - through inventive plotting, matter-of-fact characterisation and a wealth of great jokes. Daniel Auteuil shows an unexpected flair for being silly, at one point pretending to be a lobster. (3.5) 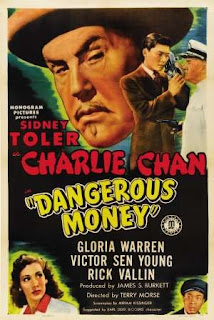 Dangerous Money (Terry O. Morse, 1946) - Sidney Toler's penultimate Chan at cheapo studio Monogram is uncharacteristically well-shot and relatively well-written, though sadly the wrap up - as in too many of these Poverty Row entries - doesn't make a whole lot of sense. Like the Fox entries Honolulu and Dead Men Tell, almost the whole thing takes place on a ship. Toler is reunited with his Number Two Son, Victor Sen Yung, for the first time since Castle in the Desert, even if half of Yung's dialogue is just him telling Willie Best to shut up. Dick Elliot does his usual "suspiciously avuncular Southerner" bit in support. (2)
Posted by Rick Burin at 11:01