Tracy and Hepburn do America - Reviews #36 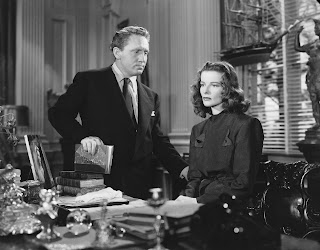 Keeper of the Flame (George Cukor, 1942) - National hero Robert Forrest is dead. As America mourns, idealistic hack Stephen O'Malley (Spencer Tracy) arrives at the Forrest mansion, promising to do right by the heroic statesman with a comprehensive biog. That sounds reasonable, so why is Forrest's white-clad widow (Katharine Hepburn) acting so strangely? The film starts off fantastically, the first 30 bristling with energy and intrigue as sparks fly between reporter Tracy - just back from Berlin - and old flame Audrey Christie. There's some super interplay between the leads as well, and Tracy spouts spare, world-weary wisdom as only he can. But then Kate starts whispering behind closed doors to press agent Richard Whorf and it all falls apart. The blame really lies with Donald Ogden Stewart's script, which slips from wit, originality and humanism to cliche and blandness, though Cukor (Hepburn's favourite director) doesn't help matters by signposting all his plot twists.

There's a good idea at the heart of this film, but it's lost in the muddled production. The effect is as if Tracy and Hepburn were offered four disparate projects and decided to film them all at once. Beginning with a sort of inspired cross between Citizen Kane (see #88) and His Girl Friday (see #100), we traipse through tedious gothic melodrama (the mid-section playing like a flabby Jane Eyre as the meeting with Forrest's mother just goes on and on and on), and wind up in a heavy-handed, unconvincing thriller, Hepburn frantically incinerating her late husband's papers. To my eyes, few films are "unintentionally hilarious", but there's a bit in the climax where Whorf bounces off the front of a car that's really badly handled and did elicit a slight chuckle. Considering the film's opening, I have to chalk up Keeper of the Flame as a major disappointment. Revel in the opening third, with its scintillating badinage and Percy Kilbride's hilarious supporting turn, but don't expect that momentum to last. By the final reels, there's just the performances to take solace in, as the screenplay loses the plot. Perhaps that's what Hepburn was chucking in the fire. (2.5)

For our review of Hepburn and Tracy in Adam's Rib, why not clicky here.
Posted by Rick Burin at 20:22