The making of Buster Keaton - Part One

Having received The Greatest Box-Set in the World (TM) from my girlfriend, I've embarked on a 32-film journey that is going to change my life for the better. I've seen all of Buster Keaton's 1920s films, but only a handful of those he made before, acting as sideman to Roscoe "Fatty" Arbuckle, the rotund slapstick merchant whose career would soon be destroyed by Hollywood's first major scandal.

So, in order to trace his journey from bit-part molasses victim to the greatest visual comedian the movies have ever seen, I'm watching Buster's early shorts in order, starting with: 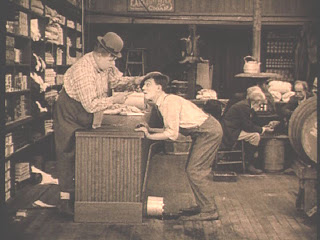 The Butcher Boy (Roscoe 'Fatty' Arbuckle, 1917) - Not Neil Jordan's transcendent, blackly fascinating 1997 coming-of-age film, but Buster's first appearance on celluloid. He gets his straw boater full of molasses and his foot stuck to the floor of a grocery store, before helping the villain try to kidnap Arbuckle's girl. And for fans of the Great Stone Face, there's a little glimpse of the heroics to come, as he clambers onto some high shop shelves, then casually flings a plate at someone, as well as the chance to see him laugh (it's just after the guy next to him gets a faceful of flour). The film as a whole is a bit inconsistent - with an over-reliance on footage of Arbuckle skipping about dressed as a girl - but not bad. (2.5)

Next-up, he said with unerring prescience: The Rough House.
Posted by Rick Burin at 08:14