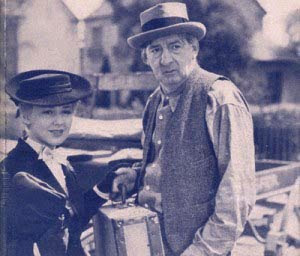 Anne of Windy Poplars (Jack Hively, 1940) - RKO's belated sequel to its 1934 success, Anne of Green Gables, is a very different film. That was enchanting Americana, slightly undone by budgetary constraints and pacing issues. This one's a well-mounted, stylishly-directed tale of small-town bigotry, with portions of gothicism, that benefits from its straightforward narrative and relatively short time-frame. Anne Shirley, who borrowed her screen name from her character in the first film, returns in the lead - a little more restrained, somewhat fuller of face - and nails the character once more. Her Anne arrives in a small town to find herself cast adrift by a wealthy, all-powerful clan of malicious gossips, headed up by Ethel Griffies. Luckily, she's got a cast of classic character actors on her side, including Henry Travers, Elizabeth Patterson and Slim Summerville. They really did assemble a quality ensemble for this one, even if some of the more timeless performers (Patterson) are neglected at the expense of some of the more annoying ones (Summerville). Anne's beau, Gilbert, is played by English-born Patric Knowles (a staple of '40s comedy-dramas), her next-door neighbour is the excellent Joan Carroll (later Meet Me in St. Louis' Agnes) and her most troublesome student is Marcia Mae Jones (of These Three and the Shirley Temple version of Heidi), while Clara Blandick and Alma Kruger are also on board, albeit with nothing to do.

Purists may be offended by the liberties taken with L. M. Montgomery's narrative - there's a different ending, while in the book Griffies' character is won over by Anne, rather than remaining pungently unrepentant - but it's highly entertaining and there are plenty of effective scenes. Some are touching, like Shirley and Collins' heart-to-hearts through a hole in the fence. And some are bloody terrifying, as Griffies morphs into a creepily friendly old dear to bat away Anne's heartfelt pleas for clemency. Perhaps the film didn't strictly need its melodramatic climax, but it's quite well-handled, particularly Travers' boat escape. Style-wise, it's not clear if RKO were getting in the swizzy equipment ahead of Orson Welles' magnum opus, Citizen Kane, but there are a couple of uncharacteristically swish camera moves here. One is the neat (if slightly fuzzy) crane shot as Anne walks towards Windy Poplars for the first time. The other is an Altman-esque tracking shot that adds immeasurably to the final scene, guiding us through the vivid tableaux of a small-town picnic, its dappling sunlight and rustic allure calling to mind Renoir's Partie de campagne. A memorable way to finish a very satisfying movie. (3) 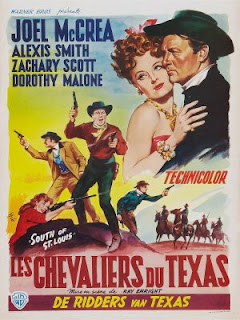 The Chevaliers of Texas? Now that I would watch.

South of St. Louis (Ray Enright, 1949) – Well, that was disappointing. A strong cast, a potentially intriguing premise and the usual nifty Warner trappings are powerless in the face of a cliched, incredibly confusing script. So who did what now? There's a lot of stuff about Civil War gun-running; that could have been interesting. And Mexico. And there's some kind of double-dealing, but I couldn't say exactly what. Why are those rival soldiers wandering about in supposedly secure areas? Where did those phony uniforms come from? Who the hell are those guys? Where's the script editor gone? Oh, you're just copying out bits of The Roaring Twenties now, are you? It's fun to see Victor Jory as a filthy, amoral pillager patterned about William Quantrill - he usually played suave, shaven villains - while lust interest Alexis Smith appears to be in a permanent state of arousal, but it's not enough. Not quite. (2)
Posted by Rick Burin at 08:14