Gromit, aliens and the hilarity of radiation poisoning - Reviews # 15 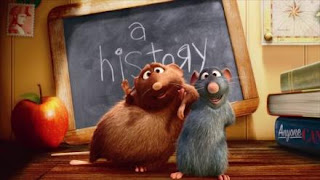 DTV SHORT: Your Friend the Rat (Jim Capobianco, 2007) - The Black Death, arf. Nuclear fallout, chortle. Yes, that's the appealing sense of humour flowing through this grossly disappointing Ratatouille spin-off, which largely neglects computer animation, and decent jokes, as it argues the rat's case. It does pick up at the end, with a fun song and some fitfully hilarious disclaimers, but it's not enough. (2) 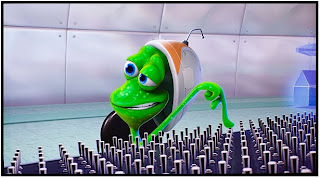 SHORT: Lifted (Gary Rydstrom, 2006) - An isolated farm. A sleeping man is lifted from his bed by a beam of electric blue light from a mammoth spaceship. He levitates towards the open window, and smacks his head on the wall. He moves back - and does it again. Cut to an apprehensive-looking alien twiddling buttons on a vast keypad, as his boss shakes his head and makes notes on a clipboard. That's the opening of this typically brilliant short from Pixar, which takes a simple premise and works wonders with it, displaying the anarchic sensibility and understated sentimentality that makes the studio's output so different from the saccharine, mugging, modern-day Disney*. From start to finish, it's just uproariously funny. (4)

*I know Disney now owns Pixar, but the point still stands. Pixar's internal autonomy continues to keep its terrific films distinct from the main Disney fare with its smugness and superficial emotionalism. 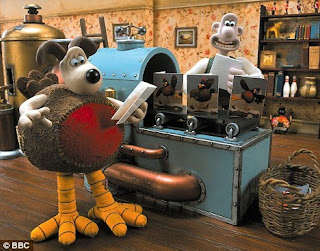 *SOME SPOILERS*
SHORTS: Cracking Contraptions (Loyd Price and Christopher Sadler, 2002) - This run of Wallace and Gromit shorts debuted on the Internet a good eight years back, though I caught them on BBC3 this year. Each film introduces one of Wallace's inventions, which wows you with its ingenuity, before going entirely, gloriously wrong. The films are staggeringly good, playing to the series' strengths - sight gags, slapstick and a nice message about the value of friendship - without the spoofering, poor celebrity voicework and cumbersome plotting that has hampered their more recent efforts. The sight of Gromit, dressed as a sheep, bouncing through the floor of amnesiac Wallace's room, as his owner sleepily counts his appearances is perhaps my favourite half-a-minute of Aardman ever. Fast, funny and fiercely inventive. (4)
Posted by Rick Burin at 22:16