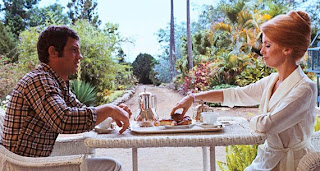 *SOME PRETTY SIZEABLE SPOILERS*
Since my most recent ventures into the French New Wave have concerned the work of Jean-Luc Godard, I was worried I might not be able to make sense of contemporary Francois Truffaut, with his coherent plots and properly-rounded characters. I attempted to navigate this problem by tackling one of his most maligned films, Mississippi Mermaid (Francois Truffaut, 1969), but darn me if it wasn't rather good. Jean-Paul Belmondo is a lovelorn factory-owner with big sideburns and an apparent predilection for carrying a mounted camera in the back of his car. Incidentally, so have all the other characters. Oh I see, it's Truffaut's new toy. Catherine Deneuve, as strawberry blonde as she ever got, is Jean-Paul's scribe of a bride - a pouty penpal who looks a bit different to the one he thought he was wooing. Some half an hour in she scoots with his fortune, and the rest of the film skips from revenge fantasy to romantic drama and crime thriller, the whole thing climaxing with a snow-bound reconciliation that's both touching and doggedly unsentimental. Belmondo, the most handsome ugly man (and vice-versa) I've ever seen is typically brusque and brilliant, and there's a real charge in his relationship with Deneuve. The film isn't always coherent, or clever, or even that well-conceived, but there's an agreeable conviction in its presentation of a couple who love - and need - each other far more than they can tolerate one another's foibles, and Truffaut finds time for some attractive self-contained vignettes. The sequence in which Deneuve records a love message for her beau is particularly incisive, with a smart, ironic punchline. I can see why the film has struggled to find an audience, since its genre-hopping is unlikely to satiate either crime fans or romantics, but it's an unusual, engrossing and rewarding film. Albeit with too much in-car camera. (3)
Posted by Rick Burin at 22:17