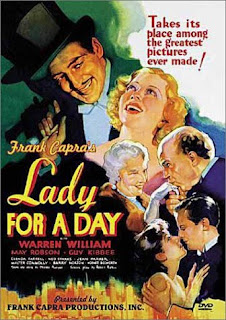 Please note: despite appearances, Warren William is not evil in this film.

Lady for a Day (Frank Capra, 1933) was, as his son proudly points out in his DVD intro, the first Capra film to be nominated for an Oscar. It was up for four gongs, though ultimately won none. Don't feel too sorry for the beetle-browed sentimentalist, though, his follow-up - It Happened One Night - became the first film to take home all five major Academy Awards: picture, director, actor, actress and screenplay.

As a film based on a Damon Runyon story, Madame La Gimp, directed by Capra and scripted by his regular collaborator Robert Riskin, Lady for a Day is pretty much what you'd expect. It takes place in a world of likeable hoods, good-hearted ordinary folk and overly suspicious cops. It's frequently very funny - and it's deeply sentimental. May Robson is Apple Annie, a downtrodden old woman who lives in a barely-lit flop house, drinks too much and sells fruit out of a basket to survive. The only thing on this good earth she cares about is her daughter (Jean Parker), who was sent to a convent school years before and is now living in Spain. To shield the girl from her plight (she says a couple of times that the shock would kill her, though the shame - you imagine - would mostly be on Annie's part), she steals stationery from a swanky hotel and pens letters boasting of her exploits in high society. When the girl writes to say she's returning to America with a fiancee and a prospective father-in-law (Walter Connolly, unusually restrained as a Spanish count with a generic foreign accent), it's left to good-hearted gangster Warren William and his ragtag band of affable goons to turn her into a lady.

The plotting is extremely deft and well-paced and Riskin's script provides plenty of memorable dialogue. He could overwrite and reject brevity for speechifying, but at his best he was among the finest screenwriters in Hollywood. Here he's at his best. There's a lovely moment when Annie appears at the dockside, looking every inch the society lady, and one of her friends says: "I remember when she looked like that all the time." It's such a simple line, but so stunningly effective. Later on, there's a wonderful exchange between William and his moll, Glenda Farrell. "I love you for what you're doing," she tells him. "Oh shut up", says William. Near the close, as plot threads are being tied up, we cut from one car to the next. For a second you think Riskin's completely lost it, with a series of brief, nondescript exchanges in which the authorities resolve not to prosecute William and the governor and the mayor make up. Then comes the sting. "I'm sorry I've been so harsh on your guys, I know you're doing your best," the irascible police chief tells his men, as they grin sheepishly. Riskin's scripting is so skilful that potential pitfalls - a dearth of daytime scenes between Annie and her daughter, little screentime for either of its romantic couples - are effortlessly avoided.

There's a lot to enjoy in the acting. William, perhaps best known today for his role in the delightful mystery-comedy series The Lone Wolf, makes the most of what is essentially a supporting role. Farrell, fast becoming one of my favourite performers, is also a joy, sparking brilliantly with the eternally deadpan Ned Sparks (who resembles an old Buster Keaton). And Robson, nominated as Best Actress, is simply superb. She's utterly believable as the tragic alcoholic venturing, terrified, into high society. The first 15 minutes, in which we see her peddling, lying by letter, then growing increasingly desperate as her daughter's latest message goes missing, are an acting masterclass. Capra fills the cast with familiar faces, each given a couple of scenes to absolutely nail their character. As well as the sardonic Sparks, there's Guy Kibbee playing a billiards shark with the gift of the gab, Nat Pendleton as a very supportive henchman and Halliwell Hobbes, doing a Blore-ish bit as Robson's adopted butler.

Capra's handling is typically assured: perfectly balancing the different story elements and drawing the viewer in via some expressive direction. The backwards tracking shot following Robson as she goes off to ruin her life in the living room is really effective, and the lush romanticism of his soft-focus close-ups on the lovey-dovey couple recall Mitchell Leisen's soppier moments. I'm a big fan of Capra, and Lady for a Day is one of his best - a marvellously-acted tearjerker that allows plenty of room for character comedy. It was remade by Capra himself as A Pocketful of Miracles, incidentally, then later by Jackie Chan, as Miracles. (4)
Posted by Rick Burin at 14:39