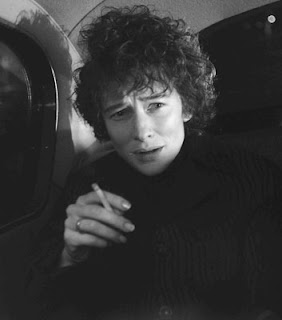 *IF YOU DON'T LIKE RUDE WORDS, SKIP THIS ONE*
I’m Not There (Todd Haynes, 2007) – “What’s this shit?” as Greil Marcus memorably enquired of Bob Dylan’s 1970 album, Self Portrait. What indeed? The shape-shifting Dylan is split into six different personas, including a flirtatious, feline ball of wiry hair with no emotions (Cate Blanchett), an 11-year-old black troubadour called Woody Guthrie (Marcus Carl Franklin), and a poetic, talking head Bob (Pingu from Nathan Barley), being quizzed by an unseen interrogator. They’re all pretty good while a section with a bland Richard Gere – as the old, incognito Billy the Kid – works nicely (especially his ride into town to the wondrous strains of The Man in the Long Black Coat), but Keith Ledger is wasted in a boring story strand and Christian Batman is just rubbish, mistaking "leaning forward" for "being shy". Haynes' film is based on an intriguing idea and the results are generally entertaining, but it's nevertheless riddled with pretension and emotionally unsatisfying, especially when most of this story has been told so powerfully already in Scorsese’s coruscating, excoriating No Direction Home. (2.5) 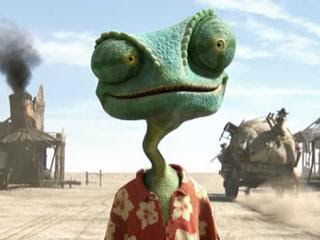 Rango (Gore Verbinski, 2011) – OK animated feature about a chameleon posing as a hero in the town of Dirt, which works in extended spoofs of spaghetti Westerns and Chinatown, along with some excellent slapstick and a peculiar predilection for jokes about adult health complaints. Johnny Depp’s voicework is a bit strained and the story is bitty in the extreme, but there are effective stretches. Kung Fu Panda 2 was aces, but with this, Tangled and Cars 2, it hasn’t been a great year for animation, all told. (2.5) 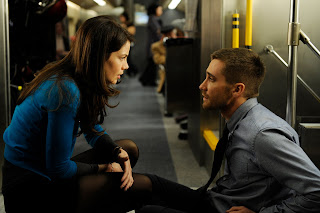 *SPOILERS*
Source Code (Duncan Jones, 2011) – Supremely entertaining sci-fi movie that cuts Groundhog Day down to eight minutes and then shoves it into thriller territory. Jake Gyllenhaal is the disorientated war vet reliving the final moments of a commuter’s life in a bid to thwart a terrorist atrocity – whilst falling in love with the doomed acquaintance opposite. There may be plot holes and inconsistencies, while a saccharine pay-off alienated many, but this is so slick, imaginative and well-executed that I didn’t really care. With this, Never Let Me Go and The Adjustment Bureau, it’s been a good year for intelligent sci-fi with a bit of heart. (3.5) 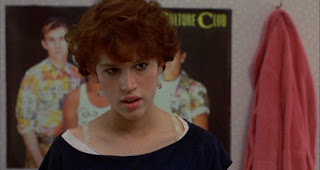 Sixteen Candles (John Hughes, 1984) - A sweet story about 16-year-old Molly Ringwald's disastrous birthday, her encounter with a horny geek and her mad crush on a soulful, chiselled jock emerges, shaken, from beneath a mountain of cartoonish gags, materialist moans and objectionable epithets ("fag", "retard", "spaz") in this textbook Hughes comedy-drama. The overwhelming impression is that he didn't trust the central story to hold interest for 100 minutes, or didn't know how to adequately sustain it, so just started furiously padding. Ringwald and Anthony Michael Hall - as the nerd with a litany of fictional sexual conquests - are both very good in their realistic, star-making parts, and Justin Henry is funny as Ringwald's acerbic little brother, but the ratio of great scenes to disposable ones is about 50:50 (special mention for the terrible mafia subplot) and every moment Ringwald is off screen, it really suffers.

The film has attracted criticism for its supposedly racist Chinese character, but he's kind of a hero and - even taking into account the bit where he leaps out of a tree in traditional dress, shouting "Banzai!", which is hilarious - he's no more of a stereotype than the other characters, with the humour arising from his exuberant idiocy rather than his ethnic background. I should also mention for all John Cusack afficionados (and who could claim to be anything else and still expect to be taken seriously), that he has a fun part as one of Hall's even geekier pals. While Hughes' breakthrough film is maddeningly unfocused, at its heart is something really nice and tender: anchored by a new kind of screen teen. By the '90s and early-'00s, such adolescent angst would be boiled down to its emotional core in heartstopping shows and films like My So-Called Life and Ghost World. Here, as in so many "me decade" films, the universal themes are somewhat obscured by consumerist griping, gratuitous tits and misguided frat house-ry. (3) 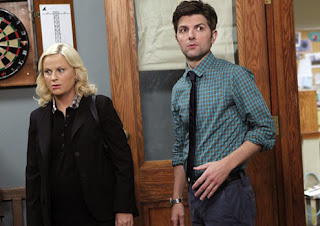 *MILD SPOILERS*
Parks and Rec: Season 3 (2011) - What a wonderful programme this is. Warm, funny and - when necessary - razor-sharp, with an irresistible ensemble. It's great to see Adam Scott slotting into the cast so well: he gets the biggest laugh of the series with his spectacular meltdown on Ya' Heard? With Perd. (4)

See also: That review was rubbish, but don't let that put you off my review of Season 2.
Posted by Rick Burin at 20:21