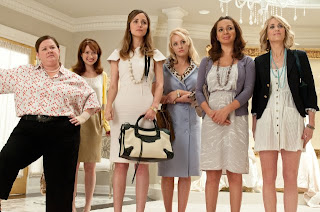 CINEMA: Bridesmaids (Paul Feig, 2011) is a fresh, funny and insightful look at middle-aged malaise, dressed up as a knockabout comedy. When unlucky-in-love Annie (Kristen Wiig, who co-scripted) finds her childhood pal Lillian (Maya Rudolph) is getting married, she’s delighted - if a little envious. But as she becomes engaged in a running war with Lillian’s infuriatingly perfect new best friend (Rose Byrne), Annie’s life proceeds to fall apart, with not even the attentions of thoughtful traffic cop Chris O’Dowd helping her to see sense. Like many comedies from the Judd Apatow stable - including Knocked Up, The 40-Year-Old Virgin and Superbad - Bridesmaids is a little unfocused and sentimental. But it’s also agreeably honest and very entertaining, with some spectacularly funny scenes. A gross-out sequence in a bridal shop toilets had the packed screening room shaking with laughter, though most of the highlights belong to Wiig: a meltdown on a plane, a row with a gobby teenager and a hysterical parade of car-related silliness. This is a terrific showcase for the actress, who handles the dramatic material well, spits out some cracking one-liners and displays a tremendous flair for visual comedy; the appealing centre of a very likeable film. (3) 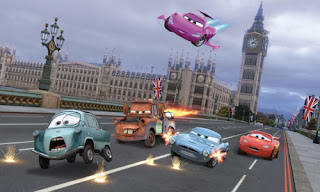 CINEMA: Cars 2 3D (John Lasseter and Brad Lewis, 2011) - Pixar's latest is good fun, but conspicuously lacking the magic of their finest fare. A follow-up to the folksy-but-flashy 2005 film - the weakest of the studios’ 11 features, but a merchandising goldmine - this sequel is an international spy caper that throws rusty tow truck Mater (voiced amusingly by Larry the Cable Guy) centre-stage. It’s zippy, quite inventive and boasts some vivid visuals, including intoxicating recreations of Paris and the Italian Riviera. Michael Caine is a nice addition to the cast as a secret agent with a pencil moustache and an array of gadgets, John Turturro is a riot voicing on-track nemesis Francesco Bernoulli and there are bravura passages, including a super opening set-piece. But after that stunning run of WALL-E, Up and Toy Story 3, the film’s lack of an emotional punch is obvious and its moral of friendship and staying true to oneself appears too heavyhanded and mechanical. Perhaps the peculiar universe, populated only by vehicles, makes it hard to really engage. Improbably, DreamWorks’ newest offering - the superlative Kung Fu Panda 2 - leaves Pixar’s trailing in the dust. (2.5) 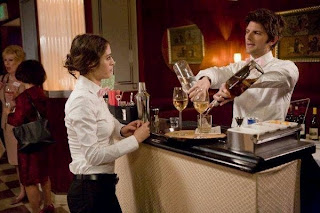 TV: Party Down (Season 1, 2009) is an incredibly funny comedy from those brilliant minds behind Veronica Mars, about a catering firm made up of frustrated actors who take on a series of diverse assignments, only for their personal lives to rather get in the way. It's inspired farce in the Steven Moffat vein - each episode building to an uproarious, often unexpected climax - shot in a handheld, faux-realistic style and blessed by Ken Marino's wonderful tragi-comic performance as team leader Ron and that scintillating Adam Scott-Lizzy Caplan chemistry. Mars fans will enjoy the host of guest appearances, including a naked Keith dive-bombing into a swimming pool, Logan Ecchols as a young conservative politico and Veronica herself playing a hard-ass boss from rival company Valhalla. Her "thank you" to Scott in that final episode is as lovely a piece of acting as you'll see all year. This whole series is just note-perfect, right down to its non-catchphrase: "Are we having fun yet?" (4)
----------------------------------------------------------------------------------
The reviews of Bridesmaids and Cars 2 3D were written by Rick Burin and appeared on Page 30 of the Harrogate Advertiser, July 29, 2011.
Posted by Rick Burin at 08:42