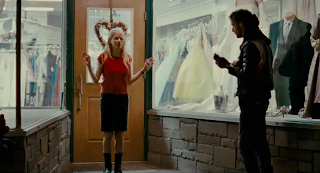 *SPOILERS*
Blue Valentine (Derek Cianfrance, 2010) - Intense, insightful, semi-improvised indie about the death of a relationship, starring perhaps the two best young actors in the world: Ryan Gosling and Michelle Williams. He's a former removal man and ambition vacuum who drinks too much and twists around everything she says. She's a put-upon, busy nurse who thwarts his attempts at physical reconciliation and allows the family dog to get run over. The film doesn't make judgements about these flawed, very real characters: it just throws their story onto the screen and forces you to watch as something utterly beautiful disintegrates, until all that remains is malice, unhappiness and desperation. There are fragments of warmth and love, and even a couple of very Gosling-ish jokes ("That's a funny name"), but the overall effect is like being whacked in the face. One of the best I've seen this year. (4)

*SPOILERS*
The Beat That My Heart Skipped (Jacques Audiard, 2005) – Audiard, Romain Duris is in trouble in this enigmatic collision of character study, thriller and piano concert. Did you get that? It was like "oh dear”. This star-making vehicle for one of Europe's most interesting, versatile, quiveringly-intense actors chronicles the travails of a low-level gangster and wannabe concert pianist negotiating the shadow of his father, who used to be a somebody in the Parisian underworld. It's a genuinely offbeat film: a collection of rough scenes in which Duris argues with his pops, sulks and rages at his fingers, boffs his associate's wife and later tries to beat someone to death with a briefcase. It's also largely brilliant, lit by Duris' shambling, megawatt persona and full of brilliantly-observed passages ruminating on such interesting subjects as family, honour and violence. It is a remake of the '70s American film, Fingers. I'm sick and tired of the French remaking American films, just because their audiences are too lowbrow to watch anything with subtitles. As observed recently by some otherwise insufferable bore on Radio 4, it's also an interesting companion piece to the recent Drive. (3.5) 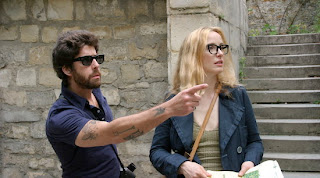 2 Days in Paris (Julie Delpy, 2007) - Very entertaining portrait of a Franco-American couple (Julie Delpy and Adam Goldberg) who spar, bicker, quibble and sporadically make up while spending two peculiar days in the City of Light. Revealing, intelligent and directed with a truly original eye, meaning that you can forgive some false steps and a feeling - which soon vanishes - that you've already seen this, and it was called Before Sunset. Delpy and Goldberg are both superb. (3.5) 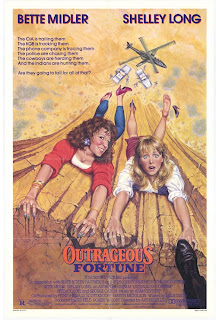 *SOME SPOILERS*
Outrageous Fortune (Arthur Hiller, 1987) is a very daft, very '80s but kind of enjoyable buddy movie starring Bette Midler and Diane off of Cheers. They're the chalk-and-cheese New Yorkers who – like Team America's Gary Johnson – have to use their acting powers to save the day, after two-timing boyfriend (Peter Coyote) turns out to be a Russian mole. This action comedy is a bit predictable – not dissimilar to Hiller's The In-Laws, which is much better – but for all its cheesiness and implausibility (why do they keep running away once they've knocked a lone bad guy to the ground?), I got quite into it. George Carlin turns up near the end as a faux-Native American tracker, if that's of interest, and there's also an appearance from Altman regular John Schuck. When he was born, I bet the doctor took one look at his face, turned to his parents and said: "Congratulations - it's a character actor!"(2.5) 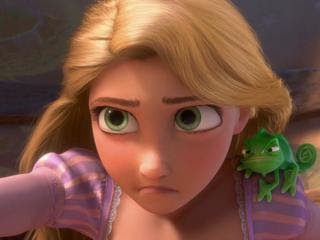 Tangled (Nathan Greno and Byron Howard, 2010) – A princess with magic hair (Mandy Moore, whose voicework is terrible) is swiped from her cradle by a manipulative old bag and kept in a dock-off tower, but dreams of one day escaping. Then into her closeted universe (and ultimately her closet) comes cocksure thief Flynn Rider (Zachary Levi). Disney's spin on the Rapunzel legend has its moments of excitement and slapstick levity – not least the I've Got a Dream set-piece, in which a barroom of thugs reveal a more arty side – and an agreeably sly, passive-aggressive baddie. But it's let down by erratic computer animation, the mannered, stagey butchering of a pleasant song score and a second half in which the extremely entertaining comic relief – an expressive, Gromit-esque chameleon – largely disappears. But I suppose I should have expected that from a chameleon. As in so many of its lesser films, Disney applies a thick layer of hideously mawkish, sanctimonious, patronising sentiment to any sequence it possibly can. (2.5)

... and a couple of Judd Apatow films I'd missed: 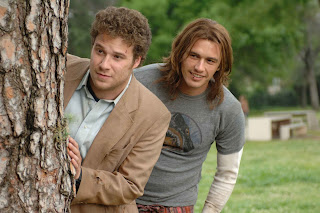 Pineapple Express (David Gordon Green, 2008) - Process server Seth Rogen witnesses a murder and is forced to go on the run with his weed dealer (James Franco) in this paradoxically enthusiastic stoner comedy. Most stoner comedies aren't funny unless you're, well, on drugs (French Connection II was a particularly poor effort), but this one's a slight cut above, thanks to an appealing performance from Franco as the dazed dealer and a typically amusing one from Rogen - the pair reuniting after Freaks and Geeks, also produced by Judd Apatow. It's very minor, there aren't enough good jokes and the shift into action at the climax doesn't work, but it's kind of sweet in its muddled way and the leads make a nice pair. (2.5) 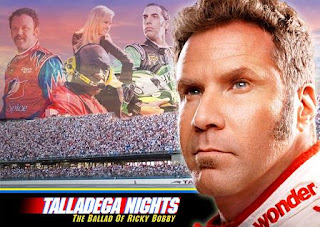 Talladega Nights: The Legend of Ricky Bobby (Adam McKay, 2006) - Unpleasant, self-indulgent but sometimes funny Will Ferrell vehicle, in which the star's insufferable speed freak takes stock car racing by storm, before crashing out in a ball of invisible fire (it'll make sense if you watch it) - only to rise again. It's directed by regular Ferrell collaborator McKay, but the improv approach that worked sporadically on Anchorman largely fails them here, as it would with Step Brothers. For every genuinely great line ("So when you say psychosomatic, you mean, like he could start a fire with his thoughts?") there are a half-dozen that just don't work, and the supporting cast of foul-mouthed kids, a grasping wife, a drug-dealing absent father and a neglected pensioner are more upsetting than funny. Ferrell readjusting to life in the fast lane by driving at 26mph made me laugh, and having him evade trackside flunkies by running in circles wearing only his pants is always going to work, but the film is ultimately too cold and cruel to engender any goodwill, which is what's needed when the material is as spotty as this. On the plus side, McKay and Ferrell's fourth collaboration, the cop comedy The Other Guys, is an unheralded classic - the improvisation augmenting rather than replacing a strong narrative and proper characters. "Gater needs his gat." (2) 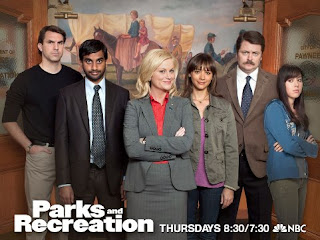 *SPOILERS*
TV: Parks and Recreation: Season 2 (2009-10) - As anyone will tell you, this second season is a massive step up from the first: think the gulf between Tom Waits' first two records, or Buster Keaton's Three Ages and Our Hospitality. This time around the characters feel real, their low-level quandaries important, whether that means romantic entanglements, some misguided plan to sell unhealthy health bars at the city's parks or dealing with the fallout from marrying two gay penguins. The nominal lead is Amy Poehler - playing eternally positive workaholic Leslie Knope - while Aziz Ansari's desperate, perma-grinning Tom Haverford has garnered most of the critical plaudits, but it's three other members of the ensemble that really make this sublime, satirical series fly: lazy libertarian boss Nick Offerman, pleasant, witless shoeshiner Chris Pratt and sarcastic, deadpan intern Aubrey Plaza. It's just a joy. (4) 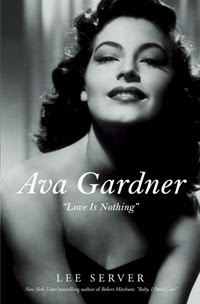 BOOK: Ava Gardner: Love Is Nothing by Lee Server - Server can be a superb biographer, one of the elite crowd who are both diligent researchers and excellent writers (ex-tabloid hack Howard Sounes may have unearthed Dylan's financial records and his second wife, but I still have nightmares about the songwriter's lyrics being "like magic birds that fly into the ear of the listener"). In 2001, he published the definite Bob Mitchum tome, Baby I Don't Care, a fascinating story and brilliant character study told in an awesome prose style that aped Mitchum's own hip, jive-talkin' persona, full of the "hell"s, "man"s and "baby"s that littered the actor's vernacular. This follow-up, which curiously omits Gardner's supposed fondness for "golden showers" - mentioned in the Mitchum book - is a somewhat less compelling affair due to its often dislikeable heroine, events that seem to repeat themselves on an endless cycle and muted stylistic leanings that can probably be filed under "Diet Faulkner". It's still zippy and entertaining, with a particularly strong mid-section (from Gardner's arrival in Hollywood to her time filming Bhowani Junction) and numerous memorable anecdotes involving such supporting cast members as Frank Sinatra, Ernest Hemingway and Luis Miguel Dominguín - the best bullfighter in Spain. (3)
Posted by Rick Burin at 20:37