... in which I shine a big fat light on films, scenes and movie folks deserving of greater recognition, with the help of words and videos. Nine at a time. I'm not sure why it's nine. This first instalment features backflipping, the Depression and a couple of policemen trying to decide who would win in a fight between a tuna and a lion.

Why not tell me your own below? Oh go on, it'll be fun. 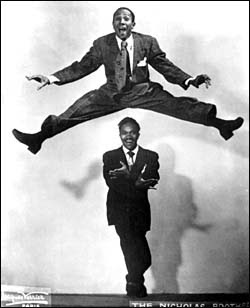 1. The Nicholas Brothers
You know Fred Astaire? That guy who was the finest hoofer of all time? He thought the Nicholas Brothers' Jumpin' Jive routine in Stormy Weather was the greatest dance number ever filmed - and who am I to disagree? (Well, I'm Rick, and I think Fred was being modest. Let's Face the Music and Dance is the best.) This astonishingly athletic duo - real-life brothers Fayard and Nicholas - debuted in early-30s shorts, when Harold was just 11, then made a name for themselves through extraordinary routines that typically began with some rhythmic shuffling, then built exponentially, until by the end they were skipping with handkerchiefs, leaping over each other's heads while doing the splits, or backflipping. Fox, who held their contract in the early-'40s never incorporated the pair into the plots of their films, meaning they could snip the stand-alone scenes from musicals when they played in racist areas of the South. Yes, you read that right. If you've got a few minutes spare some time this week, you should really check out these numbers - three of their best - as they're just about the most amazing thing ever to happen on a cinema screen.

Things for you to watch and enjoy:
Chattanooga Choo Choo (also featuring Dorothy Dandridge), from Sun Valley Serenade
Down Argentine Way from Down Argentine Way
Jumpin' Jive from Stormy Weather.
Be a Clown from The Pirate. If you recognise the tune, it was purloined - uncredited, I believe - for the Make 'em Laugh number in Singin' in the Rain.

2. Frank McHugh
"Haaaaaerh... haaaaerh... haaaaerh." The best laugh in the movies (referred to by fans as the "one, two, three") belonged to the best character comic of the Golden Age - though McHugh did star in a couple of features: He Couldn't Say No, opposite an improbably-smitten Jane Wyman (they generally occupied different strata in the star stakes), and Three Men on a Horse. McHugh, much admired by contemporary and friend James Cagney, could play it straight as well as most - check out his moving performance in the teary One-Way Passage - but it was as an affable, often confused comic foil that he excelled. Who else could have kept up with William Powell's tour-de-force in I Love You Again? McHugh did - and perhaps even surpassed him - with that drunken phone call to Edmund Lowe. And he's just bloody amazing leading a superb ensemble in Three Men on a Horse. In fact, you could argue that the three funniest comedies of the '30s and '40s all feature McHugh: that, I Love You Again and Blessed Event. 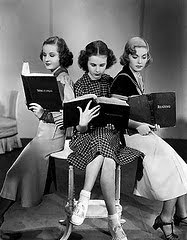 3. Three Smart Girls (Henry Koster, 1936)
The pinnacle of Deanna Durbin's career: a blissful mix of comedy, romance and lovely music. Canadian child star Durbin - an ordinary kid with an extraordinary operatic voice - was a simply terrific performer and she's in her element here: powering a sentimental, wonderfully entertaining movie that's a bit like The Parent Trap, but with songs instead of twins. Though he sometimes claimed otherwise for propaganda purposes, Durbin's breakthrough film, One Hundred Men and a Girl, was Churchill's favourite movie. Both are available as part of various box-sets, or on their own.

For your delectation:
The trailer. 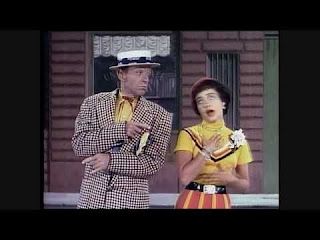 4. How Could You Believe Me When I Said I Love You, When You Know I've Been A Liar All My Life (from Royal Wedding)
The MGM number with the longest title of all, and one of my favourites. Hilarious, invigorating and exhilarating, especially when the beat speeds up and Fred starts striding around the stage, being all awesome. It's from Royal Wedding, which has four or five of the greatest musical interludes of all time, but devotes too much of its running time to Winston Churchill's daughter Sarah (Fred's worst leading lady), rather than the excellent Jane Powell.

Because I am nice:
The full routine in all of its considerable glory. 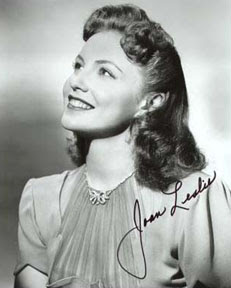 5. Joan Leslie
The most purely likeable actress ever to grace the screen - a fine actor, brilliant reactor, top dancer, great singer and master of the cartoonish expression later popularised by Debbie Reynolds. She starred with Gary Cooper, Cagney and Astaire, and even played herself - as a romantic lead - in wartime flagwaver Hollywood Canteen.

Now see her in action:
Joan performing A Lot in Common with You with Fred in The Sky's the Limit. 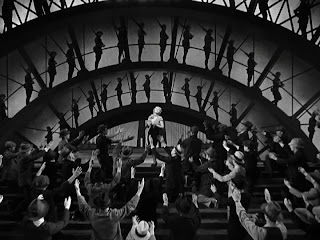 6. Remember My Forgotten Man (from Gold Diggers of 1933)
The production number to end them all: a jaw-dropping crystallisation of Depression-era America in which the myriad ills and marauding malaises afflicting the Land of the Free are paraded across the screen for seven whole minutes. Crippled soldiers sold out by their nation, gaunt, starving widows and bereaved old women take the place of chorus girls, before the massed ranks of the proletariat march relentlessly towards the camera, like something out of a Communist propaganda film. Astonishingly bold and confrontational, it could only have been made by one American studio: Warner Bros, where writers and directors injected searing social comment into the most innocuous-looking entertainments - in this case, a Dick Powell musical. Kudos too to musical director Busby Berkeley for scoring a key passage with a bluesy vocal by a black singer, Etta Moten. Remember My Forgotten Man is remarkably powerful, deeply moving and - aside from The Grapes of Wrath, a remarkable translation of Steinbeck's book crafted by John Ford and noted union-basher Daryl F. Zanuck in 1940 - remains the most striking, outrageously left-wing bit of film ever to emerge from mainstream Hollywood.

See it here:
And be astounded. 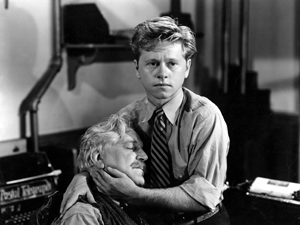 7. Mickey Rooney really acting
He's much maligned, our Mickey, and sometimes with good cause. There's that, err, questionable performance in Breakfast at Tiffany's ("Aaaaaaaaaaaaaaaaaah, Miss Gorightery!"), lacklustre turns in films like Pulp and a tendency towards absurd caricature in pictures that I nevertheless delight in: Boys Town, the Andy Hardy series and those other musicals with Judy Garland that helped make him a star, the pick of them being Girl Crazy. There's a lot more to Rooney, though, namely the dramatic chops that saw him described by Tennessee Williams as "the greatest actor of all time". When he was encouraged - perhaps even forced - to dial it down, Rooney displayed a simple style, emotions never far from the surface, that was devastatingly effective. In The Human Comedy he plays an adolescent forced to grow up ahead of time, as the ravages of work take their toll on his home town. In National Velvet, he's unforgettable as the gifted, mysterious, duplicitous horse trainer fighting his demons as he primes a gelding for the biggest race of its life. They're two of the most affecting, revelatory performances in cinema history. A few impressive roles followed, Rooney wrestling memorably with the fictionalised difficulties of Lorenz Hart in the musical biopic Words and Music - which couldn't mention that Hart's main problems related to being gay - but he seemed to lack a handle on exactly what his strengths were, overplaying terribly given the merest whiff of a chance. It'll probably take him shuffling off this mortal coil to get the credit he's always deserved, but you can beat the rush by checking out these twin peaks of screen acting, in which the biggest box-office earner of 1939, 1940 and 1941 briefly turned into the best actor in America.

Watch this:
Rooney's Homer delivers a telegram to the mother of a soldier in The Human Comedy.

8. Tuna vs Lion (from The Other Guys)
For a change of pace, here's one of my favourite scenes from The Other Guys, among the funniest - and most underrated - comedies of the past few years. Will Ferrell is an unsmiling, officious cop whose commitment to keeping his job desk-bound raises the ire of his partner, the perpetually furious Mark Wahlberg.

Watch it here:
Tuna vs Lion. 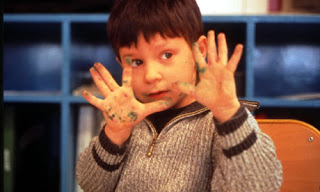 9. Jojo (from Etre at avoir)
Here's perhaps the cutest movie character of all-time - and he's real. Jojo is the undisputed star of the 2002 documentary Etre et avoir, the simple story of a small primary school in rural France. He can't wash his hands properly, he can't work a photocopier, but he has just seen a wasp. Awwwwwwwww.

See this:
Jojo has trouble getting his hands entirely clean.
Posted by Rick Burin at 20:41