Him and Orson Welles - Reviews #43

By his 26th birthday, Orson Welles had conquered the worlds of theatre, radio and film. I am 26 and still eat cereal for my tea. That is why no-one makes films about me.

Me and Orson Welles (Richard Linklater, 2008) 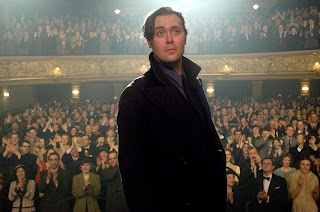 It's little wonder that Awesome Orson, that mercurial, self-destructive titan continues to excite and energise independent moviemakers like Tim Robbins (who dealt with Welles in the exceptional Cradle Will Rock) and Richard Linklater. Fiercely individualistic at a time of rigorous studio control, Welles was cut down by jealous rivals, blinkered bean counters and a virulent strain of egomania that prevented him playing the Hollywood game. Like Robbins, who charted the remarkable story of Welles' 1937 musical of a similar name, Linklater focuses on the great man's theatrical work - in this case the update of Julius Caesar that transplanted Shakespeare's work to Fascist Italy and proved the making of its director.

When a new project dealing with the Welles legend emerges, the first thing you want to know is: 'Who's playing Orson?' Who can hope to inhabit the character, with those instantly recognisable mannerisms, the peculiar speech patterns, that snub nose, that booming voice? At least 31 actors have taken on the challenge in TV and film, including Angus Macfadyen in Cradle Will Rock, Jean Guerin in Heavenly Creatures and Vincent D'Onofrio (dubbed by Maurice LaMarche) in Tim Burton's Ed Wood. Here it's RSC alumnus Christian McKay, in his feature debut. Having played Orson in the solo show Rosebud, at Edinburgh and off Broadway, McKay has had years to hone the characterisation, to transcend mimicry and caricature and tap into the very essence of the man.

He is absolutely phenomenal.

Whether seducing his players via sweetly-spoken flattery or heaping opprobrium on them, slotting cherished sections of The Magnificent Ambersons into a radio serial or lamenting his amorphous, shallow nature, McKay is Welles. He twinkles, he yells, he laughs, he poses and he booms. And in that one moment of heartbreaking self-awareness, he reveals a Kane-like tendency to play the chameleon. "If people can't find you, they can't dislike you," he says. It's a remarkable characterisation - and whenever McKay is on screen, the film radiates excitement. Sadly, that's not the whole story.

The movie is pegged as a coming-of-age tale, unfolding against the backdrop of Welles' legendary Caesar. Our coming-of-ager is Zac Efron, fresh from the High School Musical films. He's cast as a 17-year-old drama student who blags a way into Orson's latest show, where he finds romance with ambitious production assistant Claire Danes. At the same time, he has half an eye on aspiring playwright Zoe Kazan, who hangs around the local museum, staring at an urn. Though Efron is quite good, these conventional, unconvincing, essentially uninteresting romantic elements are given equal billing with the Welles material, leading to dips in quality and a general listlessness whenever Orson - sorry, Christian - is off-screen. That said, the scenes where Welles' influence bleeds into the behaviour of impressionable Efron are amusing and well-handled.

Shot at the Gaiety Theatre, Douglas, in the Isle of Man, Me and Orson Welles does a good job of transmitting both the stress and euphoria of life on the stage. Observer critic Philip French said of the film's Caesar: "Never before have I seen a theatrical production so brilliantly re-created". But while the film does capture the thrill of opening night and the gobsmacking ingenuity of Welles' staging, the acting in that play-within-a-film isn't as impressive - with the notable exception of McKay's Welles-doing-Brutus. In the film too, the rest of the cast appear pretty lacklustre when up against McKay (well, except for Claire Danes, but she's habitually amazing). Ben Chaplin provides moments of pathos and truth as George Coulouris (who went on to play Thatcher in Citizen Kane), but his performance is often just peculiar, while Eddie Marsan appears miscast as Welles' regular backer John Houseman, and Leo Bill is a touch one-note. At least James Tupper gives a fair approximation of the young Joseph Cotten, playing him as an incorrigible skirt-chaser.

The film has a decent period atmosphere, its lively score packed with familiar period tunes. And though there's a torrent of clumsy and distracting '30s pop culture references in the first 10 minutes, the writers are thereafter more discriminating and inventive, incorporating a clever nod to The Third Man - with the character of Cotten emerging from the shadows - and an incredibly moving scene with Welles that foreshadows the ruination of his second masterpiece, The Magnificent Ambersons.

The movie is a long way from being perfect, hampered as it is by a conventional romantic subplot that eats up too much screentime. But at its best it's dazzling and in Christian McKay's Orson Welles it boasts one of the best performances of the last 10 years. (3)
Posted by Rick Burin at 13:57