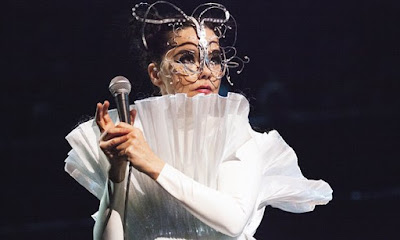 A mesmerising night in the company of one of our time's truly great artists, centred largely on her tortured last record, Vulnicura, the most harrowing break-up record I’ve heard in years. Before a sell-out crowd of over 5,000, backed purely by the strings of the Aurora Orchestra and wearing a flamboyant mask that lights up midway through the first half (obviously), she gives a mesmerising performance that’s utterly raw: flaying her wounds till they’re tender, then cauterising them till they’re healed.

The two 40-minute halves are delicate, discordant exorcisms, punctuated by moments of melodic triumph, inimitable and almost childlike movement, and overwhelming catharsis. It’s unlike anything I’ve experienced at the Hall: the rapt silences during the songs are breathtaking, especially when the orchestra cuts out and it’s just Björk wrestling with her demons in front of an audience of thousands, and when each number comes to a close, the reception is a deafening appreciation. The first half comprises the first six songs of Vulnicura: an epic suite that ranges from the cello-led Stonemilker, with its plea for “open-hearted clarity” to the disarmingly, heartbreakingly straightforward Family, taking in the retrospective sensuality of History of Touches (“every single fuck we had together is in a wondrous timelapse), Black Lake's throbbing minimalist menace and the syncopated hellhole that is Notget.

After the interval she’s back dressed like a fairy librarian and, before closing with two of the three other Vulnicura songs, distorts her poppier past by fitting the likes of Joga (from Homogenic) and I’ve Seen It All (from Selmasongs) into this almost shapeless, intensely personal template of pregnant pauses, pained exhortations and between-the-notes pitching. Pagan Poetry, meanwhile, breaks off into heartstopping a capella, as she laments: "I love him, I love him, I love him", a single beautiful sound in this vast Hall of ghosts. The encore is her mermaid shanty, Anchor Song (from Debut, still perhaps the greatest thing she’s ever done) and Pluto from Homogenic, now stripped of its electronic clothes but not its polite mayhem or that unmistakable chorus.

As she departs and the lights come on, the entire crowd refuses to leave, and instead begins to sing that worldless refrain, building to a seemingly endless roar of gratification. After five minutes of bedlam, Björk returns to the cacophonous Hall to say that “London is very special to me”. Such a beautiful moment, and something I’ve never seen at a show before. But then this whole show was like nothing I’ve seen before, and there is simply no-one else like Björk – or even close. Her performance was bleak and draining and exultant and incredible, and she sang like every dream you’ve ever had. (4/4)

EXHIBITION: Björk Digital at Somerset House – There’s something endlessly fascinating, dizzyingly esoteric and yet gloriously specific about the shape-shifting, now 50-year-old Björk, for whom music is emotional expression and visual art is avant garde experimentation. This exhibition, tied into her big one-off show at the Royal Albert Hall this week, is led by four VR experiences, which possess an enrapturing, all-encompassing embracing of immersion, dropping you on a beach where a multitude of Björks serenade you with Stonemilker, placing you in the back of her throat, showering you with sparks and disorientating you entirely as a prism becomes a boy who becomes a giant, transparent, electronic Björk, and you circle her endlessly, as the music explodes into ferocious discord.

It’s challenging, boundary-warping art that’s only commercial in that it embraces the latest technology. VR was big in the early ‘90s and is now back with a vengeance, though we’re not quite there yet: the progression into 360 degrees (via technical advancement and rotating stools) is a major step forward, but the picture is never as crisp as it should be – which is fractionally alienating – and the sequences can’t yet run more than 10 minutes without causing nausea. There are some other attractions included, most notably a chairless cinema in which fans were sprawled happily on the floor, watching a loop of every music video Björk has ever made: Triumph of the Heart (https://www.youtube.com/watch?v=yvgVsxaqYgA), which I’d never seen before, was perhaps the highlight of the whole installation. A room giving you the chance to play with the Biophilia app was also well worth visiting, though the mini-organs being played at random by a computer seemed to traverse the line into pointless pretension, a charge often levelled at Björk's work by people who voted Leave.

The exhibition as a whole is artistically dazzling, its architect’s intrepid, idiosyncratic pursuit of new worlds to conquer enabled by technology that’s amazing to experience, even if it’s not quite there yet. (3.5/4)

Thanks for reading.
Posted by Rick Burin at 13:12