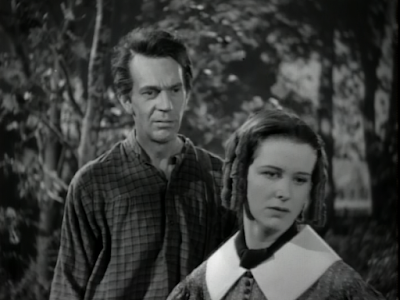 Abe Lincoln in Illinois (John Cromwell, 1940) – This is one of the best films I've seen in a long time: an extraordinarily mature, literature drama of the sort that has never really been in vogue.

Based on a Pulitzer Prize-winning play by Robert E. Sherwood, it was one of just three movies produced by Max Gordon − the theatrical impresario so much a part of '30s popular culture that he got a name-check in Cole Porter's song, Anything Goes − and the only feature released by his 'Plays and Pictures Corp'.

At the time, RKO − under the guidance of studio head George Schaefer − was partnering with independent producers like Sam Goldwyn and Walt Disney to create ambitious, artistic moneymakers. Though they junked the idea after falling out with Orson Welles in 1942, Abe Lincoln in Illinois came along at just the right time. Having produced the play to great acclaim on Broadway in 1938, Gordon took the property and star Raymond Massey to Hollywood, and RKO assembled a top team of craftsmen to put it together, including cinematographer James Wong Howe and the ever underrated composer, Roy Webb.

In the interim between its stage success and its realisation as a film, Fox had also put out a picture about Lincoln, directed by John Ford. Young Mr. Lincoln was an altogether different beast: magical, manipulative, atmospheric wish-fulfilment with more than a hint of Ford's mythmaking about it. "When truth becomes legend, print the legend," says a cynical journalist in Ford's The Man Who Shot Liberty Valance. Abe Lincoln in Illinois does quite the opposite: heavier, more incisive, more human, stripping away the legend to show The Great Emancipator as a man riddled with melancholy, wrestling with his demons, wanting simply to be left alone, until destiny and a loving but neurotic wife (Ruth Gordon) shove him onto the path of greatness.

It takes a while for the film's themes to coalesce. At first it's wrestling, folksiness and runaway pigs, as the young Mr. Lincoln gets work on a barge, in a shop and as postmaster, while pining for a saloon keeper's daughter named Ann Rutledge (Mark Howard). Then tragedy intervenes, Gordon's Mary Todd appears, and darkness takes hold of Lincoln, sucking you in to a portrayal that's like nothing you've seen before: a journey into history, a window in a man's soul, Lincoln greater than you would ever have thought, because it wasn't easy, because he was just a man, because the burden upon him was so unwelcome and so great. The only biopic of a legend that comes close in its incisive unpicking of received wisdom is Hal Ashby's film about Woody Guthrie, Bound for Glory.

Massey is absolutely immense as the former president, particularly in the film's gobsmacking second half, full of magnificent dialogue, complex ideas and a complete lack of Hollywood sheen. It's bruising, difficult, heartbreaking: his journey from gangliness to greatness a picture of sacrifice and self-denial, a Black-Dog-and-all portrayal of a character most commonly shown in American cinema as being akin to Jesus.

As Mary Todd, Gordon matches him. Lincoln's wife is airy, steely, driven and often dislikeable, the key to his greatness and the barrier to his happiness, and Gordon plays those contrasting facets to perfection. I'd never clocked her before as a young(ish) woman (though I've seen Two-Faced Woman a couple of times), only as the beautiful Auschwitz survivor and unexpected sex object in Harold and Maude and a possible Satanist in Rosemary's Baby. Pitching up in '40s Hollywood, she proceeds to give one of the best, most nuanced and realistic performances of the decade, even though she can't be on screen for more than 15 minutes.

By the end, as Lincoln enlists then rejects the phrase "this too shall pass" to lay out the future of the nation, as his backers patronise him behind closed doors, as his wife's neuroses and the march to war sour his greatest achievement, you realise that not only did they not make films as thematically dense and morally eloquent as Abe Lincoln in Illinois in 1940, but they may not have made one since. (4)

See also: I wrote about my other favourite Lincolns here, and reviewed Spielberg's effort here. 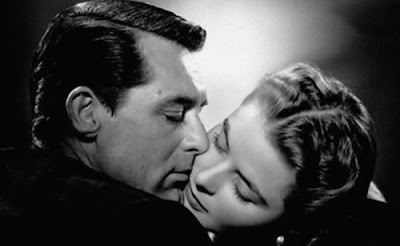 *MINOR SPOILERS*
Notorious (Alfred Hitchcock, 1946) – In some ways the most Hitchcockian film that the Master ever made; in others, like nothing else he ever did, with his familiar style now so effortless and economical that every perfectly-choreographed movement of the camera counts, every minor quirk and flourish is unmistakably his, and yet this matchlessly skilful, distinctive direction is applied to a slick, seductive Hollywood thriller rich in unusually lush romanticism, the heightened emotions and sexy repartee an invigorating counterpoint to the usual nerve-shredding terror.

Ingrid Bergman plays the daughter of a Nazi agent, pressed into doing her bit for Uncle Sam by cynical handler Cary Grant – who won’t express his true feelings for her. Bergman inveigles her way into the confidence – and bed – of shadowy industrialist Claude Rains, but down in the cellar of his mansion things go very wrong, and soon she’s close to death, as an oblivious Grant gets ready to flee the country.

From an inspired opening scene in which we see only the back of Grant's unmistakable head, to that stunning zoom into Bergman’s hand, via the longest kiss in Code-era cinema, it’s a feast for fans of ‘40s film: a trim, sensual story lit by Ben Hecht’s dialogue, Ted Tetzlaff’s glorious cinematography and a pair of leads at their absolute zenith. Grant, a short way into transforming from the best light comedian in Hollywood history to a complacent mahogany annoyance, is curiously and effectively macho, trading kisses, stinging barbs and hurt feelings with the love of his life. Bergman too, tears dripping from her eyes, that voice wavering, that temper flaring, was never better, her gargantuan appeal obscuring her limited range. And as their nemesis, Rains is characteristically superb, managing to wring sympathy from us, even while funnelling funds to Adolf Hitler, because he really, truly loves Bergman – or at least the person he believes she is.

It was the first time the director had had two huge, heavyweight stars and a first-rate foil, and he knows it’s a chance to do something extraordinary. There’s no padding here (save two drab expository scenes almost certainly added by the studio and directed by someone else), but impeccable foreshadowing, plenty of subversion and lashings of black humour, as Hitch acquaints us repeatedly with the staircase that will prove central to the climax, has Rains’ mother (Leopoldine Konstantin) transform from a malignant gossip to a chain-smoking crimelord, and subversively uses champagne bottles – a staple, of course, of trifling, escapist rom-coms – as a symbol of spiralling terror.

Truffaut regarded Notorious as the best film Hitchcock ever made, and the greatest example of “pure cinema” in his canon, the whole story being told by the camera. Having seen it for the first time in 15 years, and for the first time on the big screen, I’m inclined to agree. 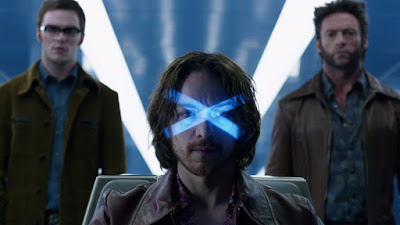 X-Men: Days of Future Past (Bryan Singer, 2014) – This film opens with an absolutely fantastic prank: an unbelievably boring 10-minute CGI action sequence about robots fighting in the dark – pretty much my least favourite thing in movies – which left me momentarily convinced that Bryan Singer had completely lost the fucking plot.

But then he pitches us into the ‘70s, where a lanky-haired Dr Xavier (James McAvoy) is dealing with addiction, the young Magneto (Michael Fassbender) is awash in his usual megalomania, and Mystique (Jennifer Lawrence) is trying to kill an odious weapons manufacturer (Peter Dinklage), setting in motion events that – unless thwarted – will ultimately lead to the extermination of the mutants. The characterisation is rich, the story is fascinating, and the action set pieces are a joy – though a special mention for Quicksilver’s piece de resistance, which is absolute gold.

Sometimes the film struggles with its attempts to knit its well-worn philosophical investigations to Vietnam and the Nixon era, and like First Class it fails to showcase Lawrence’s incredible talent, before ending in a cacophonous 20-minute yawn of blockbuster redundancy, but for the bulk of its running time it’s both interesting and highly entertaining: second only to X2 in this series as an intelligent, imaginative piece of sci-fi that temporarily abated my intense superhero fatigue.

See also: My favourite Ellen Page movie is Hard Candy, and my favourite Peter Dinklage film...? There's only one serious contender. I've also reviewed X-Men, X2 and The Last Stand on the blog, albeit somewhat briefly. 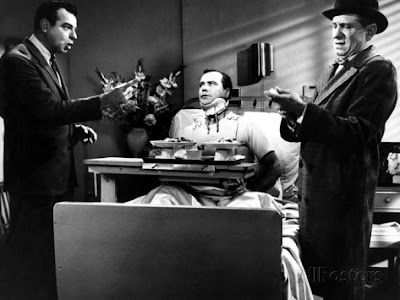 The Fortune Cookie (Billy Wilder, 1966) – This flat Billy Wilder comedy begins poorly and never really gets going, as a news cameraman (Jack Lemmon) gets knocked over at an NFL game and his scheming shyster of a brother-in-law (Walter Matthau) smells big bucks − convincing him that a lawsuit could win him his wife back, and filing for $1m of damages.

It's put together rather like Wilder's last great comedy, One, Two, Three, but it simply doesn't work: the material is weak, Matthau lacks the manic energy of someone like Cagney needed to put this over, and Lemmon is at his most "yaddle addle addle" annoying (that's the sound he makes when he's singing to himself). 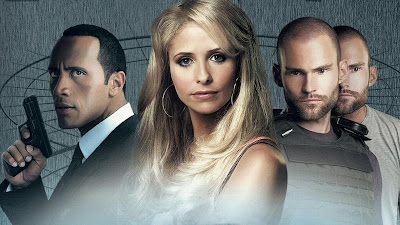 Southland Tales (Richard Kelly, 2006) – I have a soft spot for massively ambitious artistic statements crushed by studio beancounters… but Richard Kelly's apocalyptic follow-up to Donnie Darko is basically Plan 9 Part 2. After half an hour I remembered how short life was and switched it off. (1) 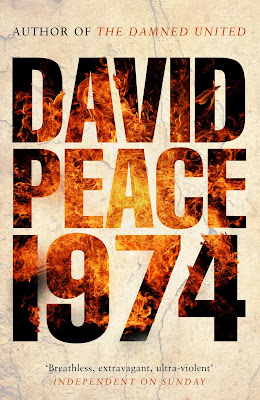 1974 by David Peace (1999) − It must be awful living in David Peace's head. This vitriolic, nasty, uber-violent chronicle of child murders in mid-'70s Yorkshire − and how a local journo gets obliterated by the fallout − is a vivid, visceral portrait of moral bankruptcy and utter alienation. It's altogether unforgettable, but whether that's down to its majestic evocation of a vanished netherworld, its profane poetry or the fact that it's just extremely nihilistic and unpleasant isn't always clear. (3)

Thanks for reading.
Posted by Rick Burin at 18:10