Caroline Proust, My Night at Maud's and the birth of satire − Reviews #240

A round-up of some things I never got around to sharing, plus Season 2 of Spiral. 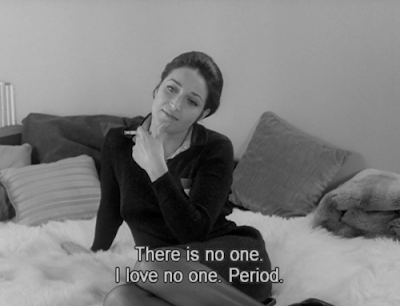 *SOME SPOILERS*
My Night at Maud’s (Eric Rohmer, 1969) − I’ve become a huge Eric Rohmer fan over the past few years. The older I get, and the more complex my idea of life becomes, the more I appreciate his work: full of eroticism, irony and paradox, where the sun only comes out to cast darker shadows. There’s no denying, though, that many of his films follow a certain formula: not just in their plots (his six Moral Tales, made between 1962 and ’72, are all based on F. W. Murnau’s expressionist silent romance, Sunrise), but also in the form and structure he favours. My Night at Maud’s isn’t his best movie, but it’s perhaps his most Rohmerish, almost to the point of exaggeration: it begins slowly, turns tiringly talky and then whacks you in the solar plexus with a coda that’s rooted in the philosophical groundwork he’s been laying, while trading the verbose, probing philosophy for poignant, nail-on-the-head specificity. Stop someone halfway through a Rohmer film, and they might tell you they’re bored. Ask them what they think at the finish, and they’ll tell you they’re floored.

My Night at Maud’s – his most famous and popular film, and the third of his Moral Tales (though released after part four, La collectionneuse) – reminds me a bit of Melville’s superb and atypical Leon Morin, Priest, in which a sexually frustrated war widow becomes infatuated with a kind, cerebral and undeniably hot man of the cloth (Jean-Paul Belmondo). This too is an exploration of sex and spirituality, though not of celibacy, as a practical but serious Catholic (Jean-Louis Trintignant), not entirely unlike Rohmer himself, is caught between two women: one whom he sees as pure and innocent – blonde churchgoer Françoise (Marie-Christine Barrault, the niece of Jean-Pierre, star of the greatest French film of all, Les enfants du paradis) – and the other whom he dismisses as too slutty and too atheist, Maud (Françoise Fabian).

The film’s opening and closing chapters are dazzlingly presented, but the middle-section – the night at Maud’s – is almost wilfully uncinematic in conventional terms, consistingly largely of Trintignant and Fabian in a room, chatting circularly about faith and attraction. The presentation, aside from a single cut-away to a snowy exterior, is drab and restricted, but it forces us to focus on the nuances, zoning in on the basic incongruity of the situation, as Trintignant’s Jean-Louis mounts an aggressively calm, contextualised campaign of verbal self-justification, as his passions are stoked by this woman who seems to represent everything he purports to detest, and yet on some level is also everything he wants: and that’s not just a sexual level, he finds her invigorating and fascinating, a philosophical adversary and yet perhaps a spiritual twin. His face tells the story, as his voice lies. That disconnect between a character’s actual desires and what they will admit, even to themselves – that gaping chasm of self-awareness – is what powers these films.

I’m not a big fan of Trintignant generally, but here he’s so deep in his quiet, serious but impassioned personification that you can’t imagine what this film would be without him. Barrault is used more as a symbol than as an actress, but works brilliantly as an avatar for Rohmer and Jean-Louis’s collision of humanism and idealism, while Fabian floods the screen with a desperate, exhausted pragmatism that inspires an endless empathy. Sometimes in its central sequence the film does feel too heavily academicised for me, becoming more a discussion of abstract ideas than of these characters’ burning and overwhelming preoccupations, but it’s littered with fascinating insights, and when it turns from mere talk to action and revelation it’s a genuinely explosive film, explosive in the way that only Rohmer’s films are, as a character quietly implodes and it blows us apart. The ending here, picking up five years after the story proper, is one of his biggest departures, biggest gambles and most extraordinary successes, taking us to the beach and flipping the whole film upside down. (3.5) 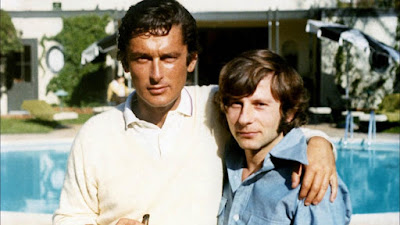 The Kid Stays in the Picture (Nanette Burstein and Brett Morgen, 2002) - The charming former Paramount honcho Robert Evans tells us repeatedly how handsome he is in this classic ‘unreliable narrator’ doc (though he is admittedly quite handsome), which allows him to spout forth on his life and work, and take credit for just about everything, though particularly The Godfather.

There’s some great footage, especially at the beginning when we see his three movie appearances as a young man – which start well and end with him giving arguably the most ridiculous performance of all time – and later when he’s selling the moneymen on his most beloved project (himself), but the bulk of the picture is just artfully animated photos and some film of his house, accompanied by Evans spinning tales in voiceover: his fortuitous rise to prominence, his marriage to Ali McGraw, and his coke-fuelled descent into redundancy and worse. It’s all rather shallow, but also colourful, conspiratorial and highly entertaining: a fast-moving Hollywood saga bringing to life the highlights of his memoir, also called The Kid Stays in the Picture.

That title, incidentally, is what Evans claims legendary Fox producer Daryll F. Zanuck yelled through a bullhorn on the set of The Sun Also Rises, a Hemingway adaptation from which the author – and almost everyone else connected with the film – attempted to sack him. Director Brett Morgen went on to make a functional but enjoyable Rolling Stones doc, Crossfire Hurricane, before compiling that bloody awful Kurt Cobain cinematic biography, Montage of Heck. (3)

The Thick of It (Series 4) − The last, and least, of the definitive modern political comedy's four series traverses mostly old ground, though it's still very funny, and extremely prescient in its depiction of the crumbling Labour Party. Its main flaw, aside from familiarity, is that the character comics playing the Lib Dem leader and his special advisor are too broad and mannered, the incisive material rarely emerging unscathed from their superficial sitcom delivery. Still, the first instalment − in which outdated 'one nation' Tory Peter Mannion (Roger Allam) attempts to launch a tech initiative − is a classic, and the double-length penultimate episode concerning a public inquiry is ambitious, cleverly conceived and extremely impressive. (3) 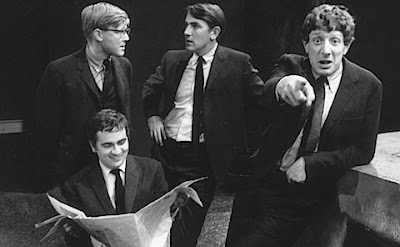 Beyond the Fringe (1964) − It’d be convenient if Beyond the Fringe no longer existed – most of it, anyway. This astonishingly popular comic revue was so important and so influential, single-handedly inspiring the British satire boom of the 1960s, and yet long stretches of it are virtually unwatchable today.

The best routines are all Peter Cook’s, and the best of those are as funny as anything he ever did: the ‘Great Train Robbery’ sketch, with its overly literal investigating officer, the ‘Perkins’ section of The Aftermyth of War – in which Jonathan Miller’s private is asked to make an entirely futile sacrifice – the surrealistic monologue by a regretful miner, ‘The End Is Nigh’, which closes the show, and the famous ‘One Leg Too Few’ (with Dudley Moore as a manically cheery, one-legged actor auditioning for the role of Tarzan), which was added midway through the run.

The rest of the two-hour show ranges largely from the pale to the painful: Miller mugging, Moore playing interminable ‘comic’ piano pieces, and Alan Bennett apparently ill at ease with a succession of sketches that require him to play posh idiots; of the non-Cook pieces, only his T. E. Lawrence skit stands the test of time, as Bennett recalls his brief friendship with the famed adventurer, which begins with the narrator accidentally going to the wrong house where he mistakes a schoolboy for the aged Lawrence. (2.5) 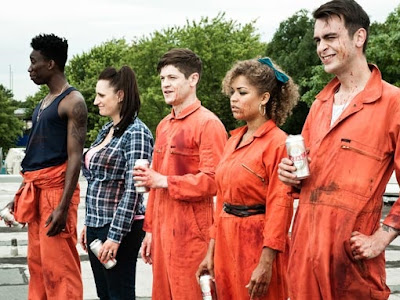 Misfits (Series 3, 2011) – This third series is a big step down from the first two, struggling to know what to do with the metaphysical relationship between Simon (Iwan Rheon) and Alisha (Antonia Thomas) developed so stunningly last time out, until a dazzling conclusion to the final episode, and offering little in the way of compelling through-lines. Instead it serves up a succession of self-contained outings that are often involving and amusing, but sometimes just a little desperate (an episode about Nazis has an astonishingly good prologue but then goes awry, with little to say and a completely nonsensical treatment of time-travel; and another in which Simon is manipulated by a comic book artist begins to unpick the fabric of the programme). With Nathan – the funniest character in the show – now written out, the bulk of the comedic burden falls on newcomer Rudy (Joseph Gilgun). While it takes an episode to get used to his big performance, he is extremely funny, but he isn’t properly integrated into the ensemble: often he’s grandstanding brilliantly and the others are simply forced to pull faces in the background, an awkward juxtaposition that stops you from becoming immersed in the action. The third series is a pleasant enough time-filler, but it’s not exceptional as the first two series were, at least until it wraps up Simon’s story in perfect, mythmaking fashion. (3) 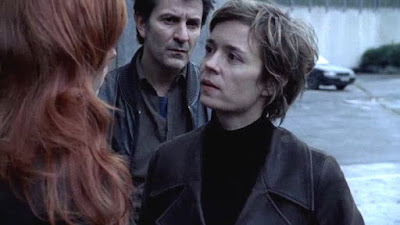 Spiral (Season 2, 2008) – This second series retools the original template to perfection: as sexycop Laure Berthaud and her team launch a season-long war on dealers, the incidental, self-contained storylines are stripped down to the bare essentials, the purpose of them now to pad out an hour’s TV but to shine a light into the corners of its characters. Original, involving, literate, confrontational and, in its denouement, almost unwatchably tense, it offers a gallery of new characters – including brilliant undercover agent Samy – revels in the multi-layered, multi-faceted complexity of its others, and turns an interesting show into one that’s simply unmissable. I start on the next series tonight. (4)

Thanks for reading.
Posted by Rick Burin at 13:23