Everything I've watched in the last couple of weeks. 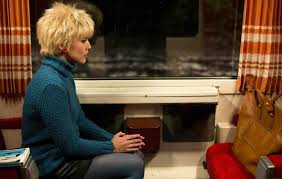 CINEMA: Julieta (Pedro Almodovar, 2015) – A wonderful, extremely powerful film about a middle-aged woman (Emma Suarez) willing to give up everything she has for a chance to reconnect with her estranged daughter. In flashback, we learn her story.

There's such a great feel to this movie − the sense that you're in the hands of a master in complete control − which underneath its sheen of sadness is so sexy, and so emotionally violent. It reminded me of Paris, Texas, of Philip Roth's Pulitzer-winning novel American Pastoral, of Tornatore's gut-punch of a Director's Cut of Cinema Paradiso, of Douglas Sirk's woman's pictures, and also of Bunuel in its aggressively unconventional decision to cast Adriana Ugarte as the young Julieta, and have her meet Suarez's characterisation in the most abrupt, surprising way.

For all that, though, it rarely feels derivative, it simply exists in that world of complex choices, life-altering epiphanies and mistakes, and misguided interventions; a world with a dearth of easy answers.

It sucks you in for 100 minutes, and when it's over it stays with you. Not just the gradually unwrapping story, nor Suarez's superb performance, but the way it forces you to interrogate the way that you live your own life. It's quite something. (3.5) 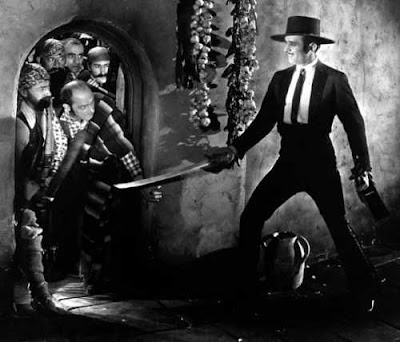 Don Q, Son of Zorro (Donald Crisp, 1925) – Perhaps the most purely entertaining movie Doug Fairbanks ever made − and that’s saying something. As the title suggests, he stars as Zorro's son, who travels to his ancestral land of Spain, charms archduke Warner Oland, woos decorous socialite Mary Astor (a perfect love interest), and is then embroiled in scandal, retreating to the ruins of his family's castle as he plots to clear his name.

It's not as ambitious and groundbreaking as some of his other silent swashbucklers − which might be why it's so little known − and nor are the stakes as high, but this sequel to his career-changing Mark of Zorro is formula-filmmaking for the ages, full of delightfully soppy romance, deftly-handled intrigue and superb stuntwork (as well as a few bits where the star is like a kid pointlessly showing off). It does dip a little in the mid-section, becoming too preoccupied by plot, but by introducing Zorro himself in the second half (also played by Fairbanks), it also shows the star's growing awareness of his own place in big screen mythology, a subject he would revisit to stunning effect in his silent swansong, The Iron Mask<>.

I wasn't expecting a great deal, to be honest, but I'd rank it well above the star's more celebrated Three Musketeers and Thief of Bagdad. (3.5) 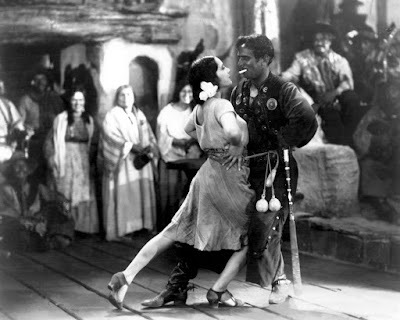 The Gaucho (F. Richard Jones, 1927) – This is by far the least of Doug Fairbanks’ eight silent swashbucklers – a portentous, heavy-handed and often deathly slow film about faith – though when it’s good, it’s very good indeed.

The star plays a near-mythic ‘gaucho’ (Mexican cowboy) who travels to a Lourdes-like shrine with the intention of robbing it, only to have a conspicuous and long-winded change of heart. Despite a promising cast including Three Musketeers villain Nigel de Brulier (as a saintly cleric) and 'Mexican spitfire' Lupe Velez (playing a tempestuous sexpot not unlike her real self), it’s an oddly unsatisfying movie: aloof, brusque and ponderous, where Fairbanks’ vehicles are usually so intimate and charming, and not helped by a synth-led score on the Kino DVD that's as dated as the movie. I'm a sucker for a religious film done right, but this one doesn't come close.

Its saving graces are a pair of short sequences exhibiting genuine movie magic – Fairbanks doing trick-stunts on a horse, and persuading his followers to tow away an entire house just to impress his girlfriend – and two of the most exuberant, exciting action scenes of the star’s career, as he takes an entire fort single-handedly, and later swings through the trees with a grace and elan that Tarzan himself never managed.

Those glorious set-pieces give a welcome respite from the message with which we're being hit repeatedly but belabouredly over the head in this peculiar mash-up of The Mark of Zorro and The Song of Bernadette (the star had got the idea while visiting Lourdes), and reminds you of just how fun Fairbanks' films usually are. (2) 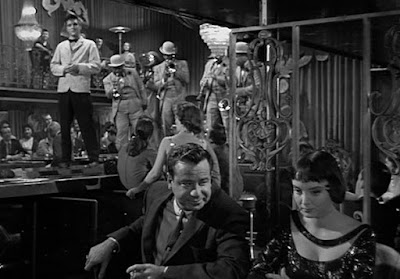 King Creole (Michael Curtiz, 1958) – In 1961, Elvis put out two movies: a muddled but serious-minded Clifford Odets drama called Wild in the Country, which lost money, and a splashy, stupid musical by the name of Blue Hawaii, which made $3m. After that, the die was cast: he would only make thin, throwaway movies, and he never need worry about trying to be a serious actor ever again. Before that, though, the King did some really interesting work, particularly in Jailhouse Rock and Flaming Star − in which he gave his best performances − and in King Creole, which is probably his stand-out film.

This Louisiana-set crime film is a bit trite in places, and slightly overlong, but it's also dramatically satisfying, beautifully shot by Howard Hawks regular (and Gun Crazy cinematographer) Russell Harlan, full of good music, and with a strong supporting cast, led by Carolyn Jones, who's terrific as Connie, the sexy, unhappy, neurotic kept woman of sadistic gangster Walter Matthau. Elvis is pretty good in the lead too, playing a slightly lost school leaver who winds up singing in Paul Stewart's rundown club, while antagonising the local hoods and battling his weak but puritanical father (Dean Jagger).

Sometimes the film trips up while trying to make the star seem both exciting and palatable to middle America, but at other times it articulates a young man's search for identity, success and balance really well, and director Michael Curtiz − who made Casablanca, amongst numerous other Warner classics of the Golden Era − creates an effective Creole milieu of dark alleys, jazz dives and, most memorably, wood jetties on sun-dappled water, the storm passed or perhaps just about to properly begin. Much of the work is done, though, by a pre-credit number in which black street peddlers call out the names of their wares, pitching you straight into this time and this place.

You can see why it didn't do as well as Blue Hawaii: it's cynical, sometimes complex and decidedly bleak, but it's also a vision of what Elvis's career might have been (especially if his manager had let him appear in Bob Mitchum's B-movie, Thunder Road, the same year!), as well as a bruising, brooding little film on its own terms. (3) 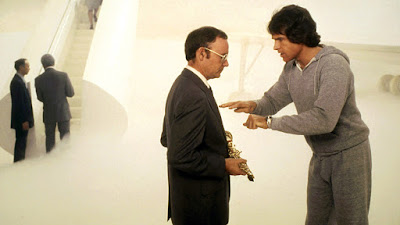 Heaven Can Wait (Warren Beatty and Buck Henry, 1978) – This Warren Beatty star vehicle takes its name from one immortal '40s rom-com − Ernst Lubitsch's classic tale of a self-hating philanderer − but is a remake of another, the superb, supernatural Here Comes Mr Jordan, one of the most refreshing and original films of its decade.

Beatty is Joe Pendleton, in this iteration a star NFL quarterback, who is taken to Heaven prematurely by a bumbling archangel, then gets the chance to return, but in the body of a heartless industrialist.

I've wanted to see this for a while, but found it maddeningly uneven: a jarring collection of New Hollywood tics, vastly differing styles of comedic acting, narcissistic excesses (like Beatty being so keen to be the centre of attention that we never see the bodies he inhabits, just his), highly enjoyable wish fulfilment and − just when you've decided that they kind of ballsed this one up − a truly beautiful ending.

It's not in the same league as the original, then but nor is it completely dispensable. Julie Christie does increasingly well as the love interest, considering she's pretty miscast, James Mason is an ideal replacement for the late, lamented Claude Rains, and Beatty is, well, as unbearable and impressive and flawed and self-indulgent and limited and talented as usual. (2.5) 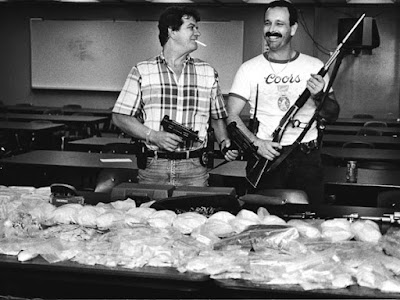 Cocaine Cowboys (Billy Corben, 2013) − This is like one of those FHM or ShortList long reads about true crime: trashy, morally inchoate, artistically indefensible but actually quite enjoyable. Edited by someone who seems to have quite recently taken cocaine, it's a fast-paced, choppy sail through the Miami drug wars of the late-'70s and early-'80s, based on the testimonies of two traffickers, a hitman, a dodgy lawyer and a couple of investigators, mixed with archive news footage and completely unnecessary photos of bloodied corpses. (2.5) 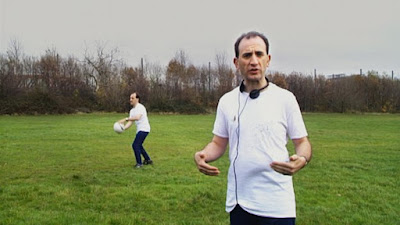 The Armando Iannucci Shows (2001) − There's so much going on here, and most of it is brilliant. Armando Iannucci, perhaps the outstanding comedy creator of his generation, guides us through eight episodes of sketches on such diverse subjects as 'Communication' and 'Twats'. The early episodes are the best, but it's consistently and thrillingly original, with a special mention for his Derby County song, the racist police horses and a man whose seemingly effortless dinner party banter isn't entirely natural. (3.5) 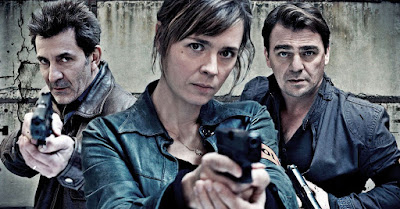 Spiral (Series 1, 2008) − An outstanding crime series from France which is chilling, nasty and at the most surprising times extraordinarily humane. It takes a while to get going, and the overarching narrative about a brutal murder is more interesting than the self-contained cases in each episode, but stick with it: it has a rich cast of fascinating characters, and episodes six and seven are absolutely astonishing. Also, I am in love with Laure Berthaud (Caroline Proust), the flawed, feminist cop with the killer smile. (3.5)