Ten things I love about Titanic 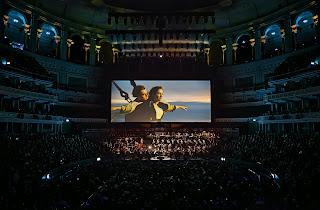 I never get tired of watching it, and last night I was lucky enough to see it at my office (the Royal Albert Hall), with an on-stage Q&A from James Horner and producer Jon Landau, a cameo from James Cameron, and the whole film accompanied by the Royal Philharmonic Concert Orchestra with Sissel Kyrkjebø. It was one of the best shows I’ve ever seen, and they even put my name in the credits at the end. I still haven’t come down from this, as you might be able to tell.

Because I love Titanic.

I’ve seen it a lot over the years. More times, in fact, than James Cameron’s wife (and Old Rose’s granddaughter) Suzy Amis, who’s only watched it three times all the way through (trivia bomb). As with my recent Star Wars reviews, here are 10 things I love about Titanic:

1. The pre-amble. What a strange, fascinating way to pitch us into an old-fashioned story: chiming with the cynicism of a modern audience, then chucking all of that out and asking us to join it, as an 101-year-old woman (Gloria Stuart) bewitches a bunch of mercenaries with her tale of forbidden love, and we fade into...

2. The dockside. On the surface, Jack’s card game and dash to the boat are pure Hollywood, but they’re underscored by the film’s fatalistic themes, giving that blast of euphoria a melancholy undertow.

3. Billy Zane. The finest performance by an eyebrow since Roger Moore was replaced as Bond. Yes it all goes a bit silly when he runs around with a gun and steals a child, but I enjoy his slimy malevolence far more than anyone else seems to, particularly the elitist nastiness he enjoys snidely dispensing in the film’s first half. 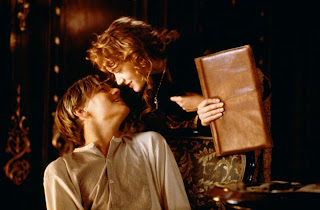 4. That chemistry. Perhaps the only time Kate Winslet’s love interest has been prettier than her. She and DiCaprio are just perfect: so sincere, each completing the shortcomings of the other, sparks flying through every spitting contest, soppy utterance or action sequence. 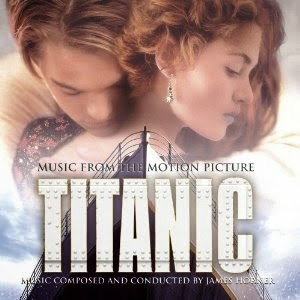 5. The music. Last night made it even more obvious - if such a thing is possible - just what a wonderful score this movie has, augmented by Sissel’s ethereal, wordless vocalising. 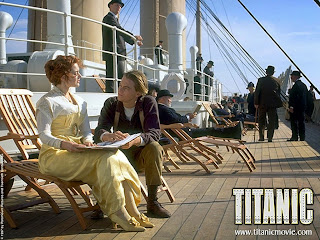 7. Atmosphere. A $200m budget probably helps, but so does Cameron’s obsessively hands-on approach to every part of the production. The boat’s scale and its appointments seem scrupulously faithful and its evocation of life on the ship – while leaning a little on caricature – is entirely persuasive, bringing to life both vivid archetypes and genuine historical figures who boarded the 'berg-hitting vessel.

8. “I’m the king of the world”, “So, you wanna go to a real party?”, “Never let go”, and other one-liners. I used to find some of the dialogue a bit trite, I don’t anymore: the film is so sincere, so sure in its convictions that it just sweeps you away, like a big flood in an ocean liner. 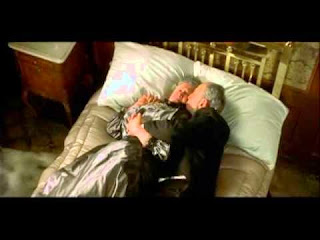 9. Nearer My God to Thee. One of my favourite set-pieces in ‘90s cinema, and by far the most moving sequence in the movie, with spellbinding imagery and sound, and a devastating emotional wallop: this was real, and this was its human cost. Just sublime.

I also liked the way that it predated Avengers Assemble by including all my favourite superheroes, like Captain Birds Eye (Bernard Hill) and heroic Ed Miliband (Ioan Gruffudd).

Did I mention that I love Titanic.
Posted by Rick Burin at 13:08