The Big Sleep as you've never seen it 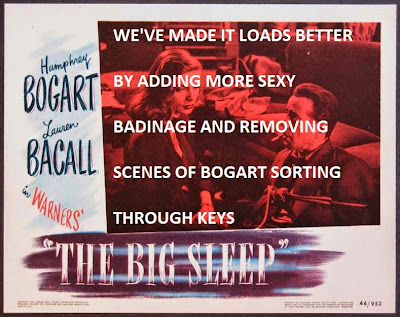 The Big Sleep is one of the most purely entertaining films of the 1940s, a zingy, slangy, sexy slice of film noir that takes full advantage of a classic Raymond Chandler story, a script by three of the best writers in Hollywood (including Leigh Brackett, who co-wrote Rio Bravo and The Empire Strikes Back), and Bogie and Bacall's sizzling chemistry.

Shabby detective Philip Marlowe (Bogart) is hired by the ailing General Sternwood (Charles Waldron) to foil a blackmailing racket, and finds himself up to his neck in corpses and amorous dames, including the general's smoking-hot daughter, Mrs Rutledge (Lauren Bacall).

So far, so legendary.

The movie has a peculiar history, though. Originally wrapping in January 1945, just as Bacall's debut - To Have and Have Not - hit cinema screens and made her an instant sensation, The Big Sleep was ready for release by March of that year. But with World War Two nearing a close, Warner shelved the film as they rushed to release any and all propagandist flicks that would soon be rendered redundant. By the time The Big Sleep was reinstated for release in November, Bacall's second film - Confidential Agent - had come out, receiving savage reviews that suggested her career might be over as soon as it had started. 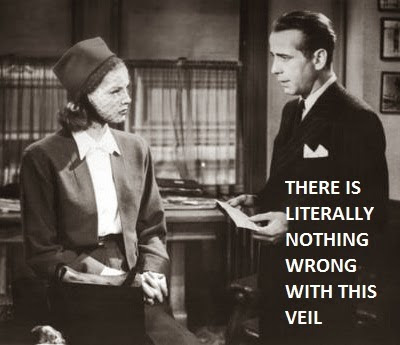 At that point, Bacall's agent, Charles K. Feldman, wrote to the head of the studio, Jack Warner, and urged him to take action: to add more scenes of Bacall, to scrap a scene in which she wore a veil (apparently because he didn't think she looked attractive in it, the mad bastard) and to chop various exposition in order to make way for the new material. Warner wrote back to him almost at once, saying that he'd been thinking exactly the same thing (Warner always said that), and Bogie and Bacall agreed to shoot the additional material if Howard Hawks would return to direct it.

The pre-release version (the one from March 1945, which actually played to US soldiers overseas) is available on the flipside of the Region 1 DVD, and is one of the most fascinating cinematic artefacts currently in popular circulation, the sort of bonus feature you dream about, if you're a massive nerd like me. It runs three minutes longer than the finished cut and has over 18 minutes of alternate material, including: 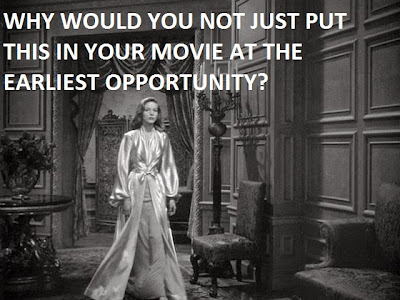 More footage of Marlowe searching Geiger's house. (This is a bit long-winded and was rightly cut for pacing reasons.) Alternate scenes with Marlowe and Carmen in the car, and a different conversation between the detective and his employer's butler. This was ultimately replaced with a superb, daring new scene in Bacall's bedroom that exploits the actress's feline sensuality and her leading man's sardonism (above), and gives the film a welcome injection of eroticism ("You go too far, Marlowe", "Harsh words to throw at a man - especially when he's walking out of your bedroom"). Some dialogue was overdubbed in Reel 4 to cover for the plot changes. 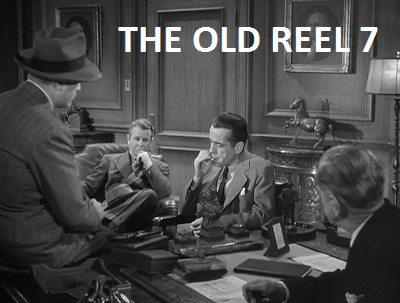 There's a full nine minutes of exposition, explanation and macho sparring in the 1945 version that was ultimately chucked out, with Thomas E. Jackson as a compromised D.A. and James Flavin playing a vaguely incompetent, Marlowe-hating police captain. In this cut sequence, Regis Toomey really comes through for Bogie, as Chief Inspector Bernie Ohls, getting him off the hook when it matters most. Toomey is excellent in the finished film too, but their bromance has much less to it without this chunk of story. Also, if you're someone who finds the finished film hard to follow (i.e. a member of the human race), then this passage should clear things up a bit. Having said that, you can see why it was snipped: whilst it's entertaining (and completely fascinating from a historical perspective), it's also a little slow and turns the movie into more of a procedural than you might expect. This sequence is followed by the notorious 'veil' scene, a piece of exposition in Marlowe's office that simply isn't very interesting, especially when compared to the scorching 'racehorses' passage that replaced it, taking place in the bar at Eddie Mars' casino and graduating from plot-point ticking to an awful lot of innuendo.

The scene where Mrs Rutledge is threatened by one of Eddie Mars' henchman was later redubbed to make her and Marlowe seem more familiar with one another, fitting with the more laid-back, sensual quality of the finished film. 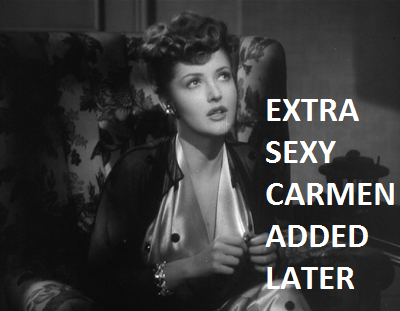 The sequence in which Carmen is waiting in Marlowe's room was added for the theatrical release (she's sitting in his chair, fully-clothed (above), rather than naked in his bed, as she was in Chandler's novel and would be in the '78 version). There's also more information in the final film than in the '45 one regarding Mrs Rutledge getting the DA to drop the case. Here it's just a few lines. In the final film, Marlowe's feelings for her are given greater context, and he ultimately seems like a nicer guy. The '45 version does include a cool bit where Marlowe flicks his guns out of the hidden compartment on the dashboard, though. 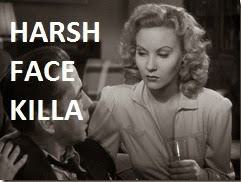 Pat Clark, a bottle blonde with intimidating eyebrows and a rather artificial manner, plays Mrs Eddie Mars in the '45 version. She was unavailable for retakes and replaced by Peggy Knudsen, who's more sparky, energetic and believable (and attractive). Bacall gets fewer close-ups in the original, and they're shot from a less adulatory angle.

So there you have it. The 1945 version has a clearer plot, a couple of interesting additional characters, an alternate Mrs Eddie Mars and a stronger through-line for Bogie and Regis Toomey. For once, though, a messy production history and the interference of a powerful, nosey agent made a movie an awful lot better. The original cut is a very good film, but the final product is a classic, and a seamless-seeming one at that, flowing far more freely, easily and quickly than its earlier incarnation, and possessing an irresistible erotic charge that comes largely from those three extra scenes: two spotlighting Bogie and Bacall's badinage, and one casting further light on Carmen's character.

Still, many of the film's familiar virtues are already in place - like Max Steiner's stunning symphonic score (the way he underlines Elisha Cook's closing moments!) and that perfect closing shot, and it remains an extremely illuminating and valuable piece of film history: essential viewing for anyone with an interest in the Hollywood studio era. 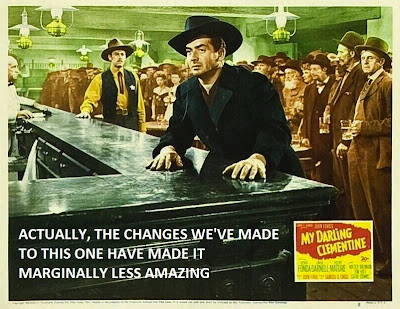 See also: I did a similar piece on My Darling Clementine a few years back now.

Thanks for reading.
Posted by Rick Burin at 17:53