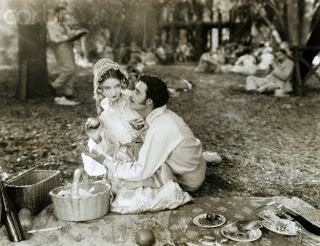 The Lillian Gish reappraisal starts here – who’s with me?

You wouldn’t have thought that Lillian Gish needed re-appraising. After all, she did virtually invent modern screen acting, in collaboration with noted bigot and revolutionary filmmaker D. W. Griffith, starring in his notorious Birth of a Nation, and the follow-up, Intolerance (contrary to popular rumour, that film wasn’t a mea culpa for the racist sentiment of his earlier film, but a response to people he thought were being intolerant of his worldview. Lol).

The mighty Gish wasn’t name-checked at all in Paul Merton’s most recent series on the history of silent film, appearing just once as he made a facile point about over-acting. In the book I’m reading at the moment, William J. Mann’s Wisecracker, the author gleefully notes that Gish had been excluded from a contemporary list of people with a commodity known as ‘It’ (broadly sex appeal), writing that she “was widely presumed to have no sex drive at all”. Even in the introduction to Annie Laurie at London’s Barbican Centre on Sunday, the marketing person from the Hippodrome Festival who presented the film had just three things to say about Gish: that she had made Annie Laurie to try to change her screen image to something sexier, that she was one of the hardest working actresses in silent cinema, and that when she emoted, people outside the studio walls often came running to see if she was OK, as she was so loud they thought she was in genuine distress. Aside from the fact I’m calling bullshit on that, since post-1920 soundstages were almost all indoors, and encased in massive studio lots, there’s a more important point at stake here – the reputation of arguably the greatest actress who ever lived.

Louise Brooks, who was no-one in terms of popularity in the heyday of silent film but is now an iconic figure across the Western world, wrote a superb essay on Gish in the 1970s, where she cast the actress as a proto-feminist who bought and adapted her own stories, chose her directors, starred in them and even handled the publicity. She argued, very persuasively, that Gish’s career as a leading actress was wrecked not by changing tastes but by sexist studio heads who resented her power and her pay packet. (Incidentally, it’s worth noting that the ass-kicking, non-conformist Gish was also a staunch Republican who was vehemently opposed to child labour laws, having gone on the stage as a kid to support her family!)

Beyond the trendsetting, though, there’s something just as important: the sheer acting talent of the woman. There are only a handful of artists in the field of acting whose mastery of the medium is so complete that they seem to be doing something utterly new: Jason Robards, Emily Watson, Wendy Hiller – it doesn’t happen very often. Gish is one of those. You can see it in Annie Laurie. Everything that works here does so because of her.

The plotting is perfunctory – some fictionialised, Hollywoodised rubbish based broadly around the Glencoe Massacre, as Gish’s aristocrat falls in love with the world’s burliest man (Norman Kerry) and finds herself caught between warring Scottish clans – and the first half is frankly quite boring, but the second has some magical moments, including tremendous use of the titular song, and two action scenes in which Gish loses her shit. The idea that she was melodramatic simply isn’t true: hysteria was just a card she could play, and play beautifully. Here she does it for, what, 15 seconds, then 20, across two hours? It’s in keeping with the plot, and artfully done, creating two of the best sequences in the movie.

The second is one of the few times that director John S. Robertson actually does anything half decent: a thrilling, high-octane chase, with a wide-eyed Gish legging it up a mountainside, pursued by a dude with a gun, the camera scurrying ahead of her, framed on her face and frame. An interesting footnote, though: Robertson was later the local, Stetson-wearing eccentric in the small Los Angeles town where Byrds songwriter Chris Hillman grew up, and the band’s song Old John Robertson (from their classic Notorious Byrd Brothers record) is about how he was ridiculed by the local kids, who knew nothing of his past as a Hollywood director. Here, the music accompanying his film came from Shona Mooney’s folk trio, playing their specially commissioned score for just the second time, which was both inventive and familiar, in all the right places.

And throughout, Gish – while plagued by personal problems that meant she saw this one as simply a job of work – is transcendent. Take the moment where the plot promotes that pernicious myth that, whatever they say, women do want you to kiss them. A load of dangerous, sexist bollocks, but her character’s conflicted emotions: fear of him, fear of herself, anger, confusion, arousal and joy, are beautifully conveyed in just a few flickers of a moment. It’s not sexless, she’s not over-acting, and there’s no-one rushing from outside a studio wall to check she’s OK. It’s art, pure and simple.

And no-one rocks a Tam o'Shanter like Lillian Gish. 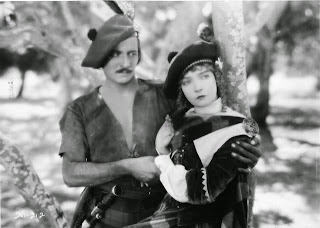 The main ethical problem with La Bohème - based on the same stories as Puccini's opera - is that it's a romance in which the hero (John Gilbert) is a violent, suspicious and abusive bully who spends the first hour gaslighting his girlfriend.

Its main technical problems are that the script is alternately melodramatic or lacking in incident, that the sets are largely dull, and that most of the cast is mediocre.

Lillian Gish, though, is absolutely mesmerising, as another of her gentle, selfless heroines tortured by an unkind world, exhibiting a range of complex emotion, rendered both subtly and explosively, that's pretty much off-the-scale in terms of artistic genius.

And King Vidor, while never approaching the lyrical, ironic brilliance he displays in something like The Crowd, does stud this sometimes clunky-looking film with a handful of gorgeous shots, most utilising windows, railings or Gish's beautiful, matchlessly expressive visage.

Gilbert's performance, by contrast, is pretty big and unfulfilling: like a parody of silent movie acting by someone who's only seen two of them.

But in the end the film's myriad flaws won't be what stay in the mind. It won't even be Edward Everett Horton looking terrifyingly young as one of Gilbert's bohemian cohorts. Instead it'll be Gish telling her lover that he's foolish to be jealous, a look of fond, intense compassion on her funny little 1920s face.

Thanks for reading. #GishFest15 continues with A Romance of Happy Valley and True Heart Susie (both screening as part of BFI Southbank's D. W. Griffith season) over the next couple of weeks.
Posted by Rick Burin at 12:39