Ten things I love about Return of the Jedi 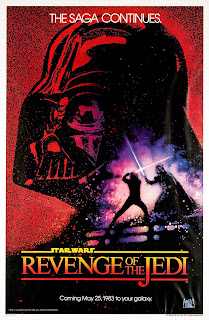 That last minute "oh yeah but actually isn't revenge supposed to be bad?" name-change in full.

This is the final part of my '10 things I love' series about each of the original Star Wars trilogy, following:
Star Wars
The Empire Strikes Back

Yes, it's a bit of a step down from the first two: half a brilliant movie, half a mediocre one aimed at a fictional audience of Ewok super-fans, but it's still exceptionally fun, with a slew of truly great moments. Here are 10 things I love about Jedi: 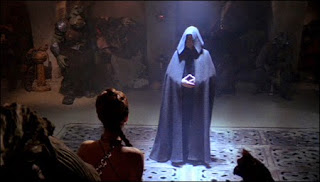 1. The Jedi knight. Hamill is no longer the callow youth dreaming of glory, but the height of zen, strolling into the heart of the enemy and casting aside the puny-minded minions with a quiet word and a wave of the hand. 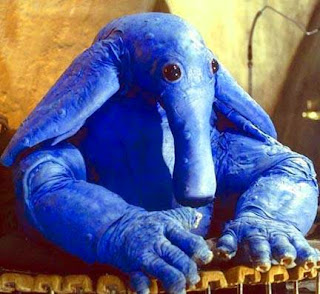 2. Incomprehensible aliens. There's only one Star Wars film without a load of stupid aliens in it, and that's Empire. That's also the only one George Lucas didn't write. There are loads in Jedi. On one level they're completely unnecessary, distracting from the main story and slowing the film's momentum. On another, I'm completely in love with the fact that so much nerdy care has gone into creating characters who serve almost no function: they all have names, and back stories, and elaborate production design. There's Salacious Crumb, a maniacally giggling rat that inexplicably eats C-3PO's eye, Admiral Ackbar, memorably described by one Twitterer as "a prawn that is an admiral", and Nien Nunb, the Falcon co-pilot whose sole contribution to popular culture is a hilarious chortle. And there's an albino with a neck that's a snake, and balls on his forehead (Bib Fortuna). Best of all, though, is Max Rebo, the cute, freelance disco-jazz elephant, who brings his ensemble to Jabba's Palace for a gig (the very definition of getting in with the wrong crowd) and then unaccountably hangs around till the next morning to watch them murder some prisoners, getting blown up for his trouble.

3. Fun with the Sarlacc. One of the defining action set-pieces of the series. In the original, the Sarlacc just has a lot of teeth and a couple of tentacles, which I rather prefer. The sequence is full of serial-like thrills, including Luke's own novel take on walking the plank, Boba Fett's nifty gadgetry, and Luke and Leia swinging across the toothy canyon. 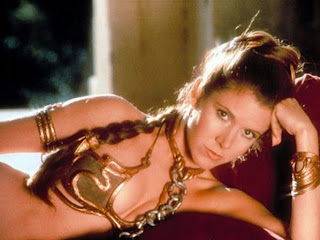 4. Bikini Leia. On one level there's a credible argument that Leia is unnecessarily and gratuitously sexualised in a way that she wasn't in either previous film, a process that none of the male characters are forced to undergo. This culminates in a battle to the death with Jabba the Hutt that's the epitome of undisguised kink, as she breathlessly chokes a slug until goo comes out of the end. It's an iconic outfit, though (famously referenced in F.R.I.E.N.D.S). And also she's hot.

5. Speeder bikes. They're fast, they hover, and they only seem to be used on the singularly unsuitable forest planet of Endor. I like it when they crash into trees and explode. The version of the chase sequence in the original cut is one of the few things slightly improved in the Special Edition, as they cleaned up a little dodgy back-projection, one of my bête noirs.

6. Luke and Leia. With Lucas and Kasdan struggling to write Han, who's turned from a sexy intergalactic badass into a slightly envious intergalactic bystander, the focus is on the series' most sexually compatible siblings. Their talk on the rope-walk (lifted almost verbatim for last week's Star Wars VII teaser) is just glorious: proper tingle-down-the-spine stuff. "The Force is strong in my family," intones Hamill, with more credibility than usual. 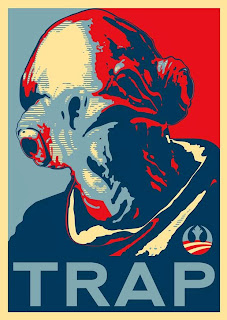 7. "It's a trap." So the Empire left four Stormtroopers to guard the control room for their deflector shield? That's just bad writing. Unless… oh shit. 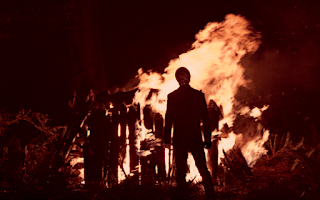 I'm glad they never made those prequels they were talking about. No they didn't, shut up.

Thanks for reading, now please tell me yours. And no you can't just choose all of Max Rebo's tubular fingers.
Posted by Rick Burin at 13:02