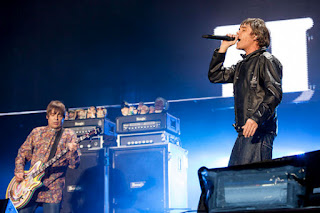 As the 11pm curfew falls, fireworks explode across the Manchester sky and Bob Marley’s Redemption Song floats from the speakers around Heaton Park, it is something like a perfect moment.

It’s strange, perhaps, for the evening’s euphoria to congeal into this tranquil, whispered climax, 70,000 faces turning their backs on the stage to watch pretty patterns in the night sky. Strange for this pivotal moment to occur after the band has disappeared, the reverb of I Am the Resurrection replaced by the whizz-bang of lit gunpowder. But there was nothing ordinary or predictable about a night which most of those 70,000 – not least the four on stage – thought would never happen.

And the musical pay-off? Marley's song is appositely-named, to say the least.

Yes, there are greater wars to be fought on this earth than ones involving Mancunian bands, but this was still a night of redemption for an iconic group that threw it all away not once but twice: first by going missing at the peak of their powers (not all their fault, I'll grant you), and then by inexplicably imploding when they were perfectly poised to cash in commercially and artistically on the British indie guitar boom they did as much as anyone to inspire.

Strolling nonchalantly onto the stage at 9 o'clock sharp, basking in the adulation and then breaking into an atypically rocky I Wanna Be Adored, the Roses set about obliterating the brickbats of tiresome commentators, blowing away concerns that this was only about the money, that it was a pointless exercise, a hollow nostalgia trip or a spectacle unbecoming of a group of 40-year-olds.

Their remarkable two-hour set, before a convivial, woozy, boozy, largely stoned and endlessly pointing audience, included every song from their seminal, self-titled 1989 record, the best three songs from the hubris-tastic follow-up Second Coming – with lost anthem Ten Storey Love Song comprehensively reclaimed by a bellowing crowd – two stand-along singles of inestimable importance, and a trio of unforgettable flipsides. It always seems like a big, pretentious fib when someone claims their favourite song is a b-side, but aside from the first and last songs on their debut, Where Angels Play takes some beating. Tonight we get a glorious reading, segueing into Shoot You Down.

On a stage flanked and backed by big screens showing close-ups mixed with inventive, lemon-heavy visuals, there’s ample room for frontman Ian Brown to prowl, and easy access to a horizontal gangway where he periodically disappears to stroke the hands of the front row. His vocals always get a pounding from cynical critics, but – at least in terms of what you could hear above a perpetual crowd chorus – there was only one song in which he was flat out singing the wrong notes, and that was the closer, I Am the Resurrection. In totemic terms, he was faultless: everything was channelled through him and there was no false gesture (nor any false modesty) in his crowd-commanding performance.

The band had promised a modern spin on their classic sound and they delivered, the same three-piece group delivering a meatier, heavier, more muscular sound, complete with some inspired noodling from guitarist John Squire. If Brown signed up for the gigs on the basis that he could pay for his divorce, Squire presumably did so on the proviso that he be allowed to play a six-minute guitar solo during every song. The one during an exultant Fools Gold was a belter, and the sort of musical diversions that seemed like introspection or even self-indulgence on the second record worked ideally in a live setting, complementing a hit-heavy opening with artistry and originality. I’m not sure everyone was so enamoured by the periodic shifts from singalong to jam session, though. At times you could see feet shifting and slight boredom setting in as Squire settled into another complex fingers-of-fire routine.

There was a rant from Ian Brown about the Royal Family (to whom he dedicated murder fantasy Elizabeth, My Dear), a lot of boasting about the scale of the band's achievement in putting on these shows – self-aggrandisement tinged with self-deprecation – and also the singer’s attempt at a rap, in which the only audible words were “Stone Roses” and “Heaton Park”. But such things were mere trivialities besides a band who just did everything right as they reconnected with fans who had lived for this day, but never expected it to arrive.

The highlights? There were too many to choose from across an exhilarating show, but here’s for starters: a blissful Where Angels Play, versions of Sugar Spun Sister and Made of Stone that lifted you off the ground, and one of the loveliest moments I’ve ever had at a gig: our entire family unit hugging, leaping and singing as one to This Is the One, as all around everyone else did the self same thing.

These ‘80s indie-rock tunes aren’t the important “songs of freedom” to which Marley referred, nor are the audience in need of rescue or emancipation, but – to borrow from another great modern songwriter – the rain falls hard on this humdrum town, and this night of escapism, nostalgia and, yes, redemption, was one we’ll never forget.

I Wanna Be Adored
Mersey Paradise
(Song For My) Sugar Spun Sister
Sally Cinnamon
Where Angels Play/Shoot You Down
Bye Bye Badman
Ten Storey Love Song
Standing Here
Fools Gold
Something's Burning
Waterfall/Don't Stop
Love Spreads (inc unintelligible rap)
Made Of Stone
This Is the One
She Bangs the Drums
Elizabeth, My Dear
I Am The Resurrection

Support acts: I saw a smidgen of The Wailers, who were decent, while main support Primal Scream were excellent, playing a frenetic set lit by stunning versions of some of the best songs on Screamadelica (and unfortunately also doing Swastika Eyes).
Posted by Rick Burin at 21:16