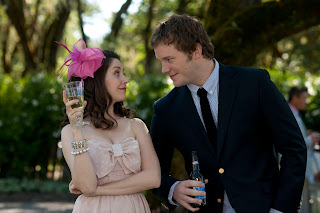 CINEMA: The Five-Year Engagement (Nicholas Stoller, 2012) – This romantic comedy from the Judd Apatow stable starts brilliantly and ends well, but suffers from a sour and silly middle third in which its hero is reinvented as a deeply unhappy deer-hunter with mutton chops. Yes, I know. Sous chef Jason Segel proposes to English girlfriend Emily Blunt, but after her work takes them from San Francisco to the snowy cultural wasteland of Michigan, their relationship begins to sputter. And that’s where the terrifying whiskers come in. Apatow's improvisational approach tends to create fun but flabby films that are always good but never great, with sentimental central stories too serious to engender much comedy, leading him to shove in dozens of subplots or supporting characters to supply the laughs. While that works on a comic level, and provides his films with minor delights, it also results in a certain shapelessness and lack of focus. It's a curious problem, in that the things most appealing about his films are often the ones that shouldn't be there. The movie offers some insight in its treatment of relationships and the practical compromises essential within them, but not quite enough: after a while its central narrative just takes to making the same point over and over. For once, though, the bladder-baiting running time works in Apatow's favour, allowing the film to get back on track after its overly gloomy, distractingly unrealistic mid-section.

Blunt is excellent, of course, her easy, gently-joshing charm creating chemistry with everyone she plays against, but the film’s secret weapons are perhaps the sweetest, funniest second leads since torch singer Lillian Roth and acrobatic comedian Lupino Lane lit up The Love Parade. (That was 1929.) For playing Segel’s best mate and Blunt’s oddly-accented sister are two of the brightest talents from two of the best sitcoms around: Parks and Recreation’s Chris Pratt and Community’s Alison Brie – their parts nicely incorporated into the story. Pratt’s very public song – in which he attempts to list all of Segel’s past conquests to the tune of We Didn’t Start the Fire – and his monologue about the importance of honesty in a relationship are the comic highlights in a film which has many. Because for every wearisome bout of swearing or lazy gag about grandparents, there’s a cracking one-liner or some inspired bit of oddness. Often from the mouth of furious psychologist Randall Park (though special mention to an explosion of adult sibling rivalry conducted in the voices of Elmo and the Cookie Monster). The Five-Year Engagement doesn’t come close to troubling the twin peaks of recent romantic comedy – Just Like Heaven and last year’s Crazy, Stupid, Love – the narrative is too muddled and padded for that, but the appealing leads and a typically strong supporting cast just about make it work, even when the hirsute, murderous Segel takes to serving mead from a hairy mug. (3) 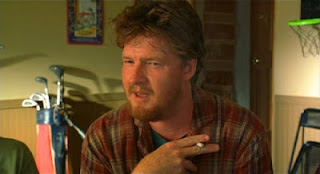 The Tao of Steve (Jenniphr Goodman, 2000) – Tubby, permanently stoned slacker Dex (Donal Logue) has a way with women. Specifically, the way of Steve: a theory of living drawn from the greatest minds down the ages, infused with the cool of McQueen, and geared exclusively towards getting him laid. Then a forgotten figure from his bleary-eyed past appears, forcing a sea-change in his attitudes. The conventional romantic comedy structure houses a genuinely fresh and funny philosophy: incredibly literate, clever and original, with dialogue exchanges that are ambitious and even learned, but knowing, and lacking in pretension. This quiet indie got some attention from movie magazine Empire at the time for the wrongheaded and misleading way the studio attempted to market it as a raunchy sex comedy. It’s a fine film, something really different, with an outstanding performance from Logue and an unusually apt song score. (3.5) 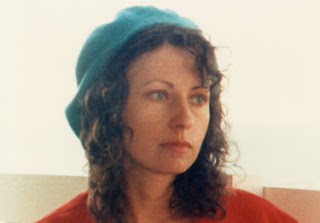 *SPOILERS*
The Green Ray (Eric Rohmer, 1986) - An unhappy, fragile and lonely young woman (Marie Riviere) muddles through encounters with well-meaning friends, confused carnivores (she's a veggie) and free-spirited adventurers during her summer break, hopping disconsolately back and forth between Paris, Biarritz and the mountains, on her way to a (possibly) significant encounter beneath the "green ray" of Saint-Jean-de-Luz's setting sun. My second Rohmer tackles highly original subject matter in an impressively thoughtful, non-judgemental way, though its vivid portrait of a depressed loner who finds it impossible to be "normal" is – almost by definition – tough, meandering and even a little boring in spots, while studded with moments of visual and actorly poetry. (3)

See also: I was blown away by my first Rohmer film, Rendezvous in Paris. You can read about it here.

My first forays into the career of silent comedian Harry Langdon left me decidedly underwhelmed: 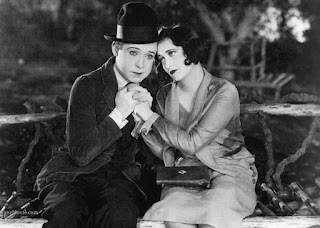 Tramp, Tramp, Tramp (Harry Edwards, 1926) - Harry Langdon is often cited as the fourth great silent clown, but he's not really. He's a strange, sexless, moon-faced, childlike mime with a distinct lack of ambition, whose moments of great comic and emotional lucidity are too often usurped by an undeveloped acting style that frequently just sees him mugging vaguely at the camera. He only appeared in a handful of silent features (including Frank Capra's first directorial effort, The Strong Man, see below), of which this was the first. Langdon plays a shoemaker's son who takes part in a $25,000 cross-country walking race - organised by a corporation-y corporation - in a bid to save his father's shop and win the heart of cloche-hatted poster model Joan Crawford (and for no other reason than that it's funny, let's now remember that Bette Davis called her "the original good time that was had by all"). The film starts off well - there's a particularly sweet scene in which Langdon first meets Crawford, whilst blowing kisses at a billboard of her - but soon reveals itself to be a disjointed collection of erratic set-pieces, rather than a coherent whole. Langdon has neither Chaplin's skill in effortlessly tying together story strands, nor Keaton and Lloyd's gift for building to a frantic finish. There is a cyclone climax that predates Steamboat, Bill Jr's hurricane by two years, but frankly it's rubbish. The best bits, and there are a few genuinely marvellous moments, come when the film is being sensitive, gleefully silly, or preferably both, with a special mention to the sequence where Langdon covers a room with pictures of Crawford - and then with feathers - and later gets caught by a farmer putting a marrow in his trousers. Elsewhere it's mostly the kind of material that does a disservice to silent comics - Langdon pretending to be sleepy or struggling to put on some clothes - while the supposed "thrill" sequences don't work, because the techniques behind them are so transparent, from safety platforms to close-ups, model work and stunt doubles. It's diverting enough, and Crawford's a charming leading lady, but it's hardly Sherlock, Jr, and Harry is certainly no Buster. Mighty fine DVD label Kino have done a Langdon collection in the States, but the Region 2 DVD is one of the worst I've ever encountered, with a clean but washed-out print and the same three pieces of music (total running time: four minutes 30) simply repeated over and over with no attention to the action. (2.5) 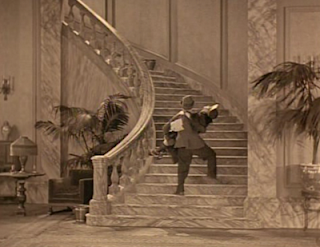 The Strong Man (Frank Capra, 1926) – Harry Langdon’s most famous comedy – and Capra’s first film as director – is a fitfully funny silent that hints at greatness but never sustains such lofty ambitions beyond a couple of minutes at a time. Langdon plays a Belgian Red Cross worker who survives WWI (the scenes set in the trenches are genuinely peculiar, prefiguring the consummate strangeness that was to follow in the notorious Long Pants) and moves to America as a strongman's assistant, all the while searching for the sweet girl whose letters sustained him during the conflict. Quite what was said in the letters, I'm not sure, as the print on the Region 2 DVD is catastrophically bad, while the score simply loops the same four-and-a-half minutes of annoying music used for Tramp, Tramp, Tramp. The central romance, when it finally arrives, is sweet (though Langdon's character again makes little sense, changing from an idiotic man-child to a sensitive leading man in the blink of an eye), while Capra's decision to break away from the star for a full five minutes in the middle of the picture, to contrast the God-fearing folk and beer-swilling reprobates of a border town, is an interesting snapshot of a massive talent at the beginning of his career. But the comedy is wildly erratic, with a handful of great jokes - Langdon accidentally climbing a ladder, encountering a nude model and, most memorably, being kicked off a bus - interspersed with long, tiresome routines that frequently have nothing even resembling a punchline. The climax, in which he takes on a bar-full of heavies using a cannon and a trapeze, is vastly superior to the cyclone set-piece in Tramp, Tramp, Tramp, but pales in comparison to the sorts of routines Buster was putting together at this time, partly because it's quite small-scale, but largely because you don't believe Langdon is really doing those things. And really the problem with the film doesn't lie with Capra's direction, the story - which is a little more streamlined and coherent than before - or the gags. It lies with Langdon. Not only is he not that funny (he has a couple of very nice moments in Tramp, Tramp, Tramp, but here the laughs come almost entirely from the situations into which he's dropped), but he's constantly acting to the camera, a style of performance that was at least 10 years out of date. Good acting can often mean you forget you're watching a film. I forgot I was watching a film here, but only because I felt like I was watching a play. If this was the best Langdon could do, I won't be coming back for more. (2.5) 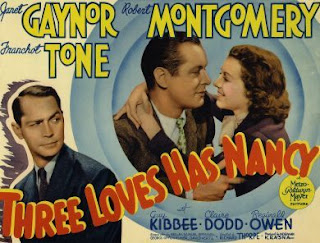 Three Loves Has Nancy (Richard Thorpe, 1938) - After being stood up on her wedding day, straightforward Southern gal Janet Gaynor goes to New York in search of her errant fiance - only to fall in with selfish author Robert Montgomery and his publisher Franchot Tone (in a typically downbeat, sozzled characterisation). This by-the-numbers romantic comedy suffers from some weak material, but benefits from a good - and game - cast, led by Gaynor in an unusually broad, screwballish turn. She has just one real dramatic scene, in a lift, but plays it so beautifully that the whole film seems to rise a couple of storeys. Presumably someone on the ground floor then pushed the button. The funniest bit in the picture is the "sleepwalking" sequence, a nice piece of physical comedy from Tone and Montgomery, though old movie buffs should get a kick out of the identity of Gaynor's beau, revealed at the death. There's also able support from character players like Guy Kibbee, Emma Dunn, Reginald Owen and Charley Grapewin. It's a shame a cast this talented wasn't given a script to match, but it's pleasant enough - well, apart from that joke about killing Chinese babies, that's one of the most horrible things I've ever heard. (2.5)
Posted by Rick Burin at 22:05