Review: Tom Petty and the Heartbreakers at the Royal Albert Hall 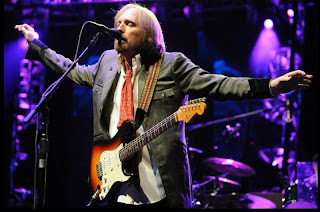 The Floridian rock star has twinkingly commandeered members of other bands, fiercely clung onto songs written for other voices and largely swaggered through a 35-year career that has seen him pegged variously as a punk rock upstart (see Peter Bogdanovich’s doc, Runnin’ Down a Dream, for how he earned that improbable accolade), FM radio regular and nostalgic balladeer.

Tonight, though, he’s overwhelmed. First by the venue – he says twice that it’s been a long-held dream to play the Royal Albert Hall, later adding wistfully, "What a place" – and then by the rapturous crowd, which gives him at least a half-dozen standing ovations (mine was permanent, as I was in the gallery).

After a supporting set from Jonathon Wilson that begins in an average vein only for the singer (who seems to have wandered in from the 1970s) to reveal unexpected levels of musicianship and originality - his every song better than the last - Petty treats the packed hall to a two-and-a-half hour set that includes blistering blues (Good Enough from his most recent album Mojo), acoustic crooning (Something Coming, from the same LP) and a gaggle of glorious hits that span three decades. As opening gambits go, the words: “We’re going to play a lot of songs for you tonight” are about as welcome as they come.

The highlights include a triumphant I Won’t Back Down – a song that simply evokes the stoicism and steel beneath Petty’s blonde, perma-grinning persona – and two cuts from the near-legendary Damn the Torpedos: the romantic rocker Here Comes My Girl (as sweet an evocation of the redemptive power of a good woman as you’ll ever find) and Refugee, which has an unwittingly tasteless chorus but gorgeous verses and one hell of a riff. The former is faster than on record, but still lifts you above the world, while the latter is heavy but crashingly anthemic.

There are crowd pleasers in the shape of the inevitable, wonderful Free Fallin’, Last Dance with Mary Jane (not a personal favourite, but lovely in London), a sing-along Learning to Fly and the iconic early single American Girl. Elsewhere, Petty gives a rare outing to the Hard Promises album track Something Big - which he's striving to rescue from obscurity - and even proffers an invitation to “mosh” via the tuneless audial assault of I Should Have Known It, a rare dud tune on a thrilling night. Don’t Come Around Here No More, which Petty wrote with Dave Stewart then refused to hand over because he was too fond of it, is successfully transformed from a choppy, synth-heavy curio (one of the finest and least typical Petty tracks) into a conventional, pleasing rocker, while the lovely Traveling Wilburys single Handle with Care gets a breezy, beautiful airing, dedicated to fallen comrades Roy Orbison and George Harrison.

Complemented by the Heartbreakers (was there ever a better name for a backing band?), who include Mike Campbell – Petty’s long-time co-conspirator and one of the most underrated lead guitarists around – as well as the wonderfully gifted pianist and organ player Benmont Tench (not Ben 10, that’s a different person), Petty is on top form throughout, exhibiting an effortless stage presence, some tight, tasty licks and an easy rapport with an avid audience who've flocked from across the country.

That inimitable voice has barely faltered since 1979, Petty's energy levels can never be faulted (he even engages in some questionable bum-wiggling at a couple of junctures) and his all-conquering self-confidence is as evident as ever. But tonight, playing his first UK gig in 13 years, at a venue he’s never graced before, it’s coupled to something else: a sense of excitement, wonder and ultimately jubilation. A dream realised – and not just for him.

Listen to Her Heart
You Wreck Me
I Won't Back Down
Here Comes My Girl
Handle with Care
Good Enough
Oh Well (Peter Green-era Fleetwood Mac cover)
Something Big
Don't Come Around Here No More
Free Fallin'
It's Good to Be King
Something Good Coming
Learning to Fly
Yer So Bad
I Should Have Known It
Refugee
Runnin' Down a Dream
Encore:
Mary Jane's Last Dance
American Girl