It's been hard fitting in too many films these past eight days, what with the feast of football, but I've seen a few. This round-up features my first Eric Rohmer, my second viewing of The Other Guys and Jimmy Cagney at his considerable best. 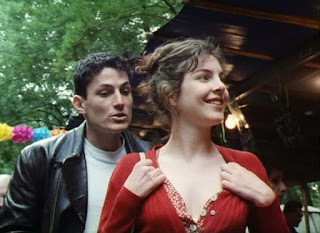 Rendezvous in Paris (Eric Rohmer, 1995) – I try to see a fair mix of movies, but somehow I’d never gotten around to an Eric Rohmer. This was my first, and I thought it was wonderful: an epic outdoor walk-and-talkathon that resembles Before Sunrise and (more obviously) Before Sunset, as various youngish people stroll around the city's less celebrated landmarks and boulevards, espousing their views on love. Each of its three chapters seems low-key, almost incidental at first, before revealing hidden depths. And each is special in its own way. The first (and probably best) sees the excellent Clara Bellar negotiating relationships with a possible cheater, a possible thief and a sizeable coincidence; though as the screenplay insists, “coincidences do happen”. The second concerns an offbeat, adulterous affair played out across various day-long dates, as Serge Renko pleads repeatedly with Aurore Rauscher to leave her boyfriend, while the final chapter is a neat spin on the “live every moment” cliché, with artist Michael Kraft deciding to follow Bénédicte Loyen into and out of a gallery, only to not get quite what he bargained for. The film’s thoughts on life, liberty and the pursuit of women are genuinely original, clever and insightful, and there’s a lovely lightness to the director’s handling. I’m not a Parisian (sorry if this comes as a shock to any of you), but the film seems largely unique in appearing to capture something of the genuine nature and flavour of the city. Old Hollywood idealised it – that old-school presentation still informing films like Ratatouille, A Monster in Paris and Hugo – while later American films rendered it banal and flavourless. The French have had a fair crack, with Malle (Zazie dans le métro) and Delpy (Two Days in Paris) offering vivid, distinctive takes, while a gaggle of notable names provided vastly differing portraits in the occasionally successful portmanteau picture, Paris, je t’aime. But this film – with its endlessly tramping camera pulling you around Paris – brings a painter’s eye, a capricious, coquettish woman’s fancies and a hardened girl’s perspective to bear on the City of Light, creating something indelible and unforgettable from the everyday. (4) 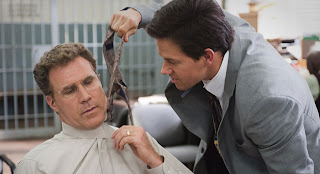 *SPOILERS AND A RUDE WORD*
The Other Guys (Adam McKay, 2010) - When L.A.'s iconic cop duo Danson and Highsmith (The Rock and Samuel L. Jackson) perish in a "head for the trees" 10-storey-jump calamity, it's up to Hoitz (Mark Wahlberg) and Gamble (Will Ferrell) to fill the void. Unfortunately, Hoitz is an office-trashing hothead haunted by his shooting of a sporting celebrity, and Gamble refuses to leave his desk, as he has some very important paperwork to do. The leads have superb chemistry, and Wahlberg is very funny playing it largely straight, but the film is dominated by Ferrell's brilliant performance. When people talk about his best work, they tend to plump for the dramatic roles, in Stranger Than Fiction - a Charlie Kaufman-esque slice of post-modern invention that begins panting a few miles from the finish - Everything Must Go and Woody Allen's Melinda and Melinda. But this is the one: a deft, dialled-down characterisation that creates some incredible comic moments (tuna vs lion, "To give me back my real gun?", the "desk pop") while giving him somewhere to go. Ferrell has generally spent too much of his career yelling, which is why making him a staid, sheltered, officious and easily offended administrator is such a masterstroke - and why his periodic explosions are so much funnier than usual ("I am going to make you eat a plate of human shit!"). The plot, in which an underused Steve Coogan engages in dodgy deals, honestly isn't developed enough to be described as "not very good" and the film flags a little in places before running out of steam at the end (stick around for the post-credits sequence, though, as it's amazing), but at its best it makes me laugh louder and harder than any film I've seen since Team America: "They found your red Prius trying to vote for Ralph Nader", "If you were with me, you wouldn't be here in this strip club, shaking it for dollar bills", "I saw how aggressive you were being, and I thought: 'Wow, I gotta go even bigger than that since we're doing 'bad cop, bad cop'" and - this incapacitated me for an entire minute last night - "We will have sex in your car - it will happen again". Amazing. (4) 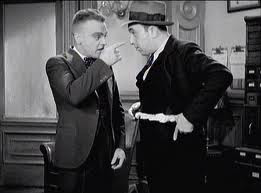 Jimmy the Gent (Michael Curtiz, 1934) – Bloody hell, this is good fun, a lightning-paced comedy about a no-good, scruple-free inheritance fraudster (Jimmy Cagney – who else?) trying to land a 200G case through a series of phony weddings, big fat lies, and furious rants at his sidekick Allen Jenkins – all the while pretending to reform for the benefit of his former flame, the understandably suspicious Bette Davis. It’s reminiscent in its best moments of the legendary Blessed Event (which was originally set to star Cagney), as well as Satan Met a Lady – a screwball comedy riff on The Maltese Falcon also featuring Davis – and powered by a simply explosive central performance. With his unruly eyebrows threatening to escape his face each time he engages in another morally-indefensible tirade, and sporting the harshest haircut I have ever seen (he’s seen from behind in the opening scene, with two big scars across the back of his head), Cagney is almost illegally funny. (3.5) 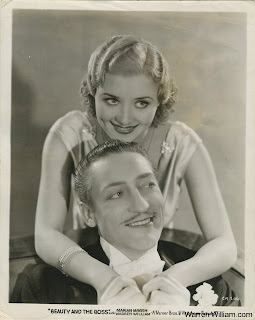 Beauty and the Boss (Roy Del Ruth, 1932) – Banker Warren William has two eyes for the ladies – but only after office hours, which might be why he hasn’t noticed secretary Marian Marsh. Either that or because she’s a machine in a bad hat. This very entertaining, dirty comedy from the master of Pre-Coders (Del Ruth also did Blessed Event and the weird Cagney vehicle Blonde Crazy) is occasionally affected by its leading lady’s woodenness, but has a genuinely sweet centre and an incredible scene – shot from above – in which William chases Marsh around his office, trying to kiss her. After a slightly sluggish opening five, this short, sharp, censorship-free shock becomes a fast-paced mix of romantic drama, makeover show and rude jokes that provides top escapism, an interesting portrait of early-‘30s sexual politics and a perfect example of Hollywood product before the Hays Code stopped everyone’s fun. It also has an amazing trailer, light on footage but heavy on kaleidoscopic images, exciting fonts and hyperbole, which promises things the film could never possibly deliver. (3) 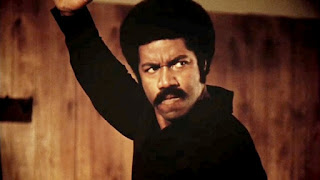 *A FEW SPOILERS*
Black Dynamite (Scott Sanders, 2009) - "Dy-na-mite! Dy-na-mite!" This spoof of blaxploitation movies gets everything right in its send-up of the genre, but is maddeningly inconsistent in terms of laughs. Black Dynamite (Michael Jai White) is a Vietnam vet, ex-CIA agent and all round bad-ass who "use Kung Fu when we want to, has sex when he please". After his brother is killed by The Man and he finds a corrupt politician selling smack to orphans, he cracks open an entire crate of whuppery, only to uncover a plot more dastardly than anything he could have possibly imagined. White is excellent in the lead, doing not-very-good acting brilliantly, and the film looks and particularly sounds just right, with an arsenal of low-rent '70s visual tricks and a heap of apposite funk songs that drip with clumsy exposition. But while there are some hilarious moments - the "puddle of blood" line, a convoluted uncovering of the central mystery that takes in rock 'n' roll, spelling and Roman mythology, the young, orphaned Black Dynamite throwing some bullies through a window, and, especially, the hero's hysterically uncomfortable attempts to frolic gaily in a park - there are entire scenes that pass without a smile, especially towards the end. Part of the problem is that spoofing kung fu isn't funny. It wasn't funny in The Jerk, it wasn't funny in Wayne's World 2 and it isn't funny now. You could argue that at least Black Dynamite plays its martial arts scenes straight, but watching people doing reasonably good kung fu in an apparent pastiche of Black Belt Jones isn't really entertainment - and too much of the short running time consists of precisely that. Sorry to come across all Judge Joyless but, given all the hype around this one, I had high hopes, and it didn't quite deliver. (2.5) 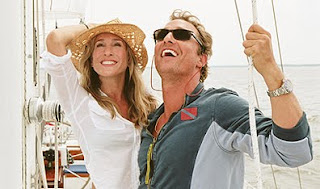 Quick, someone push them in the water.

Failure to Launch (Tom Dey, 2006) – I thought this might be mindless fun. Well, I was half right. Matthew McConaughey’s parents hire professional “interventionist” Sarah Jessica Parker to get him out of their house. Her trick? To make him fall in love with her. It’s a shame they’re both idiots. This is a shallow, ridiculous romantic comedy that moves from one contrived comic situation to another (most of which seem to involve people being bitten by animals), with horrible swings in tone and characters that make no sense, even within the film’s unbelievable parameters. Its only saving grace is a funny supporting performance from Zooey Deschanel, who works wonders with her part as Parker’s moody roommate. (1.5) 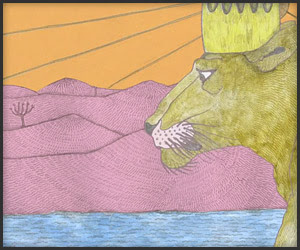 Moonrise Kingdom animation (Various, 2012) - You know those books that Suzy takes with her when she runs away? Well Wes Anderson and a group of illustrators and animators have brought little snippets of those fictional creations to life, in this droll, inventive and attractive short, which packs more humour and heart into its four minutes than many modern American films manage in 90. As someone who watched Failure to Launch out of choice yesterday, I realise this may come across as a little rich. If you liked the feature, it's a wonderful little bonus, with narration by Kara Hayward and links by Bob Balaban. (3.5) You can see it here.