Wes Anderson, Easy A and the problem with J.J. Abrams - Reviews #119

... also featuring Shakespeare, a drunk judge and another plundering of It Happened One Night. 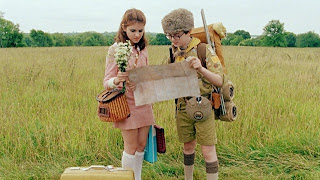 CINEMA: Moonrise Kingdom (Wes Anderson, 2012) is a very Wes Anderson lovers-on-the-lam movie, as two emotionally disturbed 12-year-olds head for the hills, with a scout troop, a cop, social services (Tilda Swinton) and a couple of parents on their tail. After the baffling miscue that was Fantastic Mr. Fox, Anderson resumes his run of deadpan, dead-on films about damaged souls with this poignant portrait of loneliness and love. The first half is absolutely wonderful, full of lovely jokes and the director's usual off-kilter sentimentality, and if the second half can't match it - becoming too bitty, as well as curiously claustrophobic and small-scale at its supposed climax - it's still a very entertaining, amusing and affecting film. The familiar fonts, distinctive musical selections (Benjamin Britten and Hank Williams) and sad-faced protagonists are all present and correct, so if you like Anderson's (non-animated) films, you'll like it. If you don't, you won't. If you like some of them and not others, then you're weird and I don't understand you. (3.5)

Easy A (Will Gluck, 2010) - Olive Penderghast (Emma Stone) unwittingly starts a rumour that she's done a sex, and the next thing you know her whole school is up in arms. If Stone, a bright redhead who's extraordinarily adept at both comedy and drama, is a more talented Lindsay Lohan, then this is a superior - not to mention less stressful - spin on Mean Girls, full of brilliant one-liners and equipped with some razor-sharp satire. The nods to other teen movies seem unnecessary and forced, but the characters are very nicely drawn (while possessing a shared aptitude for densely eloquent phrasing), the unexpected gags come thick and fast (Stanley Tucci and Patricia Clarkson have some great lines as the heroine's parents), and Stone is just absolutely superb. This is one of the best and most enjoyable comedies of the last few years. (3.5) 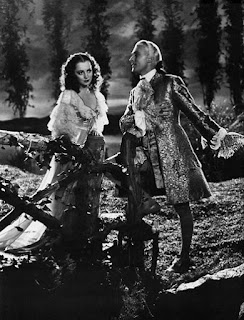 The Great Garrick (James Whale, 1937) is an unusual, sometimes brilliant comedy presenting a fictional chapter from the life of the great English actor David Garrick (Brian Aherne). During a breathtaking opening, the mercurial, caddish thespian manages to both entrance London and offend the French, who've just invited him to star at the Comédie-Française - so they hatch a plan to humiliate him, staging an elaborate ruse during his stay at a rural hotel. When Garrick is tipped off by an old acquaintance (Etienne Girardot) to expect a set-up, he becomes wrongly convinced that the virginal runaway countess falling into his arms (Olivia de Havilland) is somehow involved. Aherne is absolutely sensational, the climactic reveal is stunningly powerful and there's a superb supporting performance from Girardot (the absent, balding comedian who somehow matched John Barrymore in Twentieth Century), but the tricks within the central scheme aren't very funny and the lushly romantic love scenes are somewhat undercut by the fact that Aherne is having de Havilland on. There's still much to enjoy and admire in both the original material and Whale and producer Mervyn LeRoy's masterful evocation of the period, but this tale of a Shakespeare-quothing ham enjoying the affections of de Havilland pales in comparison to 1937's other - the irresistible It's Love I'm After. (3) 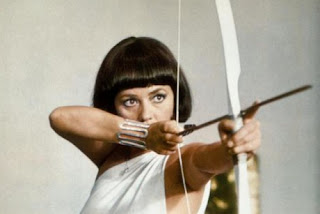 The Bride Wore Black (Francois Truffaut, 1968) - In 1968, Jeanne Moreau will... KILL FERGUS. Possibly. Truffaut's Hitchcock homage, which in turn led to Kill Bill, pays tribute more in style than in theme, as Moreau's widowed bride tracks down the five men responsible for her husband's death (I say "responsible", four of them get a pretty bum rap), amidst numerous clever directorial touches (like the camera snaking around the bushes in front a potential victim's house) and to the strains of Bernard Herrmann's superb score. It isn't deep, particularly credible or very well plotted, it's shot in the peculiar "pastel shade" fashion of so many European films of the '60s - that extends even to the actors' skin; it's difficult to distinguish between the many drawings of Moreau and the real thing - and there's a very silly death scene effect that is almost certainly not a joke, but for the most part it's fast-moving and fun, particularly if you like seeing lecherous Frenchmen being killed. (2.5) 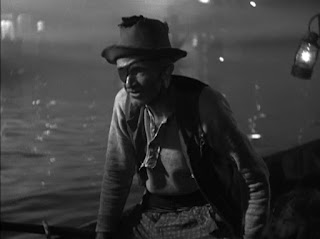 Barbary Coast (Howard Hawks, 1935) - A mediocre Hawks entertainment, on his usual theme of tough, displaced men and women falling in love, with a very strong cast but a rather trite and badly-paced storyline. Miriam Hopkins is the self-consciously tough broad who pitches up in Gold Rush-era San Francisco, and allies herself to casino owner Edward G. Robinson – who has a really funny, ever-present curl trespassing onto the right hand side of his face – only to fall for soppy poet Joel McCrea. To get an idea of just how sanitised the movie is, it's worth noting that Joseph Breen, the head of the Hays Office, thought the original script was the filthiest thing he'd ever read, but regarded the film as absolutely charming. There's some wonderfully poetic Ben Hecht-Charles MacArthur dialogue in the opening exchanges ("However soiled his hands, the journalist goes staggering through life with a beacon raised" – just beautiful), but it dries up alarmingly quickly, while the story degenerates into tiresome bickering, before reinventing itself as a gruesome love letter to vigilantism. Breen seemed to espouse a strict pro-death-penalty, anti-double-bed viewpoint that’s difficult to get on board with nowadays. (I'm also not sure what the form is on everybody celebrating the arrival of a "white woman" - seems a bit racist.)

There are a few atmospheric shots in fog-shrouded San Francisco – though conveying the sweep of the burgeoning town is never even attempted – but the real selling point is the performances. Hopkins gives one of those faintly wooden, sub-Stanwyck, but nonetheless intriguing performances combining genuine, even enrapturing emotional attractiveness with the ability to be a bit irritating, while both Walter Brennan and Robinson make the most of familiar roles: Brennan a hoarse crook with an eyepatch and a quietly-emerging conscience, Robinson a menacingly-mewling tough guy who doesn’t really understand how love works. McCrea is cast in one of those parts that can come off as unbearably smug (I’m thinking of Leslie Howard’s horrendous role in The Petrified Forest), while the script asks him to swallow some rather questionable plot developments, but he’s not bad, playing more fey and sensitive than was usually required. There’s also a very funny bit part for J.M Kerrigan, who shines as a drunk judge in an incongruous, inappropriate but riotous comic interlude. Barbary Coast never really manages to clamber over its main obstacle – a disjointed, at times slightly tedious story – but some very nice acting and the odd good line or arty shot make it worth a look, especially for fans of the director. (2.5) 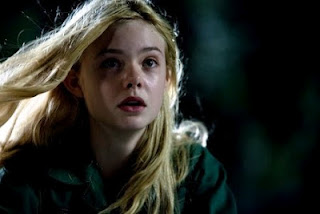 *MINOR SPOILERS*
Super 8 (J.J. Abrams, 2011) is a fraud. A group of kids shooting a homemade horror film see something they shouldn't (clue: it's a big alien), in Abrams' love letter to his teenage self (OK, and the films he saw back then, borrowing liberally from the likes of The Goonies, Gremlins and Stand by Me). On one level, it's a fairly fun ride - I've certainly rarely seen so many bikes in one film - but take a peek under the surface and there's nothing there. To be honest, I have a real problem with Abrams' script. He's clearly read some screenwriting books, but his treatment of bereavement and broken families is horribly mechanical: he can regurgitate manipulative cliches at will, but seems to have nothing to say and no understanding of either genuine human emotion or the patterns of speech. There's no insight or warmth and his characters don't talk like real people, they just talk like people in other films he's watched. On the plus side, Ella Fanning is quite good as the teenage love interest: I like the way she fancies the hero because he paints model trains - that is just like what happens in real life and not at all wish-fulfilment. Her acting debut at the train station is one of the two best scenes in the film; the other is the bit where the friends are all bickering in a diner. Essentially Abrams has just crammed most of Stand by Me into 90 seconds, but for a few seconds you forget you're watching a movie and start to believe in the characters. The rest of it feels terribly hollow and fraudulent. There's actually a film called E.T. from the 1980s that has quite a similar story to this, but is much better. (2) 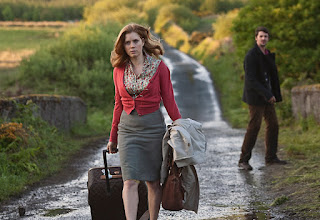 Leap Year (Anand Tucker, 2010) - While the prospect of a romantic comedy featuring the talents of Amy Adams and Adam Scott would usually make my heart, well, leap, the reviews of this one were for once enough to put me off. But then Mrs Rick decided she wanted to see it*, so we gave it a go. It's offensively unoriginal, just a tired reheating of the old It Happened One Night stock plot - with chunks of The MatchMaker stirred in - but after a terrible first half hour it picks up a little and by the end it had at least stopped getting on my nerves. Adams' character is too dislikeable for too long, Scott has little to do beyond a bland retread of his smug Step Brothers persona, and both the general plot and the individual jokes are appallingly predictable, but Matthew Goode is quite good as a love interest with odd patches missing from his scruffy beard, and there's nothing mean-spirited about it, aside from the fact that some studio accountant decided to make this unambitious, derivative film instead of any number of interesting scripts that will never see the light of day. Mrs Rick thought it was OK. (1.5)

*My superior half actually has impeccable taste - her favourite films are Colonel Blimp and Ninotchka - but she shares my romantic comedy weakness... only more so.

See also: The best retread of It Happened One Night is surely The Sure Thing, though I have a soft spot for Love on the Run too.
Posted by Rick Burin at 21:46