Banking on the Olympic dream 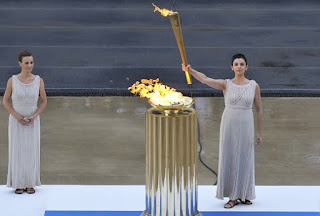 What is the official bank of the London 2012 Olympics?

Oh yes, I remember, because they drove a little musical van past us repeatedly as we were waiting patiently and expectantly for the torch parade. And then the sponsors sent in the big guns: an open-top bus with a shouty MC and a 10ft Beckham Head smoothing out at us from a video screen.

Even the impressively bendy woman wowing the crowds by walking like a crab was dressed in the official colours of the official bank, except for a patriotic wig. And it seemed a shame.

Because Harrogate had never seen anything like it: thousands upon thousands lining the streets to welcome the flame in a show of community spirit and unbridled enthusiasm about the possibilities of the summer games.

Yes there was free cola, but the Olympic dream seemed to be struggling to clamber out from under some hideous corporate nightmare and the crass Americanisms that threaten to invade every public event.

And then the flame arrived: an awestruck, unaffected kid grinning from ear to ear, clutching the outsized golden torch as he jogged along West Park, his smile growing ever larger as the deafening ovation rippled through the crowd.

I don't usually put news-y stuff on the blog, as most of the readers obviously aren't from Harrogate, but this seemed more universal, and I was quite pleased with it.
Posted by Rick Burin at 21:42