From Harrogate to Hollywood - An interview with Christian McKay

Christian McKay won acclaim for his big-screen role as Orson Welles. Now he’s coming to the district to perform a piano suite and discuss his career. He tells RICK BURIN about Orson, Spanish music and making his acting debut in a Harrogate panto. 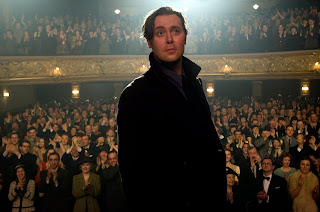 “My first job was a panto at Harrogate Theatre,” he says. “They gave me four parts, being cheap buggers, including an old man, Little John, Richard the Lionheart and a ghostly tree: Mandragora.

“I got caught in the trap door and carried on. It prepared me very well for the RSC.”

The date was November 2001 and the show was Babes in the Wood.

“Every audience for the panto is completely different - you have to get a feel for what they’re laughing at and play up to that,” he said at the time.

The Advertiser billed him as a concert pianist making his acting debut. It was his talent for music that had manifested itself first.

As a child, Bury-born McKay was a chorister at Manchester Cathedral and studied piano at Chetham’s, where the instrument became “the focal point of my life, through my Polish piano tutor screaming at me”. At the age of 21, he performed Rachmaninov’s Piano Concerto No. 3.

Drama, meanwhile, was a hobby. Then, after musical courses at the University of York, the Royal College of Music and Queensland Conservatorium, McKay went for an audition at the Royal Academy of Dramatic Art (RADA).

He ended up spending three years there. “Suddenly the acting took over and my concerts dwindled,” he says.

Even so, he left a first year movement class (“doing all ridiculous things like being a tree”), telling his classmates he was visiting his parents, to catch a plane to the continent. “I played a festival on Saturday night and on Monday morning I was back at RADA, playing a snake, rolling around on the floor,” he says.

His big break as an actor came in 2007, when independent filmmaker Richard Linklater - the director of Before Sunrise and School of Rock - came to watch his one-man show, Rosebud.

Linklater was planning a film about Orson Welles and McKay was playing the booming polymath every night, at a small, off-Broadway theatre.

“Of course, I never wanted to play Orson. I wanted to play Churchill,” he says. “It just came about through unemployment. I was with a couple of mates, I had never played a real-life character and I thought: ‘How’s about doing a one-man show?’

He considered Richard Burton (he breaks into a note-perfect impression), Peter Sellers or Alec Guinness, “but it always kept coming back to Welles”.

“I didn’t know anything about him, really, only the highlights,” he says. “But I kind of fell in love with the old man.”

When he received a script for Linklater’s film, Me and Orson Welles, he was sceptical.

“I took it with a big, down-to-earth, Lancastrian pinch of salt,” he says. “Then he turned up. I thought: ‘You can’t possibly cast me, I’m an unknown, I want to remain that way.’”

When Linklater spoke to big producers, they’d say: “Get rid of the limey.” “Right up until the moment he said ‘action’, I thought they would get somebody else,” McKay says.

“Of course they changed their mind, all of them, when the reviews started coming in and the awards nominations... in their dickie bows.”

McKay’s performance in the film is simply phenomenal. Whether seducing his players via sweetly-spoken flattery or heaping opprobrium on them, slotting cherished sections of The Magnificent Ambersons into a radio serial or lamenting his amorphous, shallow nature, McKay is Welles.

He twinkles, yells, guffaws, postures and roars. And in that one moment of heartbreaking self-awareness, his Welles reveals a compulsive need to play the chameleon, saying: “If people can’t find you, they can’t dislike you.”

McKay won three awards and was nominated for 13 others, as the wave of acclaim saw him rub shoulders with Hollywood royalty. “I was on the red carpet doing some interview and I looked around: on one side was George Clooney, on the other was Meryl Streep, and there was the Hollywood sign,” he says. “I thought: ‘This will probably never happen to me again.’”

Maybe not, given that he got bored during the ceremony and headed out the back to chat with the chauffeurs and cooks, almost missing his moment in the spotlight. He was returned to his seat by a gruff American, shouting: ‘You, the Orson Welles guy!’ 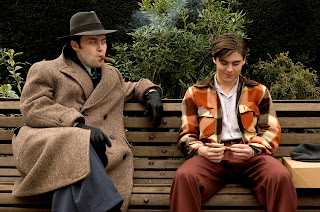 McKay says playing Welles was “the most extraordinary rollercoaster”.

Having turned down four offers to revive the role on screen, he’s now planning a film about Welles’ later life. Is it easy to slip into the character? “I can’t,” he says. “I’ve completely lost him, which is good.”

The role hasn’t helped his career as much as he might have hoped. “I would go to auditions and they’d say: ‘We can’t have Orson Welles in the company’. I would say: ‘I’m not, I’m just a jobbing actor trying to get a job’,” he says.

“In terms of personality, you couldn’t get two people more dissimilar. I met his daughter and she said: ‘You would have got on great with Dad’ and I always claim that we wouldn’t have got on at all. I think he would have despised me. I would have thought him very rude.”

Then, recalling his time playing Welles, he adds with a laugh: “But occasionally we’ve met and got on.”

Smaller roles have followed. McKay featured in the Howard Marks biopic Mr. Nice, as an MI6 operative who recruits the drug smuggler for some low-level espionage - and lives to regret it.

“That was lovely, because I met Howard Marks at the premiere and we were wondering whether the character I played might have snuck in,” he says.

Then he appeared in Woody Allen’s film You Will Meet a Tall Dark Stranger, as one of Josh Brolin’s poker pals.

“I was greatly looking forward to meeting the great man,” he says. But he blew his chances by crushing Allen’s hand as he went to shake it, then cracking a joke the director didn’t understand, “a better gag than anything in the film”. “After that the camera was on my shoulder,” he says.

Despite his limited screentime, he says it was “a very interesting experience”, especially working with Brolin and Slumdog Millionaire actress Freda Pinto.

So how does he choose his roles? “When somebody like Mark Pellington - the director of the Mothman Prophecies and Arlington Road - rings you from America and says: ‘There’s a part I would like you to do’, you do it. You’re lucky to be asked,” he says.

“That’s the difference between American and British actors. A panto in Harrogate? Thanks very much, put me down. A couple of episodes of Coronation Street? Great.

“Perhaps it’s because we’re more versatile - that’s in our training.”

Speaking of Corrie, he’s particularly proud of The Road to Coronation Street, a BAFTA-winning drama about the soap’s origins, made by Brideshead Revisited director Charles Sturridge. “I just think he’s one of the greatest directors I have been lucky enough to work with,” he says. “It’s a lovely film.”

He has also completed a TV series about the Borgias. It’s a European production, not the American one starring Jeremy Irons. “I worked with his wife Sinéad at Stratford, though. I was her eunuch,” he says.

And then there is his labour of love: a film about the First World War Churchill, which McKay has begun writing, with an eye on a 2014 release date. “This is about when he failed and when he thought that his career was over,” he says.

“It would be wonderful to use all those lessons I learned about portraying a real person, because you don’t make an impression, you give the audience a flavour of the character, with little tricks and mannerisms.

“Winston Churchill had a lisp - and speech impediments are quite fashionable in terms of awards at the moment,” he adds with a chuckle.

But first he has some “music time”, while he and wife Emily - who live near Kent - are also expecting their first child. “We’re looking forward to a luxurious summer of music and nappies, all being well,” he says.

McKay returns to the Harrogate district this month for the Northern Aldborough Festival, where he’ll talk about his career and perform Enrique Granados’ piano suite Goyescas. He has played concerts in Yorkshire before, being introduced as ‘Christine McVay’ by one confused compère.

He fell in love with Goyescas as a teenager at Chetham’s, last performing it in public 14 years ago, in Brisbane, Australia.

The piece has a poignant history. “The piano suite was so successful that Granados turned it into an opera, and paid for it with his life,” McKay says. After a successful debut in New York, the composer was invited to play a recital at the White House, but his boat was torpedoed and he drowned.

“It’s absolutely tragic, it was the summation of his career; he had written this letter saying: ‘I feel like I’m now beginning my work’,” McKay says.

“It’s an extraordinary, multi-layered piece of music, very like the story of Spain and based on paintings by Goya. Probably the reason I love it so much is it’s like an opera for the piano, with music and drama going along hand in hand - which is what I do.”