The Visitor, the Army and filleting fish - Reviews #76 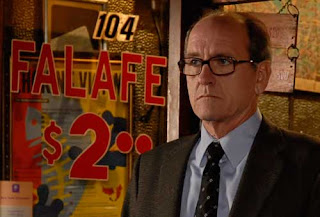 The Visitor (Thomas McCarthy, 2007) - After bit parts in Coen and Farrelly Brothers flicks, Richard Jenkins gets one of those once-in-a-lifetime roles, and gives one of those once-in-a-lifetime performances, in writer-director McCarthy's follow-up to The Station Agent. He plays a university professor coasting miserably, lazily through life and his infrequent lessons. Travelling to New York to present a paper he didn't even write, he's shaken from his stupor by a young Syrian drummer (Haaz Sleiman) who's been unwittingly living in Jenkins' city apartment. The film starts as a heartwarming comedy, as the pair bond over a shared love of music, then shifts into drama and tragedy after Sleiman is stopped by the cops in the underground.

McCarthy is a wonderful writer, with a great ear for dialogue, a complete resistance to melodrama and an ability to transmit hope and happiness in the face of hardship. There's also something of Jim Jarmusch in the way he celebrates humanity's common ground, rather than its petty and superficial differences. And once more he coaxes a startling turn from his lead actor, whose shift from moroseness to passion and compassion is a marvellous thing to behold, supported as it is by exceptional characterisations from Sleiman and screen mother Hiam Abbass. The Station Agent, with its pitch-perfect performances, distinctive visuals and level-headed script, was a tough act to follow, but McCarthy has done it, creating a mature, realistic and dramatically resonant movie that deals with the neglected subject of immigration whilst avoiding those diametric bugbears of triviality and worthiness. (4) 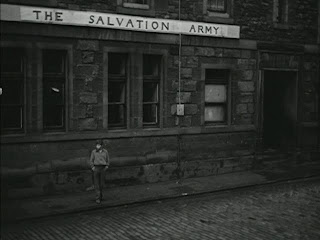 My Way Home (Bill Douglas, 1978) - "I want to die," repeats young Jamie (Stephen Archibald) over and over again, huddled on his bed in a Sally Army hostel, his tortured face smeared with dirt. "Thanks," he pipes up later, as a gay army pal kindly swaps their lunches, following Jamie's disastrous attempt to fillet a fish. They are the two key moments of release - one crippling, the other uplifting - in this unflinching portrait of internalised anguish and tentative hope, which completes director Douglas's astonishing autobiographical trilogy. The initial epiphany is a low: years of neglect and abandonment culminating in this flop-house breakdown, dominated by that bleakest of phrases. The second prefigures an upturn: a first friendship in a half-dozen years, and the undreamt-of possibility of a new home. All in all, this collection of scenes from Douglas's teenage years sees him indulge in apple-related larceny at a foster home, begin his first paid job by discarding his uniform in a public toilet and decamp to North Africa with the Army. Along the way there are fits of rage, fights with tedium ("I'm bored, I want to dae something," he repeatedly tells his army roommate; though he can never think quite what) and shards of solace. After all, why shouldn't he become a film director? Jamie might be out, but he's not down. My Way Home is the most technically accomplished film of the trilogy and, whilst never approaching the simple poetry of the extraordinary My Childhood, it's a better film than My Ain Folk, with a more coherent story and several simply wonderful vignettes. Knowing that this story was Douglas's own, and that Archibald himself wouldn't make it past 40, adds another level of poignancy to proceedings. As if that were necessary. (3.5)

Trivia note: The sudden switch to blisteringly hot climes foreshadows a similar jump in the director's only subsequent picture, the epic Comrades. 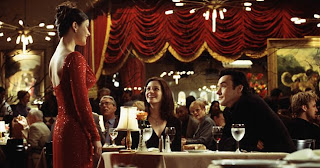 America's Sweethearts (Joe Roth, 2001) is a thin but amusing mainstream comedy, as former couple John Cusack and Catherine Zeta-Jones are reunited at the press junket for their final film, helmed by pretentious megalomaniac Christopher Walken. Also along for the ride is Zeta Jones' newly-slim sister and put-upon PA (Julia Roberts), who's got a bit of a thing for Cusack. There are some very funny scenes and lines ("Siegfried and Roy are here?" and "So I hit him in the tray with my face" being particular favourites), Cusack is pretty good value - for me, he's one of the most likeable and most underrated actors of recent decades - and there's fine comic support from Hank Azaria, Seth Green (who knew?) and Billy Crystal, the latter co-scripting. (3) 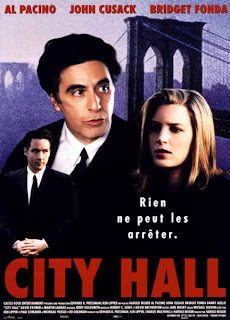 *SOME MINOR SPOILERS*
City Hall (Harold Becker, 1996) - A former New York deputy mayor, two noted Scorsese collaborators and the scriptwriter of One Flew Over the Cuckoo's Nest worked on the screenplay of this box-office flop. Perhaps that abundance of culinarians accounts for it being so muted, and so hopelessly muddled, with an uninvolving mystery and reams of faux-poetic rhetoric that doesn't really mean anything. Al Pacino's speech at the funeral of a six-year-old gun crime victim is a case in point. His performance is rousing, but the mayor's oration is not only completely self-serving and inappropriate, it's full of incomprehensible wordplay, bizarre syntax and metaphors that aren't metaphors. "That boy was as pure and as innocent... as the driven snow," Pacino yells. Innocent as the driven snow? That's not a real thing.

John Cusack, he of the fine back catalogue and improbably tiny mouth, plays the deputy mayor of New York. When a tough cop and a drug pusher with mafia links shoot one another - and then a six-year-old boy - Cusack and office veteran David Paymer start digging, and smell fish. There's the germ of a good film here, with an interesting insider view of politics and a mature final-reel treatment of back-room deal-making that avoids melodrama. There's also Pacino, who didn't do much of his best work in the '90s but is in commanding form, while Danny Aiello really does does look like a crooked politico. But the film never gets out of first gear - plodding along without tension, surprise or revelation - there's a terrible framing voiceover that has no relation to the actual picture and a risible, tacked-on romantic subplot with Cusack and lawyer Bridget Fonda, and the multitude of writers often seem to be copying wholesale from the Big Book of Political Quotations. (2)
Posted by Rick Burin at 13:42