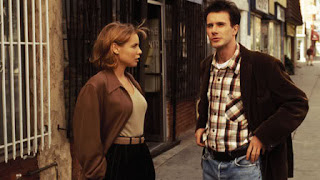 Kicking and Screaming (Noah Baumbach, 1995) - Baumbach's debut is an eloquent, funny and touching hybrid of Diner and Metropolitan, as a quartet of college graduates take their uneasy first steps in the real world. The plotting is unambitious - a failed relationship and an infidelity across 96 minutes - but the dialogue is excellent and the characters are very well-drawn. Chris Eigeman (who was the greatest thing about the peerless Metropolitan) is great in a typically sardonic role and Carlos Jacott drew raves for his antsy turn, though the absolute standouts are central couple Josh Hamilton and Olivia d'Abo - he insecure and subservient to the fates; she independent and heading to Prague. We begin with their bitchy, His Girl Friday-esque break-up, before the flowering of their romance unfolds in warm, idiosyncratic, wonderfully-photographed snapshots. Their chemistry is something else. Individually, they're mightily impressive. Together, sensational. (3.5)

See also: For a review of Baumbach's Greenberg, go here. 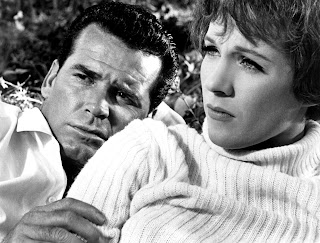 "The first dead man on Omaha Beach must be a sailor!"
*SOME SPOILERS*
The Americanisation of Emily (Arthur Hiller, 1964) - Paddy Chayefsky's script is as smart, subversive and original as they come, charting James Garner's journey from "dog robber" - procuring women, food and booze for the Navy's top brass, a world away from the front-line - to appallingly cowardly D-Day self-preservationist. It's a celebration of life itself, with an utter contempt for war and the lauding of sacrifice, complete with a superb romance between Garner and Julie Andrews, some choice observations about Anglo-American relations and a devastating supporting performance from Joyce Grenfell. Yes, devastating. And yes, Joyce Grenfell.

I've seen a fair few '50s and '60s war comedies and the majority have been trivial and underwhelming. Emily is the complete antidote to that: incredibly ambitious and intelligent, and sometimes very funny. It's nice when you're finding it difficult to keep up with such incredibly fast, heavy, polemical material, rather than being asked to go: "Ah hurr-hurr, they painted the boat pink." (3.5)

See also: '30s leading man, stage titan and Being There president Melvyn Douglas appears here as an admiral who is losing his mind. Find out about his career as a romantic comedy lead by perusing reviews of Tell No Tales, I Met Him in Paris, And So They Were Married and Our Wife. 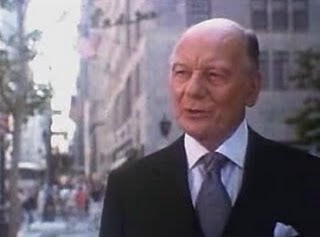 Arthur (Steve Gordon, 1981) - A drunken, self-pitying multi-millionaire (Dudley Moore) must choose between his inheritance and the love of his life (Liza Minnelli). That strong story is brought to life by excellent serio-comic performances from Moore and the wonderful John Gielgud - playing his butler and best friend - though the script is a bit flabby in places and Minnelli doesn't really cut it as a romantic lead. (3) 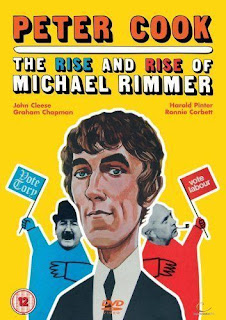 The Rise and Rise of Michael Rimmer (Kevin Billington, 1971) - Peter Cook is fine as a blank, glacial opinion pollster who uses decidedly Machiavellian methods to ascend the greasy pole of politics in this effective satire. The film has too many pointless, Python-esque diversions (most of the script was written by John Cleese and Graham Chapman), but builds to a spectacular, chilling climax - and there are brilliant jokes all over the place. "Yes?" enquires a receptionist as Rimmer enters an office building. "Yes," he replies, ascending the stairs. He entices rival Denholm Elliot to join his company by "jotting down a few reasons" he might like to switch. "Oh yes, I see, that's very well put," replies Elliott, looking at the cheque. "I particularly like the noughts." There's also the heckler ("Don't talk to me about 'unemployment', young man"), the glass of Fors and the identity parade ("Hello Whitey"), and it's pretty amusing that Cook supposedly asked the designer to make Rimmer's flat an exact copy of hated executive producer David Frost's, while insisting on slotting Frostian vacancies like: "Lovely to see you" into his supercilious patter. (3) 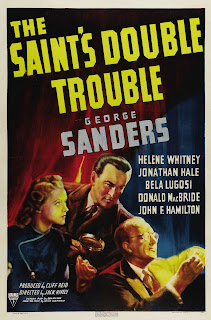 The Saint's Double Trouble (Jack Hively, 1940) - I'm a big fan of '40s mystery-comedy series like Boston Blackie, The Lone Wolf and Michael Shayne. Before becoming an exemplary character actor and the screen's finest cad, George Sanders starred in a couple of fun ones: The Saint and later The Falcon, where he was succeeded by his real-life brother, Tom Conway. (Interestingly, by far the best entries were made without Sanders: The Saint in New York, featuring Louis Hayward, and The Falcon Strikes Back, with Conway). The Saint films were generally marked by well-plotted storylines and a fast pace, but this entry is well below par. Sanders plays a dual role as hero Simon Templar and his nefarious doppleganger. It's an interesting idea, and the special effects aren't bad, but the story is confusing, the characters' actions make little sense and the great Bela Lugosi is utterly wasted in a nothing role. The film's main strength is Sanders' delightful delivery and his grown-up sparring with love interest Helene Whitney, who fears he's lost to cruelty and darkness. That makes for a highly satisfying kiss-off; it's a pity the rest is so muddled. (2)
Posted by Rick Burin at 13:40