The funniest film of all time? - Reviews #74 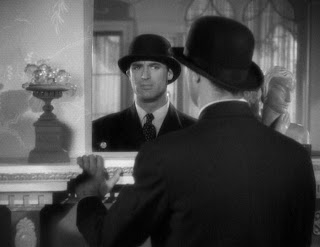 The Awful Truth (Leo McCarey, 1937) is perhaps the funniest film of all time - particularly in its first 50 minutes - as Cary Grant delivers an absolute masterclass in light comedy. Everything he does, from revelling in Ralph Bellamy's enthusiastically terrible nightclub dancing to trying on a hat, is just hysterical. His facial mannerisms, his throwaway delivery, his unexpected pratfalls - it's all just perfect. Grant plays a supposedly progressive husband who goes out of his "continental mind" upon discovering his wife's apparent infidelity, and begins divorce proceedings. Gloriously, his foil is Irene Dunne, who gave Myrna Loy a run for her money as the finest female American comic of the '30s. Her inimitable vibrato sigh, infectious laugh and playful persona are just a joy, her delighted lie that Jerry's family refer to him as "Jerry the Nipper", due to his endless tippling, merely one of a host of highlights.

Bellamy, forever the spare in these romantic triangles, also delivers a terrific characterisation. The scene in which he tries to laugh along with Grant's quips and misbehaviour, only to be silently told not to by Dunne, is a particular favourite. The cast is rounded out by Joyce Compton as a faux-Southern showgirl and Molly Lamont, playing a cipher of a socialite. The script, by female playright Viña Delmar, is sheer battle-of-the-sexes magic - magnificently conceived and executed - and there are flashes, fragments of effortlessly-judged sentiment scattered through the film, often in the most unlikely places, which make it all the more special. While the film loses its momentum a little in the last half hour - it's still funny, but it's not as frantically, breathlessly hilarious - the sweet ending, heavy in wordplay and Lubitsch-esque door gags, is original, appealing and even kinda sexy. (4)

Trivia note: The leads reunited for My Favourite Wife, which is less coherent and well-rounded but extremely funny, with another astonishing comic performance by Grant. There's a moment where he dashes out of a lobby phone booth, having pretended to be somewhere else, runs smack into his wife and instinctively emits a curious hum, that is just sublime.
Posted by Rick Burin at 15:02