Here are some more reviews. Irony fans will want to read on, as I've employed their favoured linguistic device twice. There's a couple of rude words in there too, so if that offends, steer clear. Unless you really like irony. 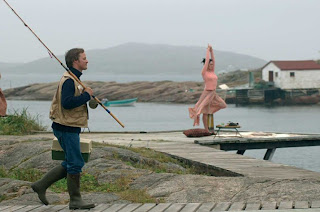 Seducing Doctor Lewis (Jean Francois Pouilot, 2003) - I saw this at the cinema when it came out. I liked it a lot then and I still do. It's a neat spin on the old city-slicker-is-won-over-by-small-town-life stock plot, which as we know is just about the best device going. Here, the little guys try every trick in the book to secure the services of coke-sniffing, foot-massaging, father-figure-seeking Doctor Lewis (David Boutin) and thus land the tupperware factory that will restore some dignity to their lives. There are lots of smart ideas and clever sequences (the cricket match, the big catch, the mass dash across town) along with some well-drawn characters who are both desperate and devious, while remaining likeable and engaging. Having seen how badly this sort of thing was done by Waking Ned only made me appreciate it more. It's not overly demanding and some will find it too gentle (I haven't mentioned yet how pleasant the scenery is), but to me it's the epitome of charm and there are some really great jokes. (3.5) 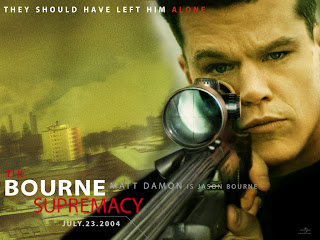 "Treadstone - tell me what it's all a-pout."

*SOME SPOILERS*
The Bourne Supremacy (Paul Greengrass, 2004) - A tour of the world's finest modern train stations, directed by that beardy yokel off of Heartbeat, and just as good as that sounds. Amnesia victim Jason Bourne (Matt Damon) is back in this exhilarating, globetrotting game of cat-and-homicidal-mouse-and-cat, hunting the criminals that offed his girlfriend, as he tries to clear his name of a double murder. It's punchy, gripping and superbly shot and edited, with a suitably sombre turn from Damon to hang the whole thing on. Only the climactic car chase goes on a bit. This is what you hoped Bond would be, but never was. I'm projecting again. (3.5) 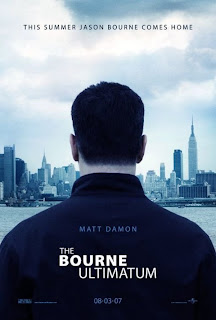 The Bourne Ultimatum (Paul Greengrass, 2007) - A dynamic conclusion to the trilogy, with Bourne (Matt Damon) striving to uncover his true identity, while being pursued by a succession of assassins. It's truly heart-pounding stuff: a series of extraordinary action sequences (some of them decidedly minimalist) interspersed with plot-heavy chatting and footage of Damon getting on and off trains and boats. The script is incredibly well-plotted and inventive, as Bourne battles guerilla-style against all-pervading surveillance, and the human drama is again agreeably understated, with Julia Stiles finally given something to do except get kidnapped, in a touching subplot. Again, the denouement isn't quite as strong as the rest, but that's my only gripe with this invigoratingly exciting movie. (3.5) "He's got a gun and great big man-tits/He's got jug ears and tiny trunks/Dame Judi Dench is furious with him/He's gone completely out to lunch...” By far the best things about Quantum of Solace (Marc Forster, 2008) are its spoof theme tunes by Adam and Joe. Viewed in the light of the last two Bourne – and indeed, 2006's Casino Royale – the film itself seems a little lacklustre, tentative and rushed, as if it was written in about 15 minutes. That's not to say it isn't diverting. Daniel Craig's portrayal of Bond as a pocket-sized hothead remains impressive, Judi Dench is a fine M – stern but fiercely protective in the schoolmarm-ish manner – and there are some fairly effective action sequences, including Bond wiping out a lift-full of British secret servicemen in five seconds flat. It's just a pity the plot isn't really up to it, as underwhelming David Mitchell-Peter Lorre hybrid Mathieu Amalric schemes to overthrow the Bolivian Government and steal its precious resources, belying his reputation as a philanthropist and environmentalist. Fucking environmentalists, trying to stop me driving a 4x4, flying to London and burning tyres in my front garden; they're clearly the greatest danger to the modern world. Clarkson told me. Decent coda, though. (2.5) 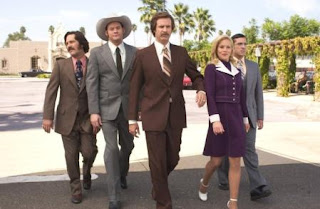 Anchorman: The Legend of Ron Burgundy (Adam McKay, 2004) - "When in Rome...", "Veronica had a very funny joke today!", "60 per cent of the time it works every time", "You know how to cut to the core of me, Baxter", "Agree to disagree", "Milk was a bad choice"... There are plenty of great lines and funny ideas in Anchorman, but it's unquestionably erratic, with some seriously dry spells and a supporting performance from Steve Carell that's completely undercut by the crass, offensive line about him being "mentally retarded". For fuck's sake - is that still considered OK? The story sees self-assured local news anchorman Will Ferrell and his office full of chauvinists thrown off kilter by a talented new arrival, who just happens to be a woman. This is as funny as I've seen Ferrell and there's a strong supporting cast, including Paul Rudd (who's always good value), David Koechner and whoever that blonde chick with the nice arse was. Whammy. (3) 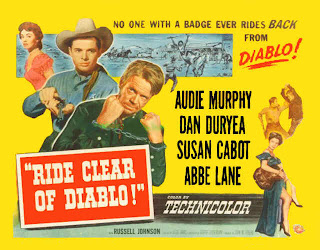 Ride Clear of Diablo (Jesse Hibbs, 1954) - A solidly entertaining Audie Murphy Western, one of a string of superior B movies starring the most decorated US soldier of WWII. Dan Duryea perhaps overdoes it this time, cackling away in his familiar supporting role like a parody of Richard Widmark in Kiss of Death, but he's always fun to watch and the movie is largely well-played and well-mounted (the church social is wonderfully-directed), with a cracking action climax. At least until Murphy decides to stop blasting away and rugby-tackle the baddie. (3) 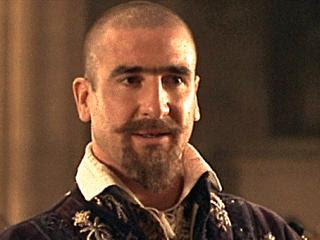 Cate Blanchett as Elizabeth I. I think. I can't be bothered to check.

Elizabeth (Shekhar Kapur, 1998) - Boring, confusing historical drama. Blanchett's quite good in the lead and there are a couple of moments that work (Edward Hardwicke's act of coat-y kindness, the final scene), but the script is poor and the eclectic cast (Eric Cantona, Angus Deayton, Lily Allen) offers very little. The tone is set by the opening exchanges, in which horrible spotty Queen Mary sits in her dark, airless attic, being all weird, while Elizabeth skips around in a field. (1.5) 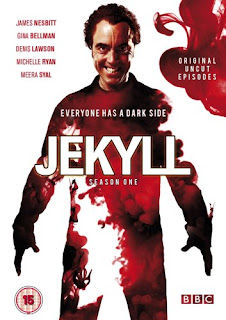 TV: Jekyll (2007) - This is another super series from the pen of Steven Moffat, a fusion of human drama, conspiracy thriller and blood-soaked horror. James Nesbitt is research scientist Dr Jackman, whose very special problem sees him forced into battle with scallies, shadowy Americans and his own unhinged alter-ego, the redoubtable Mr Hyde. The plotting is consistently inventive - sometimes dizzyingly so - right down to a killer twist near the end, though I'm not convinced the disparate elements quite slot together. As usual, Moffat provides a heap of memorable set-pieces and nifty one-liners. One of the things I admire most about him is his ability to reveal something terrible to the viewer a fraction of a second before it dawns on a character. It's a really difficult thing to pull off, but he does it effortlessly, most notably in episode four, with the knocking on the door and the ice-cream van jingle. He's also effective at subverting the previously innocuous - like the old nursery rhyme Boys and Girls Come Out to Play - but in a way that's largely removed from gimmickry and reveals something of his hero or villain. Nesbitt is really good value in the lead, whether underplaying sympathetically or camping it up outrageously, and there's effective support from Michelle Ryan, though there are a few iffy American accents about and I don't trust Gina Bellman as a dramatic actress. All in all, great fun, and I'd be well up for watching a second series. The show's big reveal is the third scariest thing I've ever seen on telly, after 1) Grotbags (when I was four) and 2) The "Psirens" episode of Red Dwarf (when I was nine). (3.5)
Posted by Rick Burin at 12:09