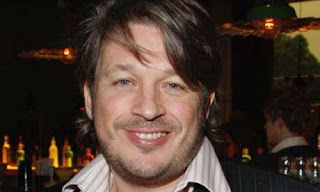 A ball of fire hits the stage of Harrogate Theatre and Richard Herring slumps to the floor.

“I do believe in you, God, ” he whimpers. “I’ve just been showing off, trying to impress girls.”

It’s the silly, whizz-bang climax to a two-hour show about Jesus that made me laugh harder than just about anything I’ve seen since Herring’s last visit to the town a year ago.

To me, he’s the best stand-up around at the moment. While his freeform internet broadcasts, written within a week or entirely improvised, are touched with brilliance, they’re also wildly erratic, almost by definition.

His touring shows, on the other hand, are honed night after night until they’re just about flawless.

Despite a few abrasive lines, this one isn’t the Christian-baiting shock-fest you might fear, but an incisive and entertaining look at Herring’s atheism and his apparently contradictory obsession with Jesus, boasting his usual strong suits of elevated pedantry and faux self-obsession.

In it, he offers his own aphorisms (which bear an uncanny resemblance to the opening lines of TV theme tunes) and parables (a succession of hysterical stories he penned as a child) and attempts to recruit some disciples.

“Ask me if I’m Jesus, ” he tells his first follower.

“Are you Jesus?” the man enquires.

“That is what you say, ” Herring replies.

The comic also tries to answer some of the big theological questions, like: “Why did Jesus always call Simon ‘Peter’? Is it like the way Trigger always called Rodney ‘Dave’?”

Three of his routines are so effective that the audience seems to be collectively willing him to stop so it can catch its breath.

Scrutinising the Ten Commandments, he laments the over-writing and confesses that he once failed to honour his father and mother, calling them “stupid plonker-wallies” to their faces.

Then he pours scorn on page one of Matthew’s gospel, adopting the persona of the disciple’s publisher to declare: “It’s rubbish, Matthew. Begat isn’t even a word.”

Herring knows what he’s talking about, incidentally. He spent four days memorising the opening genealogy, then five minutes on stage taking the mickey out of Booz of Rachab’s name.

Early in the second half, he launches into an inspired riff based on a letter he received about his show from an irate Christian, containing eight instances of people who’ve mocked God and then been brutally killed.

“This is definitely true, ” he says, moving on to the final example. “You can tell by the way none of the people have names and it obviously never happened.”

“Jesus did say: ‘If someone offends thee, send them a threatening passive-aggressive email’, ” he adds.

But Herring does concede that an extremely drunk heckler, who invites the whole audience to a party, may have been sent by God to punish him. When he isn’t removed, Herring speculates that he must be a local dignitary.

In fact, “God” intervenes in more showy fashion near the close, as the lights go off, there’s a small explosion and Herring immediately begins to mock-repent.

That takes us into the unexpectedly reverential final spiel, where the comedian becomes more serious, ultimately expressing his admiration for Jesus and for Christian values, detached from his distaste for organised religion.

Along with two extended dream sequences - in which Herring engages in a bike race with Jesus - it effectively crystallises the dichotomy at the heart of the show, if slowing the laugh-rate a little.

Early in the set he’d asked who really believed Jesus was the son of God.

I’m not really one for audience participation, but I figured this was quite important, so I raised my hand.

At the end, he asks from the stage if he’s managed to change my mind.