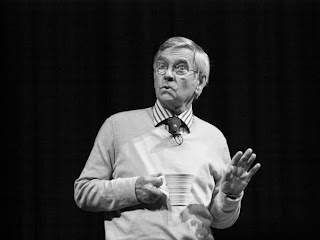 He’s midway through Philip Larkin’s seminal Audabe, and building up a head of steam.

“This is a special way of being afraid,” he says.
“No trick dispels. Religion used to try,
That vast, moth-eaten musical brocade
Created to pretend we never die.”

Pretending to Be Me, commissioned by the Larkin Society and first performed in Leeds in 2002, is a remarkable show that brings to life the late poet and Hull University librarian through a 90-minute, in-character monologue drawn from poems, articles and letters.

It offers hot jazz, an obscene anecdote about W. H. Auden and rules you can really live your life by, like: “Distrust any enterprise requiring new clothes.”

“It’s difficult to keep life at arm’s length, isn’t it?” it begins.

Courtenay’s Larkin is thoughtful, acerbic and twinklingly misanthropic, with a fondness for withering, throwaway one-liners aimed at revered institutions, rival poets and himself.

He says that getting married “is like agreeing to stand on one leg for the rest of your life”, dismisses “Ted ‘The Incredible Hulk’ Hughes” with his swaggering masculinity and leather jacket, and then turns his attention to America. Friends told him to only visit the east and west coasts.

“The rest is a desert full of bigots,” he wryly observes.

It’s Larkin’s reaction to the prospect of being a poet-in-resident at a US
university that lends the show its name. “I don’t want to go around pretending to be me,” he laments.

Courtenay, the stage and screen legend of Billy Liar, The Loneliness of the Long Distance Runner and The Dresser, and a fellow son of Hull, makes no effort to look like Larkin and uses a minimum of props; just the odd drink.

He talks about his childhood stammer, his family and his first forays into verse, then becomes more reflective, considering his ailing productivity, his public persona and - most movingly - his own mortality.

“Just imagine we’re sitting round in a condemned cell,” he says.

“Would we talk about the SDP and the price of fish?”

He concludes that we probably would.

But it’s when Courtenay performs the poems, seamlessly woven into the narrative, that he ups the ante, changing to a more flamboyant style of expression.

It’s as if it’s only when he’s writing that Larkin comes alive - and we see right into his soul.

Bolstering some of the myths around his life (“Deprivation is to me what daffodils were to Wordsworth”) and obliterating others, the show is illuminating, intriguing and ultimately captivating.

It reaches a climax with the poet’s declaration that the one line that sums up his oeuvre is not the potty-mouthed one about his parents, but the final sentiment of An Arundel Tomb: “What will survive of us is love.”