RICK BURIN is offended by two different shorts, each released during less enlightened times. Tell him to lighten up and acquire a grasp of social history. 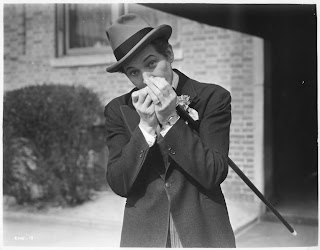 SHORT: Cupid Takes a Holiday (William Watson, 1938) is an OK Danny Kaye short (stop, stop, I'm killing me), with the star playing an implacable Russian who must wed before his 25th birthday - or else descend into madness. Mental illness, lol. Kaye is essentially doing Erik Rhodes in The Gay Divorcee and Top Hat (Italian accent and all), and quite well at that, as he courts a variety of '30s female archetypes. The material is very much hit and miss. Though a couple of Kaye's beaus raise a giggle, the final scene is - sadly - really unfunny and offensive, even given contemporaneous attitudes towards issues of mental health. (2)

SHORT: Reducing (Pete Smith, 1952) - I usually enjoy Smith's stuff, even when his voiceover crosses the thick line between elaborate wordplay and self-satisfied nonsense, but this is pretty weak, essentially consisting of him being rude about an overweight woman as we see her (fictionally) struggling to lose weight. It's unusually nasty and notably short on laughs - or interest. (1.5)
Posted by Rick Burin at 19:04