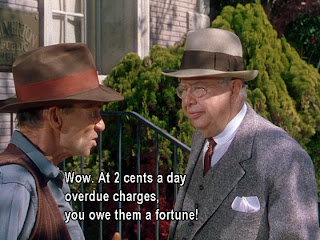 I'll be honest, there are a lot of SPOILERS in this review. I even mention the final scene.

Has Anybody Seen My Gal (Douglas Sirk, 1952) is a winning comedy from the soon-to-be master of romantic melodrama, Douglas Sirk, who went on to make the smash-hit "women's pictures" Magnificent Obsession and All That Heaven Allows. Just as those films pack a notable satirical bite, so Has Anybody Seen My Gal has a few choice things to say about greed and the worship of money, even if Sirk gets his message across in an overly broad manner. Charles Coburn, who could do "crustily avuncular" like no-one else in Hollywood, plays a multi-millionaire with a novel idea about what do with his will. Having made his fortune after losing the only girl he ever loved, he resolves to give the money to the late woman's family: daughter Lynn Bari, her husband Larry Gates - who runs a grocery store - and their likeable children, Piper Laurie, William Reynolds and Gigi Perreau. But he wants to make doubly sure he's doing the right thing, and inveigles his way into their household posing as a surrealist painter.

The film is extremely entertaining and the scriptwriters generally make the right decisions within scenes, knowing when to play for laughs (almost always), when to deliver a little jolt of emotion (like Coburn seeing a portrait of his lost love) and when to curtail an encounter. It's also genuinely funny, with Coburn an absolute joy as the film's good-hearted centre, alternately omniscient and naive. The scenes where he's reprimanded by judge Paul Harvey for supposed immorality are particularly strong and there's a hilarious, ridiculous sequence in which the paternal old cove is accused of necking with young woman Laurie in a cinema that's masterfully-handled. Coburn, in career-best form, also generates an easy chemistry with both the wide-eyed, red-headed Laurie (later of The Hustler, Carrie and Return to Oz) and the charming Perreau, who reminds me of Margaret O'Brien. Being a Douglas Sirk film, this one looks absolutely great, while it's also significant in movie history as the director's first teaming with frequent collaborator Rock Hudson (playing Laurie's soda jerk boyfriend) and for a blink-and-you'll-miss-it turn from James Dean as a kid ordering a soda. That's if it takes you 10 seconds to blink.

But the film falls short of greatness in several ways. The narrative, which sees Bari turn into a nouveau riche monster, is apt to offend people of all political persuasions, with the idea that money is evil being a socialist concept and the suggestion that poor people can't handle the paper stuff an old-fashioned right-wing one. There's also the problem of Bari's character, who is crucial to our investment in the story. Familiar as the "other woman" from countless Fox films of the '30s and early-'40s, the actress is poorly-cast in a badly-written role and delivers a one-dimensional and unsympathetic performance. Though the '20s setting is enthusiastically utilised, it's also a little synthetic, while little jokes about rising prices and changing fashions are largely meaningless today to all those without a PhD in early-20th century American history. Perhaps most frustratingly, the film ends in an unorthodox manner that doesn't suit the material, taking the peculiar decision to keep the identity of Coburn's millionaire a secret. A climactic unmasking has obvious comic and dramatic potential, but instead all we get is Coburn walking down the street and out of his adopted family's lives.

Has Anybody Seen My Gal is top entertainment, powered by Charles Coburn's lovely performance and packed with good jokes. But it's let down by the simplistic, slightly negative central message, Bari's weak characterisation and a refusal to play ball with its audience, which would have turned this period piece into prime Americana. (3)

Trivia note: The film's title refers to a '20s hit, sung here by a bunch of kids at a soda fountain. It's one of several tunes tossed into the mix, apparently at random.
Posted by Rick Burin at 13:23