Toot toot. That's the sound of my own trumpet. 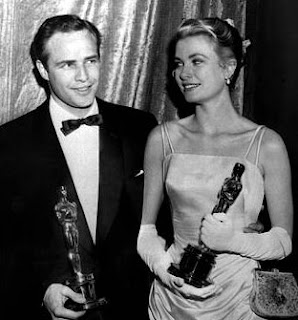 Yours truly (right) posing with Marlon Brando as the O2 Media Awards nominations were revealed. I just happened to have that Oscar with me.

I'm delighted to report that I've been nominated in a pair of categories at next month's O2 Media Awards for Yorkshire and the Humber. I'm up for Digital Journalist of the Year and Young Reporter of the Year (Weeklies). Readers who were with us back when we were called Films on Friday and appeared at www.harrogateadvertiser.co.uk might like to know that those weekly movie columns formed part of my portfolio for the digital award. I gave this blog a mention too.

The results will be revealed in a swanky event at The Loft in Leeds on Thursday, July 22.

Next up on this here blog is a round-up of the last 30-odd movies, shorts and teleplays I saw, featuring French noir and a man putting another man in the bin.
Posted by Rick Burin at 14:24