Here are a trio of 350-word reviews I've written for MovieMail over recent months. 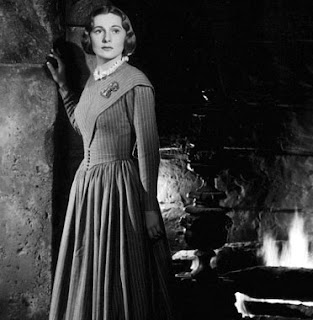 The history books will tell you Orson Welles received no directing credits in the four years between The Magnificent Ambersons – the 1942 masterpiece RKO so unwisely took its scissors to – and The Stranger, his only box-office success. But Welles’ prints are all over a pair of fascinating films made in the interim: the disorientating Journey Into Fear, and this richly atmospheric take on Charlotte Bronte’s novel.

It was during the shooting of Jane Eyre that Welles reportedly took to barging director Robert Stevenson away from the camera, helming the movie in all but name. The finished product, with its outlandish camera angles, chiaroscuro lighting and masterful sense of visual composition, would seem to bear this out.

The young Jane (Peggy Ann Garner) isn’t dealt much of a hand in life, having to contend with not one but two formidable golden age villains – Agnes Moorehead, the aunt who despises her, and Henry Daniell, playing the last word in fundamentalist bullies as the head of Jane’s school. But drawing on an inner steeliness, she wins through and, eight years on, leaves to find her own way in the world.

What the adult Jane (Joan Fontaine) finds is a position in a country manor owned by Edward Rochester (Orson Welles), a brooding, temperamental soul with a dark past. She’s instantly smitten, but what’s the banging and screaming going on behind those locked doors?

This flavourful adaptation focuses on the book's central romance, whilst retaining a dash of mystery and gothic intrigue that’s tastefully handled. Fontaine has just the right mixture of innocence and resolve as our heroine; and was there anyone who could deliver a self-hating bon mot better than Welles? “Are you never serious?” his fiancée asks. “Never more than at this moment, except perhaps when I’m eating my dinner,” he booms back.

The other contributors are just as impressive. Aldous Huxley worked on the screenplay, Bernard Herrmann did the music, and the supporting cast includes not only Margaret O’Brien – an Oscar winner as the year’s best juvenile performer for Meet Me in St Louis – but the young Elizabeth Taylor, as Jane’s ethereal, doomed school friend. (3)

To read about when we met Debbie Reynolds, please go here. Now here's a piece on one of her signature movies:

Tammy and the Bachelor (Joseph Pevney, 1957) 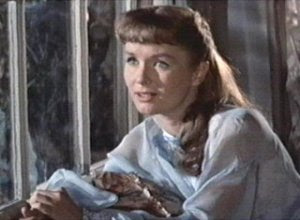 "I hear the cottonwoods whisperin' above; Tammy, Tammy, Tammy’s in love,” coos Debbie Reynolds as the camera moves over the rooms that rule a young boy’s life in Terence Davies’ The Long Day Closes. If you've ever wondered who inspired such misty-eyed devotion in the songstress and lent a heady sense of yearning to that key passage in British cinema, the answer can now be revealed. Leslie Nielsen. Yes, he's the wannabe tomato mogul who wins Reynolds' heart in the bright romantic comedy that introduced the song to the world.

Tammy (Reynolds) is a sheltered young woman living on a houseboat in the Mississippi swamps with grandpa Walter Brennan, a lay preacher peddling corn liquor on the side. Fishing downed flyer Nielsen from the swamp one day, the pair nurse him back to health, and Tammy becomes smitten. But Nielsen is soon on his way and it takes Brennan’s incarceration to thrust Tammy into high society, and into the arms of her square-jawed hero.

The fish-out-of-water set-up is pleasant, balanced by a genuinely touching romance. And has there ever been a more enchanting screen presence than Reynolds, with her wide-open face, soft ‘r’s and cartoonish sensibility? Her apparent guilelessness suits Tammy's talent for offbeat observation, while her distinctive voice lends an affecting homeliness to both her dialogue and song. The
Tammy number, performed by Reynolds as she gazes tenderly from her window, is three minutes of pure elation. Debbie’s comic smarts are also on display: witness the hilarious way she puckers up for the initially uninterested Nielsen, or deadpans expertly while talking sex with professor Sidney Blackmer.

This is an entertaining, affecting romantic comedy, boasting a simply lovely lead performance, and with an unequivocally fantastic pop song at its centre. (3) 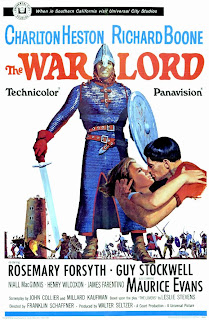 Norman war lord Charlton Heston is sent by Duke William of Ghent to keep a group of marsh-dwelling peasants in order, while protecting them from Frisian raiders. Instead, he falls for a blue-eyed pig farmer (Rosemary Forsyth) betrothed to one of his subjects, and all hell breaks loose. Aided by a duplicitous dwarf, the serfs decide to make peace with their pillaging tormentors and lay siege to Heston’s high tower, as the lord’s brooding brother (Guy Stockwell) stalks the stronghold, looking shifty.

Franklin J. Schaffner’s ambitious drama, set in the 11th century, is a genuinely unusual piece of work, with a rich period flavour and an intriguing plot that casts light on an under-served area of European history. The opening scenes are impressively creepy, paving the way for The Wicker Man in the way they tease and taunt the viewer: is Forsyth really a witch, or her people devil-worshippers? Then Schaffner shifts to character drama, coupled with an insightful look at Middle Age rituals, before leading us into the excellent action sequences, which appear utterly authentic. The superbly-paced siege, recalling the climax of George Stevens’ classic Gunga Din, must surely have informed Peter Jackson’s filming of the Helm’s Deep set-piece in The Two Towers.

Schaffner coaxes some great performances from his actors. Stockwell, continually peddling dreadful advice to his troubled sibling, is excellent in a showy role, displaying just the right mix of menace and quivering insecurity. But top honours go to Richard Boone, underplaying to maximum effect as Heston’s trusted lieutenant. As for Chuck, he’s well cast and adopts his popular persona, while there’s a chance for fans to hear him anticipate the most famous line of his career, complaining to Stockwell that he’s sick of “that damned dirty armour”.

The film is blessed with spectacular Panavision cinematography by Russell Metty and a breathtaking score from Jerome Moross. The music can be listened to in isolation on the DVD, interspersed with the soundtrack’s impressive effects, like a gargantuan, flaming wood pile rumbling deafeningly towards a fortress.

The War Lord is an absorbing, marvellously-photographed historical drama: offbeat, original and very satisfying. (3)
Posted by Rick Burin at 19:42