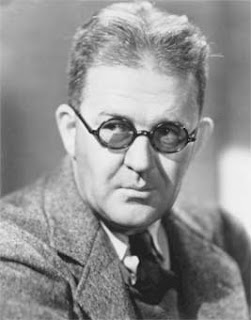 Some incredible news broke today. Film historians in New Zealand are celebrating the discovery of 75 classic American films, several of which have long been thought lost - including John Ford's Upstream.

The film was made during the short period in the director's life when he was trying to be someone else: namely the German director F.W. Murnau. In 1927 and '28, Ford spent weeks talking to the famed innovator - newly arrived in Hollywood - and studying him at work. Ford's 1928 film Four Sons (shot the previous year) is very obviously inspired by his then mentor, the melodramatic WWI narrative lit by dizzying directorial ticks and an uncharacteristically mobile camera. It retains traces of Ford's key thematic concerns, but the presentation is pure Murnau.

Ford's Upstream, which was filmed just before Four Sons, is thought to owe a similar debt to the German filmmaker, the stylistics this time lent to a lighter story about a Shakespearean actor and a woman who travels with a knife-throwing act.

The film is being restored, along with the rest of the newly-discovered collection.

To read about an alternate cut of Ford's My Darling Clementine, containing footage snipped from the final movie, please go here.
Posted by Rick Burin at 13:22