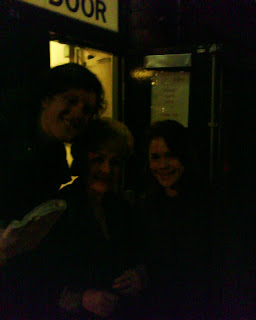 Debbie Reynolds is very much alive. The Singin' in the Rain star, who lit up countless '50s and '60s films with her soft 'r's, wide-open face and cartoonish sensibility, is billing herself as the great survivor - and it's hard to disagree. She's lasted 63 years in showbusiness, surviving three failed marriages and a bout of bankruptcy (her second husband gambled away $12m of her savings) to come out smiling. And singing. And occasionally rapping.

Thrust into movies aged 16 after winning a beauty contest, Debbie broke into musicals in 1950 despite having had little formal dance training and - whether singing, hoofing or acting in that big, charming way - proceeded to light up the screen opposite Gene Kelly, Fred Astaire, Jimmy Stewart, Sinatra and Dick Powell. As well as those great character players glimpsed in the pre-show slideshow, like Thelma Ritter and Walter Brennan.

Reynolds hadn't played in Britain since 1974 before embarking on this 17-date national tour, bookended by residencies in London. Returning aged 78, she exhibits a fine line in self-deprecation, alongside some unexpectedly catty and dirty fodder and a slew of jokes about her own mortality. She also shows off a solitary leg, maintaining "the rest of me is shot". But if there's one thing the young Reynolds was renowned for, it was her energy, and she's still got plenty in the tank.

The gossipy elements of this show, billed by Reynolds as a variety/vaudeville/live/in concert affair, are spliced with spirited musical medleys and engaging impressions. Clark Gable was the first film star she ever met, while she ignored Spencer Tracy's advice that she "be serious", after she met Ethel Merman. "I thought: be big!" Reynolds yells. It's served her well. Some of the barbs are smart, some less so, but it's undeniably satisfying to get the inside track from someone who really knew these legends. "I found out when I was in Norwich that James Stewart gave them a library," she says, before adding: "Cary Grant came from Bristol and he never gave them anything." Still, she named her daughter after him.

Reynolds does a mean (i.e. excellent) Jimmy Stewart and Barry Fitzgerald, then a mean (i.e. mean) Barbra Streisand, complete with absurd prosthetic nose, along with outlandish riffs on Kate Hepburn and Bette Davis. Backed by a pianist and drummer, who've been with her for 25 and 40 years in turn, Debbie slips into songs on a whim, performing more than 40 across the two-hour show. Her voice is deeper and less rangy than in her prime, but in pretty great nick considering her advanced years.

As well as concluding her Stewart impression with a lovely take on Home in the Meadow, which she sang in How the West Was Won some 48 years ago, she performs a jazz medley, a super tribute to her friend Judy Garland that climaxes with the unbeatable one-two of The Man That Got Away and Over the Rainbow, a string of Gershwin tunes and the show's unmissable highlight: classic clips from her flicks, with Reynolds crooning the tracks live.

There are the title tracks from Singin' in the Rain and The Tender Trap, along with All I Do Is Dream of You and the rousingly-received Good Morning (both from Singin' in the Rain), Dominique (from The Singing Nun, "which about six people saw") and a cut from The Unsinkable Molly Brown. It's not just uplifting, it's desperately moving, the passage of time adding an undercurrent of wistfulness and nostalgia to what's unmistakably intended as a celebratory routine. Sometimes it's hard to reconcile the guileless performer on the screen and the 78-year-old Debbie, with her conventional Hollywood razzle-dazzle, but every so often you see that familiar face through the paint and the years, and feel a little buzz.

It's a great show, despite some technical problems ("What am I going to do?" asks Reynolds in mock-exasperation as the screen fails to come down, "just sing Tammy for the next hour-and-a-half?") and a slip-of-the-tongue from Reynolds that implies she's in London. She made up for it by pouring praise upon the theatre. I hadn't been in the main hall of the Grand before. It is awesome. She climaxed the show with Tammy, the exultant smash hit from her 1957 movie Tammy and the Bachelor, also employed so memorably in Terence Davies' masterpiece, The Long Day Closes, then exited to a standing ovation.

After the show we decided to stick around by the stage door and wait for Debbie to come out. An hour less in bed for the chance to meet one of my favourite movie stars of all time seemed a fair trade-off. She was quieter, meeker and... smaller off-stage. We thanked her for all the great films and songs and told her how much we like The Affairs of Dobie Gillis, a phenomenally entertaining B musical starring Debbie, Bobby Van and Bob Fosse. She said thanks and added that it was "all a long time ago", which is true enough. She also expressed surprise at how young we were, though she'd appeared in 16 Hollywood films by the time she was 26. Then she signed a flyer and we had our pic taken, in the near-dark, with a low-res cameraphone. But we met her. There's the snap at the top. The girl with the movie star good looks on the right is my considerably better half. I'm the dopey one with the messy hair, clutching a pad full of scribbled notes.
Posted by Rick Burin at 14:30